... at 5am Bibik came into my room announcing Dayana had the combo: batuk + selsema + demam.

the great part was (alhamdulillah) she didn't kick up a fuss in downing her meds, she went back to sleep not long after. and miraculously enough, she seemed alot better by lunchtime.

yesterday FB and twitter were bombarded by parent's experiences on their child's first day of school... funny how i didn't notice this last year... bile nak anto anak sendiri baru la terhegeh2 nak eksaited/worried kan? haha. some kids macho je pergi skolah, tak nangis pun, some cried their lungs out, that got me wondering about Dayana, would she enjoy school?

after running errands with mil in the morning, we prepared Dayana for school. she seemed eksaited enough, she lit up at the sight of her new yellow+blue uniform, and let her use that ladybug backpack i bought during a GB to put an extra pair of clothes, as well as her milk (mana la tau, minah ni tetibe mogok nak susu ke @_@). she insisted on carrying her bag all by herself too. oh and wore that new pink shoes, too =P.

when i asked her if adik can follow or not, she replied: 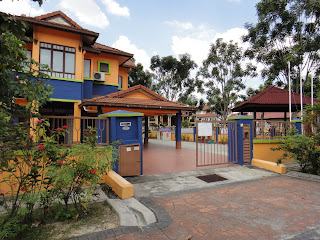 the school
once there, she immediately clamped up like how she does if she decides she doesn't want to willingly talk to you T__T. i guess she got culture-shock at seeing so many other kids her age cooped up in one place together. i stayed for abit to see how she'd fare. the teachers seemed friendly enough. 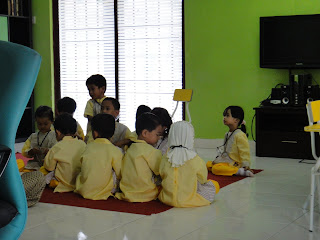 awal2 anti-social sedikit
they started the day with the simple things: some songs and story time (you wouldn't want the kids to be terrified on their first day of school, right? mwahahaha). Dayana didn't seem too willing to join in on the fun but she reluctantly did anyway, after encouragement from the teachers. i didn't stay for the whole 3.5 hours, because about an hour later Dayana came up to me asking for milk T__T. i asked her if it was ok if mommy went home first and come back later, she nodded ok. i was thinking she'd never fully participate in the activities if she knew i was around, so i left.

when i came back at 4.30pm, the first thing she said when she saw me was:

when i asked her what she learned at school today, she did this: 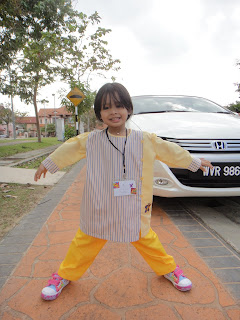 the letter ECKS! i think it's because the teachers put a nice sparkly 'X' on her name tag. lol. 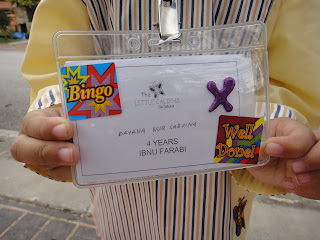 she got some stickers too! 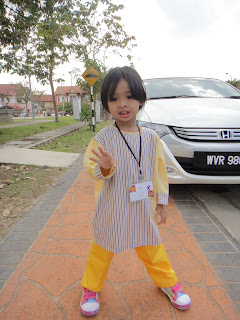 anyway, i asked her if she wanted to come again tomorrow, she said ok. so so far so good lah. phew =)

and then later at night i was lepakking in front of the tv when Dinara came up to me and sank her razer tooth canines into my leg.