and then i saw it: spotted the devil for the first time at Sooka Sentral. it's no wonder people are easily fooled. portraying innocence is its first class nature. taking advantage is second. third is not caring for anything or anyone except itself.

i wonder when such presence can be eliminated.
from my rose garden, E`n1x at 2:54 PM No comments:

woohoo. 5 months in, another 4 and more to go. gained 7kg. judging by the looks of it, i still don't really look as if i did. haha. Baby Centre UK on being pregnant at 20 weeks: 'You no doubt feel the kicking and somersaulting of your growing baby'.

last two weekends ago was when Baby first started having fun experimenting with movement. gave me weird tummy sensations at times especially at night when i wanted to get some sleep. makes the realization of another human being actually growing inside you seem more of a reality than just a feeling. hehe. watched a horror flick at home with Significant Other on Saturday night, so he suggested playing Mozart for Baby in order to drown out sounds from the movie. which i did. but then Baby starting doing movie action of its own. apparently halfway through the movie iTunes hanged at some point so i guess it got agitated. or maybe it just didn't enjoy Mozart. lol. Significant Other managed to get a feel of Baby's powerful kick. haha. then on sunday i went on an unhealthy food eating spree so i guess Baby got mad at me, it started to do acrobatics in the womb -.-

for the past week those sensations have been giving me a sense of excitement, especially since two of my friends gave birth last weekend. welcome to the world Aisha Marie and Zara Lailly Wardiah! =D suddenly you just can't wait for the 9th month, never mind that you haven't prepared a single thing for the arrival of the Baby, or that you can't ever imagine yourself being the ultimate Super Mommy, or that you never stopped to think of the pain that you might have to endure during delivery (actually, those thoughts have slipped through my mind. i just chose not to dwell on it yet until the 6th month =P). oh yeah, the bad side of being further along is i'm starting to get backaches and rib cramps. sigh. i really should improve my posture.

anywayyy, last weekend i bought a pair of maternity jeans, no thanks to the super encouraging sales girl. and gawd, are they expensive. Significant Other went off to learn more of his long-lost dream (and left me behind, much to my indignation) so i decided to console myself. so me and a friend of mine went 'window-shopping' at Subang Parade. apparently she did - i failed. lol. the other thing i bought that day was a pen from Sheaffer. I remember when Parker pen used to be famous back in our primary school days (as a noun? pronoun? gwah, i suck at grammar). bought a Sheaffer as father in law's birthday present recently and had in engraved, looked superfine so thought i might want one too. haha. so now i have my very own expensive pen =P ain't it sweet?

p/s. you must be thinking at this point, i have totally lost it. i probably have. haha.

downpour on a Tuesday evening

it's 6.30pm and it's raining heavily outside. i'm stuck at client's office waiting for the heavy downpour to let up a bit before i make my way towards home.

but what's the rush? not like there's anything interesting and exciting waiting for me at home. better yet, the electricity in the house must be out due to excess lightning. double boring.

and i'll probably get caught in the freeway jam anyhow.

think i'll be stuck here until the end of next week, after the MNP has launched. the pantry sucks big time here. lol. i gotta remember to bring something to munch on while i'm here. at least i get a good view of the outside, even though the scenery's a gigantic unfinished yet-to-be-completed building. haha.
from my rose garden, E`n1x at 6:25 PM No comments:

in my 18th week now. went for another visit to the Gynae yesterday. Baby's getting bigger now. baby bump is also more visible now. saw its outline and heartbeat through the scan. cute! still unable to determine the gender of Baby, much to Significant Other's disappointment =P. suddenly feeling psyched and can't wait for the arrival of Baby. Giffy is excited too. lol. bought a book entitled 'What to Expect When You're Expecting' by Heidi Murkoff, Arlene Eisenberg and Sandee Hathaway.

late in the evening stopped by Significant Other's office as he had some claims to settle, was merely there to keep him company. the next day was his department's Away Day so he gets a day off from work on Friday, which is so unfair 'cause i'm not following him and i have to work that day =(. anyway, met a longtime childhood friend of mine there. i think the last time i met her was in 1994 (so that's like wayyy long, right?). we used to stay in the same neighborhood and took tuition together. she looked just the same as ever to me =D my God, it was like 10.30pm on a Thursday night and she told me she had a meeting with a colleague. crazy.

so here i am today sitting in the office with mild back pains feeling bored. PC Fair started today so there are people swarming in big crowds to the Convention Centre. i dislike big crowds. but each time i get dragged by Significant Other to the fair without fail and end up buying rubbish. haha. later going to meet up with a friend regarding insurance. sigh. i wish i was going to the Celine Dion concert instead =D
from my rose garden, E`n1x at 2:15 PM No comments: 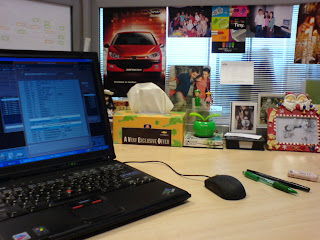 where i spend the hours in the office on weekdays
i absolutely have nothing better to do. two people are resigning from the team. feel like pulling my hair out due to the many changes being carried out. how to cope???
from my rose garden, E`n1x at 7:36 PM No comments:

this entry is dedicated to my cat, Jack, who recently passed away due to kidney failure. my Mom really misses him. with his bushy tail, he looks like a rabbit. really manja with my Mom, and scampers away to hide at the sound of my Dad's voice. has his own private toilet, and thinks that my bed is some sort of luxury toilet to him or something. Jack always stayed close to home. 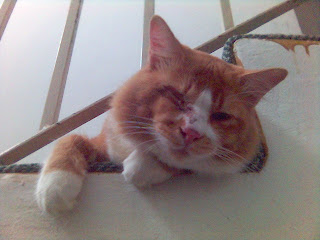 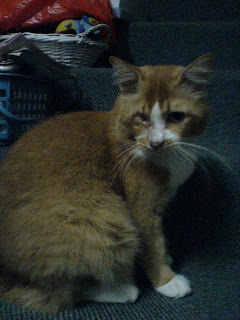 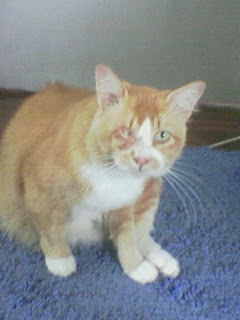 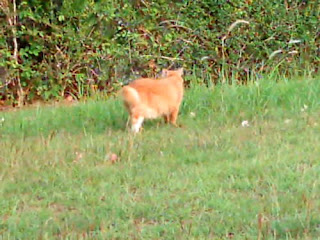