i find it a bit corny to post birthday shoutouts, especially since they don't even know the existence of this blog (and i hope to keep it that way =P)

anyhoo, yesterday (30th) was my mil's birthday. we celebrated at Victoria Station, USJ Taipan. we brought Dayana along, who still wasn't keen on settling in her car seat. i was lucky i could pump 4oz of milk from one side before we left the house; she drank almost 3.5oz while we were there just so that she would keep quiet and sit peacefully in her car seat while we finished our meal. she's clever to know that the pacifier will produce absolutely nothing, hence the preference of the bottle to the pacifier *smacks forehead*. the waiter recommended me Spare Ribs, so i had that (i don't really have a particular favorite steak dish in mind), i think Significant Other had Rib Eye, my mil had T-Bone, and my fil had Lobster (all these ramblings are from memory. i dunno if i'm even correct and i have no idea what my siblings in law had, haha). we bought my mil a pair of diamond stud earrings, which she liked (thank God. i fail at present buying).

today is my Dad's birthday. happy birthday Daddy! i hope to save up enough so that i can get something he would like (pst pst Aya... nak chip in tak? =P). i am currently broke at the moment due to the extra addition to the family (also because i'm now paying back my dues). my Dad's born on Halloween. i remember when i was young and in the States we used to carve pumpkins and put lanterns in it. i don't think i've ever seen a decent sized pumpkin in Malaysia though. hmmm, come to think of it... do i like pumpkin pie? 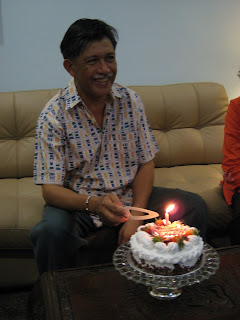 Daddy =D
i just realized i have a few people in the family who are born on very interesting days in the year. like for instance, Dayana is two months old today too. she's born on Merdeka day. kewl eh? =P. and Significant Other's grandmother is born on Christmas! me? i'm born on an almost ordinary day but in the most fabulous month ever: sweet November! hehe.

oh yes... happy halloween! don't get scared out of your wits! and mind you... be careful if you're planning on going trick-or-treating =D
from my rose garden, E`n1x at 2:09 AM 1 comment: 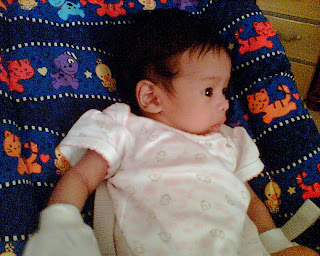 preoccupied with the telly 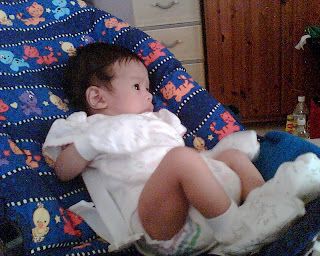 chillin' in her Fisher Price bouncer
what my little one was up to yesterday evening: watching the telly! (kecik-kecik sudah pandai tengok tv, astaga! eg-gad! akh-tu-leek!).

today we took her for her overdue one month Dr.'s appointment. she was in snooze mode as we made our way to the Dr.'s office, and was still in blur mode as the Dr. poked and prodded her, that is, until she had her first booster shot on her left thigh.

yep, that woke her up alright. heehee.

one more week and my little Dayana will be two months old. i'm worried that her weight hasn't increased much. she's now 2.95kg. a little bit on the small side, but they say it might be due to the fact that her mom is on the small size too. i think not. guess i'm gonna hafta sumbat her with more milk? lol.

dayana now seems to recognize faces and loves peering intently at anything that fascinates her. one thing that fascinates me, however, is how she seems to prefer Daddy more than me. what gives!? he gets the smiles, the baby babble talk and she quiets down as soon as she hears his voice when he comes back from work. poor Mommy. she gets all the cries, sleepless nights and dirty diapers. i read in someone's blog about this girl's baby who also had the same preference, but her baby couldn't ignore her completely because she is one thing that her husband is not: she's the milk factory! ahahahahaha =P

dayana likes bath time now. she doesn't throw a fuss as she did last time, although she'll make a fuss after i take her out of the tub T_T. sometimes she'll suck her fingers to occupy herself while i bathe her. when we put her in her bouncer she'll stay quiet for a while until she kicks up a fuss. she'll stay quiet longer if Daddy puts her in the bouncer and if we totally ignore her. she's a very light sleeper. she refuses to drop off to sleep by herself, which is a bit of a worry for me once i start work later on. i love it when she falls asleep in my arms =)

... i have yet to catch her smile on camera.

last weekend we brought her for her first outing to Ikea, The Curve and Tesco. Daddy was having a fun time pushing her around in her stroller. she was fine during most of the trip (she was busy sleeping since she didn't sleep the night before), until we got to our last stop. we were halfway through our shopping list when she woke up and started wailing in the middle of Tesco. so we had to cut our trip short and go home. gosh, i'm still a bit terrified of bringing her out. what if she scream her lungs out in the middle of somewhere? =P
from my rose garden, E`n1x at 7:38 PM No comments: 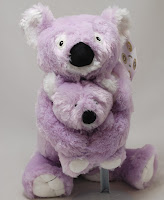 cute tak??? this is my recent online purchase, although this time i didn't buy for myself, it was more for Dayana =P (ok ok, i bought it mainly because it looked too cute for words, and Farrah's entry on her monkey really intrigued me to get one for myself). imagine my excitement when i received it in the mail! *grin*
i bought a Zoobies plushie from Tiny Tapir. mine's Khimba Koala and it's a limited edition apparently. i loOoOoOve the color, and it comes with a little bub of her own. it's a 3-in-1 thing; it's a soft plush toy, a pillow, and it even has its own matching paster purple coral fleece blanket! i was a bit amazed at its size, though. i didn't think it would be THAT big. 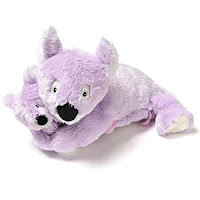 serves as a nice comfy pillow

contains a warm fluffy blankie inside!
from my rose garden, E`n1x at 10:08 PM 2 comments:

i remember during my pregnancy people took one look at my tummy and asked me whether the baby was going to be a boy. in fact alot of people said judging from the looks of how i was carrying, it was gonna be a boy T_T. so much for old wives' tales, huh? (too bad i didn't bump into Beddy when i was pregnant. i'd loove to know what she'd guess).

i got a baby girl. whee! the good thing about having a girl is you get to 'diversify' her wardrobe instead of sticking to the boring standard boy colors and same ol' design. well, that's what i think =P although if i do get pregnant again, i hope that i get a boy, hehe. even sarah says she has no idea how to shop for a baby boy. i mean, how can u resist pink??? which got me to thinking... i have yet to find black baby outfits in the stores. in my mind i imagine them to be worn by them 'punk' babies. lol.

anyway, take a look at this photo: 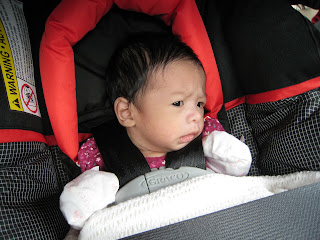 dayana's first car seat ride
apparently she doesn't enjoy being saddled in a car seat =P she's one month old in this pic! =*> my my, how fast time flies.

people take one look at this pic which i'm using as my display image on YM... and then congratulate me for my baby boy. jergh! even my ex-colleague who clearly knew i got a baby girl messaged me, 'so cute la your baby boy'. *strangle* T_T

i don't care what anyone says. my baby is the cutest! (although, every mom will say that of her own child kan? hahaha)
from my rose garden, E`n1x at 6:43 PM No comments:

Dayana is now One month old! isn't she adorable?? here are a couple of photos of her during the first day of Raya... (not yet finish pantang already jalan sakan, if any of you noticed =P~~~). i couldn't fit into most of my outfits yet (jeans and kebayas, especially) so i had to borrow something of mom's. so no new Raya outfits for me this year. hehe. 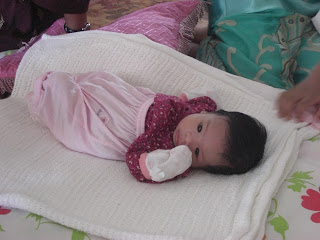 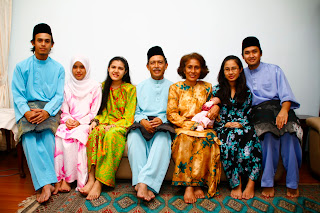 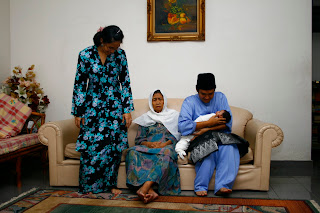 photo with Grandma (and she's still asleep!)
from my rose garden, E`n1x at 9:27 PM No comments: