gosh. i can't believe i consumed 2 packets of nasi goreng kampung today. true, it's a bit on the spicy side, and tastes a bit bland because it's ready made if you compare it with the ones you get at the hawker stalls, but when you're hungry and too busy to go for lunch (and broke!), this is the thing to get =D

i blame my ex-colleague hafiz for introducing me to this instant food item. one day he asked to my tapau for him two packets, and so i made a blur face at hime and i was like oookay since i've never even heard of this before (and even if i did, i wouldn't think it would be as tasty as he claimed it was).

now i'm hooked. haha. you can get it at cold storage for only rm2.31 tax inclusive. of course, there's a whole other variety of food, but i like this the best =P

lately i've been eating more and more as if i've grown 3 extra stomaches like a cow. haha. i'm already tired of munching. the other day after reading someone's blog i suddenly felt like having crab, so Significant Other brought me to Devil's Crab for a treat. love you hun, muaks :*) am now craving for sup daging with white rice. yummy~!

on another lovey dovey note, happy Valentine's day! i'm stuck at the office at 6.30pm eating nasi goreng kampung (my second round) waiting for the clock to turn 7.30 :\
from my rose garden, E`n1x at 6:21 PM No comments:

some people will never be happy with what they have. they will only be happy with what other people already own, that is, what's not theirs in the first place. they seem to think that they will be happy but in actuality they're just jealous of the fact that others have already found their source of happiness in life in comparison to their own soddy incomplete so-called life.

have you ever come across such person? they may seem to go unnoticed by the naked eye, but only those exposed to their true colors will know better.

a thought to ponder

probably the dead little critter found at the bottom of the pool thought it could walk on water or something. or it had aspired to try out for the Olympics, perhaps?
from my rose garden, E`n1x at 1:01 PM No comments:

after not going shopping spontaneously for quite some time, yesterday after work i went down and bought this: 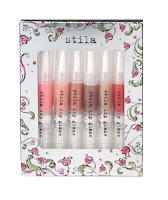 was available for sale last christmas but when my friend went to get it later it was already sold out. lol. anyhow, me and my colleagues were walking past the booth when i saw it on display again. apparently they had restocked, but there were only 5 sets left, the rest were reserved by stila-crazed customers. my colleagues decided not to buy because they had already gotten 2 tubes of the bigger size version worth rm85 each. me, on the other hand decided to go nuts without them knowing and snapped up a set. woohoo. the saleslady had me try on the plumping lip glaze. so far? i loike =D
from my rose garden, E`n1x at 7:50 PM No comments:

here's an account of the past few week's recent doings:

decided to buy one of those do-it-yourself test kits from a local pharmacy one weekend and try it out at home. lately there seemed to be an increase in appetite, which leads to tummy aches if food wasn't digested into the stomach at regular intervals. felt like a cow that time.

significant other would ask, "have i, or have i not" jokingly each day. i remember he used to say that he wanted a family the size of a football team (ok, i am exaggerating. but he did say he wanted a big nucleus family, same thing). anyway, like i suspected, the results came back which confirmed my suspicion and this got significant other to start thinking about whether or not he was ready to shoulder the new responsibility (he pulak anxiety attack. what the heck, he's not the one going through hormonal changes, ok?). i guess God granted his wish. lol.

anyhow, after 2 tests n still not yet fully convinced, went to see the Dr. so it's confirmed... the Dr didn't tell me anything much that i didn't know already anyway (an rm30 waste, if you ask me). 8 weeks in, expected due date a month from significant other's birthday... woohoo. on the way back in the car, he mentioned of plans to have the next kid 5 years after the firstborn. i reminded him of his original plan, but he laughed n said "we'll see" (hmm. i guess the expenses of actually having one finally sinked into his brain, and it wasn't gonna be as simple as he thought it would be!).

the mother in laws seemed excited with the news, got many advice not long after that. fil from egypt also advised not to take coffee. mil was happy that the february reception would be celebrated as three, hee. parents were happy i guess, hopefully. lol.

sickness seems to overwhelm during the evenings, so luckily could get through mornings with a clear head and a few biscuit meri in the stomache. yesterday threw up for the first time at the smell of mil's cooking. nothing looked out of the ordinary, in fact, dinner was great, only there was this overwhelming smell in the kitchen that got the better of me (and the contents of my stomach). there goes tea time's mashed potatoes. lol. could still eat properly with good appetite, so wasn't a great concern. wished the sickness would go away soon.

couldn't get much sleep lately. woke up in the middle of the night one time with a vivid dream about a colleague of mine who deliberately uninstalled ym messenger from my pc T_T. only realized it was just a dream after seeing my laptop safely in my bag, and remembering that my colleague is safely in australia. when i finally do get to catch a few winks, the alarm sounds. gwahhhh. snoozing does no justice either.

anyway, i still eat like cow, though not in one seating. i spend most of my money on food and have yet to schedule an appointment with the gynae. some have told that it was still too early to go, others advised to go for first visit since it's the first and all. confused~ @@ we might do so by the end of the month when i get the courage to set up an appointment.

need to prepare for the third reception this month. hopefully won't feel sick on the day itself, and hopefully everything will go smoothly (unlike last time O_O). most people in the office are in CNY mood and the bug seems to have been caught by me too. looking forward to the holidays =)
from my rose garden, E`n1x at 11:17 AM No comments: