my company held a Treasure Hunt competition last weekend, a day right after my birthday =D. the last time i participated in one was when i was still working with my previous company (and we somehow quite unexpectedly won first place woohoo). i love treasure hunts on wheels, it didn't matter if we won or lost, i enjoy just having fun running around like a headless chicken trying to solve riddles and stuff. haha.

i was supposed to have 4 people on my team, but at the last minute my friend V was warded and was unable to recover in time, so it was just the three of us: me, my deskmate and my former unimate who is now my officemate, haha. team name? BEN10 hahahahha (becuase we were Team #10, geddit). meden volunteered to drive, so i got the backseat all to myself.

mind you it's been awhile since i've attempted answering treasure hunt questions, you don't have to overthink things too much to get the answer. unfortunately that's what we ended up doing, hahahahhaha. then you start doubting your teammates' answers... and when you start panicking, keywords such as sounds like, initially, and whatnot can mean nuts, and then you start taking random photos of store signboards with the determination that you'll double back to the question later.

but trust me, YOU'LL NEVER GO BACK TO THAT QUESTION. there'd be too many photos in your camera roll and you'll lose track of which photos belong to what question. seriously, i had so many photos of store signboards in my camera roll that i don't even remember why i took them in the first place. then you finally start to realize time's running out so you'll start peeping at other teams trying to figure out which signboards they're staring at with the hopes that you'll telepathically figure out the answer.

or they might be as equally blur as you and it'll be like the blind leading the blind. just sayin'. haha.

midway there was a checkpoint @ Challenge#2 - Get Fit where we had to perform some exercises; i was given the task of pushups because according to my team members, i was the lightest so it would be much easier for me than it was for them. what they didn't know was i hadn't had a decent workout in a long while (in fact, NEVER); attempting 5 pushups alone was torture. i had to do... 20? 30 pushups? can't remember, i lost count.

the lunch checkpoint was at Restoran Pak Wan, somewhere in Sepang. if you google, it'll pop up. food's not bad.

the treasures were easy to figure out, but they weren't necessarily easy to find. do you know how many places we attempted to look for a certain brand of sardine? NUTS i tell you. when i finally did find it in a gigantic superstore (which was located totally out of the way from the treasure hunt sector), i heaved such a huge sigh of relief that i accidentally startled the old lady standing beside me haha. pastu kene marah dengan teammate because i is kemut for grabbing the smallest tin. LOL LOL

it was raining by the time we reached the final checkpoint to submit our answers. we had to perform another activity - shaking your booty to get ping pong balls fall out of a tissue box tied to your waist, sounds familiar? - before submitting our answers. and only then did i realize that during the flag off that morning, they handed us smart watches which we were required to wear during all that running around for extra points. bahahhahahahahhahahah. they were sitting nicely in the backseat the whole time. whoops. kene marah lagi. haha

we didn't win. there were some pretty hard core treasure hunters in the company ok, don't play-play. but that was okay. i had fun.

on the same day i was running around town creating havoc with my colleagues, my daughter was having orientation at her new school for next year. luckily i had my brother to help me out with this one. my girl is so big already!

because my birthday falls on a glorious Friday this year, i decided to celebrate myself in the office - the more the merrier, no? - by supporting local bakers on Instagram! =D i feel like this year has got me ballooning into a Zorb ball of the sorts no thanks to my foodie friends =P since you only turn each age once, why the heck not la kan. we diet next year, ok?

started the morning by dragging the girls on the team for breakfast at San Fran. it's Friday; who has the mood to work on a Friday morning? bahahahhaha. 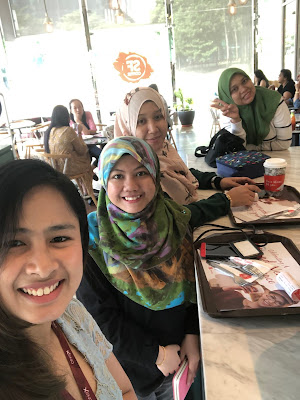 i ordered cream puffs and brownies from my friend Atie, who's @delia_delectables on Instagram. serious laaaa everything she bakes is sedap. too bad (or lucky for me, lul) that she stays at the other side of KL, if not i think i'd be ordering from her every other day. haha.

the mini chicken burgers in the image below i ordered from Zety who's @so.fluffeh on Instagram. i saw my friend order this for her kids and her photos looked so mouth-watering i just had to try this for myself. sedap ok this mini burgers. i seriously wish i had ordered more hahahhaha. 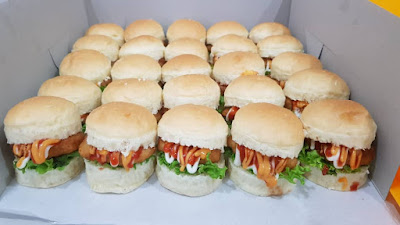 and then a couple of days later during the weekend i had a mini celebration at home when the cousins came over. them coming over is sort of like a twice a year (or so) ritual - the kids would be preoccupied with the Switch; the older occupants in the house would be busy stuffing their faces and onionning, haha.

happy birthday to meeeee =D
from my rose garden, E`n1x at 9:24 PM No comments: