aaaaand she's off to a new home, alhamdulillah. i have her in rs form so i'm not too sad about letting her go. 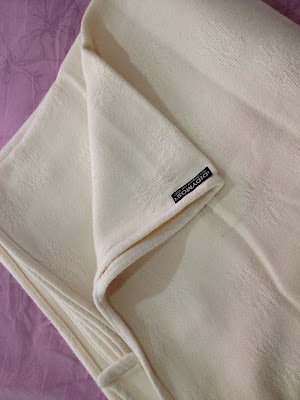 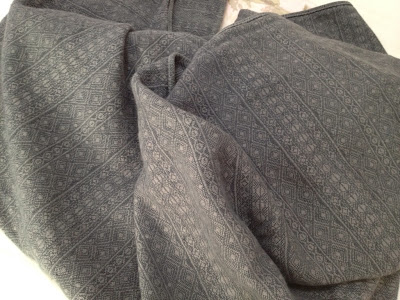 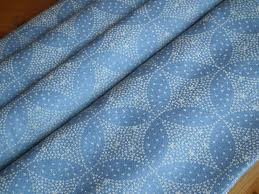 make me a princess

wasn't planned. Daddy wanted to get something for her and they were having a promo - if you buy rm80 above you'd get a makeover and a 4R photo for free. too bad we couldn't afford a whole freaking album, huhu. rm400+ seemed just abit over the top for about 10 - 12 photos. maybe next time, ok sweetie?

nevertheless, she enjoyed herself. she's a big girl now, can smile for the camera all by herself. especially the make up part. if given the chance she'd jahanamkan my whole make up set all on her own (which she and her sister did once, but luckily they only got hold of my blusher. she new exactly which part of her face to make up, unlike the younger one who assumed that her whole face was an open canvas for her to color on - too bad no photos -_-). it was a bit tricky to narrow down her photos to just one, so that's why we ended up with two (one photo cost rm30!!! @_@). wahhh buat duit la orang zaman skarang. chis.

adik wasn't around at the time. besides, i don't think she has the patience to look directly into the camera and smile for even just a few minutes.

i bought this Groupon recently and now i won't be utilizing it anymore because Significant Other has his own place to crash. so i wanted to see if anyone would be interested in purchasing this off my hands.

i bought this for rm188, would like to let this go for rm150. i've stayed at the hotel before. a good place to stay if you plan to be outdoors most of the time. 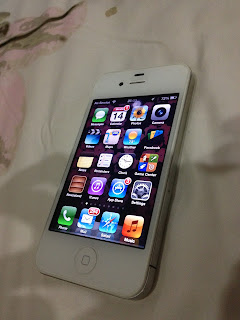 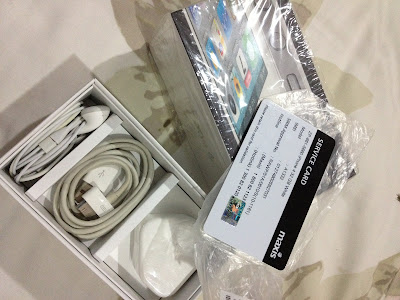 am selling this iPhone4 32GB white for rm1100 (purchased from Maxis in January 2012), price negotiable.

has been used with screen protector and casing, so phone is in good workable condition. please comment if interested. thanks!

haha i wish. we had dinner in KL je. no money to dine so far.

we were watching a show on tv the other day and the Coliseum came up. we haven't been there for such a long time. for one thing, it's located at jalan tar in the middle of the hustle and bustle of traffic. i haven't been into the heart of KL ever since i stopped working at the twin towers - kl traffic is not something i look forward to. the only available parking around the area is located behind the restaurant, an old overrated open-air car park with the possibility of your car getting bird-shitted being 99%. i can park a whole day at mv for the same price i park my car there for a mere 2 hours, more or less. huhu.

Coliseum is really old, everything about it is old-fashioned, including the people working there. after watching that segment on tv Significant Other urged the whole family to go for dinner there one Friday night, so we did. i haven't had a decent steak in awhile. if i go to the Ship i'd without fail order spaghetti + spinach, haha. bengong kan?

things have changed slightly since we were last there, but otherwise more or less the same. the people working there weren't 'old-looking' for starters haha. 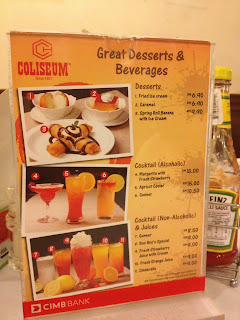 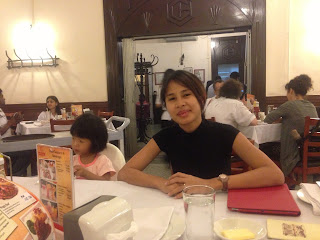 as for the main dishes, looks wasn't that good, however the taste was satisfactory. each steak came served with salad, potato wedges and steam cauliflower + broccoli. what was a bit disappointing was that each set no longer came with its own hot bun + butter. we had to order that separately, and even then they served us roti keping instead hahahahhahah. 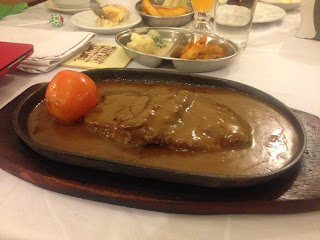 we each ordered a steak dish for ourselves (minus the children of course). each of us were given a bib to wear, minus mil who absolutely refused to don one on lol. Significant Other liked the food so much we actually ordered another set to share between the us. mil says the quality has depleted considerably compared to the last times she was there. 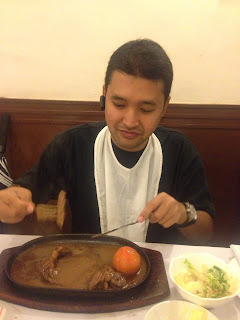 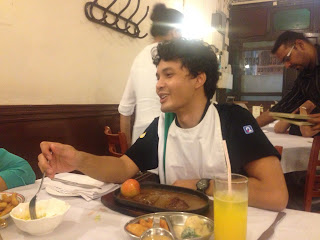 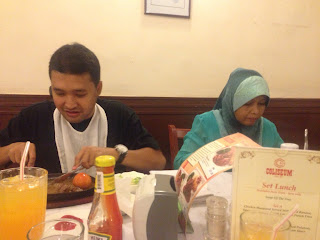 this little girl wanted rice. of course we didn't order rice, so we ordered mushroom soup for her instead (which came with bun + butter lol). she didn't even want to touch the steak until i kelentong that it was actually chicken, then only did she down almost 1/4 of my dinner. 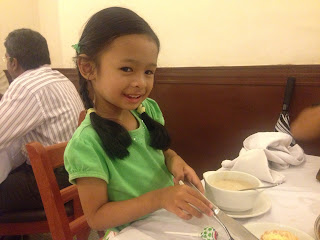 the little one insisted to feed herself as usual. and threw a tantrum each time i tried to take my iPhone away from her sighhhhhh. 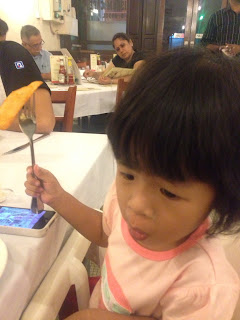 the desserts changed slightly, in a weird way. previously their fried banana fritters and ice cream were deemed delicious by us. we ordered two plates to share between us, but this was what came: 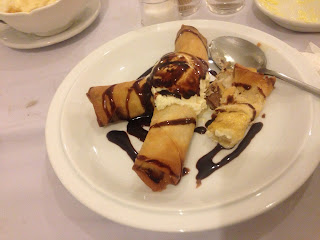 funny-looking banana popiahs served with ice cream. it was like eating a banana popiah, with the exception that the bananas were freezing cold T__T. so different from the fried bananas that were were accustomed to. PASS. although i must say, i polished off the popiahs, pregancy hormones punye pasal hahahahhaha.

the other dessert we tried was fried ice cream. Significant Other liked it. i didn't. looks like mashed potato with sauce to me lol. 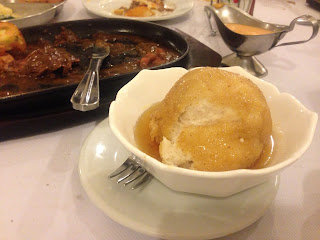 have you been there? you should give it a go. then let me know what you think of the food there. don't just take it from me =D
from my rose garden, E`n1x at 8:38 PM No comments:

whilst in the air

how's your new year everyone? 7 days in, anything bad or good happened? i'm awaiting to board my first flight of the year. since the new year, i've only been in the office twice =D. i am so not looking forward to 2011's review with the bosses, i would say i'm kinda 'enjoying' what i'm doing now compared to what i was doing previously but i'd rather not jinx it because i'm on loan to begin with and anything can happen once i've opened my big fat mouth.

ok so i may be kinda outdated, but this is my first time being in a plane that uses the video method for their safety information briefing, no kidding. is that common for a 737-800? since i'm flying weekday there weren't many passengers aboard, i practically got a whole row to myself. but there ain't much you can do on a 55-minute flight anyway except read Going Places, stare out the window (if you're travelling at night there really isn't much to see), indulge yourself with salted peanuts and orange juice. or you can blog in airplane mode and publish when you're safely on the ground again.

the kind flight attendant just handed me a whole bunch of salted peanuts to bring back haha. i remember the time i met my friend aboard another MAS flight and she did the same thing - she gave me a plastic bag full of nuts! lol (and dengan muka tak malu i took them all kah kah). so by all means, do generously take a handful of nuts when offered.

i wonder why my brother decided to quit his job doing aircraft maintenance, but i suppose he'd be much better off with a higher qualification, so let's hope he decides to work with planes again in the future =P (i pulak overexcited hahah). planes will always be somewhat of a mystery to me (forget the physics jargon of Bernoulli for a minute, aite?) because who would've thunked that a heavy piece of mahinery would be able to fly as if it could flap its mechanical wings like a bird? at 28,000 ft in the air?

Dinara calls them 'a-plane'. we have 6 plane models in the room so there's no reason for her not to recognize one. Dayana knows her Daddy goes off to study to fly a plane, but has never been on one herself. one day perhaps.

my youngest dah pandai mintak 'kay-yee' btw. she knows a carrier when she sees one, i have a bunch of them strewn around the room. trouble is Dayana would wanna up too, and she's heavy T___T (kakak kuat dengki dengan adik, sigh).

ok my flight just landed, no reward for guessing correctly where i've landed at =P. have a great evening ahead peeps. as for me, well let's say i think i'm gonna be literally be groping in the dark for awhile after this, bwahahahahah.
from my rose garden, E`n1x at 7:26 PM No comments: