the little one is 5 days old my how time flies and already i'm wishing she would stay that tiny forever.


a few things i've noticed about her almost a week after she's born:
- she's definitely a night owl. it's true when you say how she behaves in the womb will be brought over after she's born. in the womb she was dormant during the day but such a kicker in the night, you practically had to nudge her to get her up during my early morning ctg scans. now that's she's out she mostly snoozes through the day and gets mummy's butt up during the night with her frequent wakings @_@ adjusting a baby's timetable ain't that easy either. she never fails to wake up at 5am like clockwork - mommy's personal alarm clock for subuh lolz.
- did i mention she loves to poop? back when the elder two were teeny weeny i was busy worrying when they didn't poop for four days straight (and to expect a poopie explosion in the making), but for this little one i'm busy worrying whether pooping too much should be something to worry about lol (the homecare nurses told me that i shouldn't be worried). am so glad i don't have to deal with latching problems, she seems to know what to do all by herself.
- which brings me to another point - she's an impatient little one. she gets really red like a tomato if she doesn't get the boob when she wants it, or when she's unsettled (like too gassy or when she gets the hiccups or before a poop). she has very strong limbs too, if she's agitated her hands would be free from her swaddle, her mittens will go bye bye, socks pun ntah ke mana. aaaand her face will scrunch up right before she showcases her lung power. most of her hand-me-down mittens don't fit her well, they've probably loosened after previous heavy duty usage lol. can i donate them anywhere?
- she has the potential to not like bathing sessions. she puts up quite a fuss whenever i give her sponge baths, much like how Dayana was back then. you'd think she was going through torture or something. am patiently waiting for the cord to drop off before dunking her in the bathtub, apparently she had a really thick cord and it hasn't fallen off yet. three kids and i'm still unsure about cord care, heu~ the homecare nurses finally shed light on how i'm supposed to use the alcohol swabs you get from the hospital *smacks forehead in idiocy*.
- she's a swaddle baby, definitely. if she isn't swaddled she'll end up not sleeping. she's like Dayana in most ways, Dinara was ok with not being swaddled. she seems more comfortable being swaddled than letting her limbs go free. she also seems to like being held, she settles easier in my arms compared to putting her down immediately after a feed. i need smaller hand mittens, i gave up putting them on her because she never fails to take both of them off on her own -_- (no chance of me producing a michelin baby). swaddling prevents her from scratching her face with her super long nails which i am still afraid to cut at the moment hee~
- she spits up milk quite often, and burps alot. haha. was it something i ate? even Dayana and Dinara didn't have this problem. apparently if i don't burp her properly i'll probably end up sporting 'shushu' as my new perfume T___T. i'm not kidding. you'd have to wonder if she's getting enough milk. the homecare nurses told me that was normal (waddahel?) to frequently nurse her throughout the day so that she won't get winded and at the same time adjust her sleeping time. i took out my medela for the first time today after 3 years abandoning it, managed to get 3oz total from both boobs. i've forgotten which side produces more. must keep reminding myself to drink lots of water.
idso nursing wear for public use. any suggestions?

lol meet the latest addition to complete my own version of Charlie's Angels. 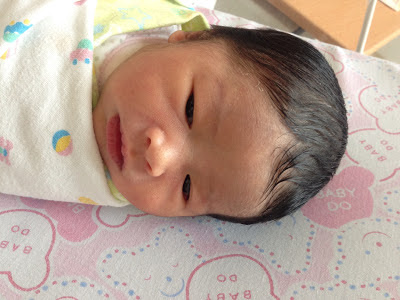 hello world! this is our baby Dxxxxx Nur xxxxx.
we're still deciding on a name for her though. HAHA.
i guess we were running out of ideas on what to name her. that's ok, plenty of time to finalize her name =D.
date May 13th, time 1347 hours. weight 2.6kg. length 51cm.
the meaning of her name? err we'll know when her fickle minded parents have decided on a name for her =P~.

like the first child, she also wanted to make her own mark in this world. especially after Daddy specifically told her to wait one more day before making her debut - her first act of defiance.
bahahahahaha...
from my rose garden, E`n1x at 11:03 PM No comments:

you know sometimes you wish for something, hopefully wanting it to come true?

well. i was shy 2-3 weeks away from my due date and by that time i was literally feeling like a whale - constantly out of breath, looking bloated and humungous, alternating between outfits because there was nothing in your closet flattering enough to wear, experiencing back pains, eyesight going out of whack due to unstable hormones, et cetera et cetera. heck my brain was in shutdown mode, i refused to allow new information enter my brain. i was already too tired to go to the office T__T.

the only thing that kept repeating through my head was: deliver. now.

if i ever have the privilege to be pregnant again in the near future, i'm just gonna tell everyone the actual due date of the delivery as told by my Doctor. i think i jinxed everything the moment i opened my big mouth saying that the baby might pop out by the end of April. whoever said that the EDD of subsequent pregnancies will be much earlier compared to your previous pregnancy(ies) is hogwash. week 38 and i'm still FAT.

did i tell you the baby never allows me to settle in a comfortable sleeping position at night? oooh she is one happy clam, depriving mommy of contractions whatsoever to indicate her arrival. i don't think i even experienced a single baxter hicks.

here's to another long wait. some people purposely go on maternity early to prepare for the little one's arrival, but if your little one still hasn't made an appearance by then, wouldn't those days go to waste? well that's me lah. whole point is to spend it WITH her, not with her still IN YOU haha.