cute tak =P Baby is now weighing about 1.4kg. that's still too light though. can't wait for the arrival of you =*> although i still got about a million things to settle beforehand. haiz...

gonna watch The Dark Knight this weekend. a friend of mine loved the movie to bits. we'll see. half of the cinema was already unavailable when i was purchasing my tickets online. i better watch all the movies that i can before the big D-day comes, i probably won't have my quality time after that.

tomorrow Significant Other's going for a preliminary eye test at Optimax. he plans to laser his eyes back into 2020 vision. haha. apparently i know three people who had already done it by that very same company, with very positive results (my Aunt, my cousin's soon-to-be husband, and my friend's boyfriend, who is surely looking 'hawt' by now =P). i wanna do it, but i'm unable to do so at the moment =(. anyway, one of the branches is having an offer, so might as well check it out while it still lasts. lasik is definitely not cheap. and so is braces, for that matter. i asked a junior how much he did his, he said back then it was about 3k+, but recently his sister did hers for 4k+. OMG. anyway, think about it. i'd be able to wear my sunnies without having to poke my eye just to insert my contacts (which i despice wearing, btw). you should've seen Significant Other trying to poke his own eyes out. 20 minutes passed and still no success (HAHA). but first we gotta go check to see if our eyes are compatible. my cousin's wasn't the last time she checked. i hope mine is *prays hard* =P

Significant Other has some dinner function tonight and he told me he'd be going for tennis until 2am. goodness knows what court actually opens in the wee hours of the night (or morning? T_T). undecided what i'd be having for dinner. recently my brother-in-law introduced me to instant onion flavored Roti Paratha, which he bought from Tesco. not bad actually. you just warm it up on the pan, and then voila! enjoy it with kuah Dahl that you can buy from the kedai mamak. quite nice actually. but i'm lazy to make the stop on my way home. hurmm...
from my rose garden, E`n1x at 6:16 PM 3 comments:

pissed by a stupid phone call

i'm rather pissed off by those people that call you on your phone with the intention of promoting whatever latest product or promotions that they have to offer. i wonder how they even get your phone number in the first place. but never mind that. it's the way that they promote and behave towards you is what makes me feel irritated to even listen to what they have to say in the first place.

like for instance yesterday i got a call from a specialist hospital in kl. previously i received a call from another hospital in Damansara and it wasn't my cup of tea, so i wasn't even remotely interested to listen to whatever it is this person had to say. so before he could launch into a fully detailed explanation, i politely told the person that i wasn't interested. and you know what? that idiot had the audacity to hang up on me mid-sentence. just like that. how rude! i mean, come on, you're the one that called in the first place with the intention of promoting something, so you're supposed to act courteous on the phone, disregarding if that person on the other side of the line is interested or not. i mean, wth!?

today i got another phone call from the same hospital, but this time from a woman instead. again, the same thing happened to me. the words 'not interested' barely left my mouth when she simply hung up on me. and didn't bother making small chat. how rude can those people be? omg, if any company plans to promote anything via the phone, they could at least hire more polite people. at this rate you're just giving the company a bad name. and who knows if they're genuine callers in the first place?

yeah, i was pissed. not only because i hadn't even wanted to receive such a call in the first place, but of how i was rudely hung up on when i should have the right to do so for disturbing my inner peace of mind. especially when you're feeling a bit rattled due to the fact that your client has been busy bugging you nonstop the whole day when you're actually no longer working on that account. jergh! see why i dislike taking the time to listen to all those insurance policies promotions and stuff like that?

i haven't been in a good mood lately. just recovered from a bad sore throat, a runny nose and a mild headache. my colleague said i shouldn't be pissed off too much, afraid later Baby will inherit that trait from me. lol.
from my rose garden, E`n1x at 12:21 PM No comments:

i can has backpain

yep... i'm starting to ache all over now. i think i've gained summore pounds since the last time i visited the Gynae. so i'm feeling the 'pull' of gravity now each time i trek up the stairs *huff puff wheeze*. bringing a pillow to office also seems useless, cause i'm still getting back and rib pains. i can't sit still now. i'm starting to blame this seat i'm sitting in. i'm in my 31st week now =D how fast time flies... (and i'm sooo not yet ready to become a mom).

i bought my pillow at Ikea that was a bit on the pricey side (which made me regret buying it. but then again i'd feel weird bringing a gigantic size pillow to office. people might think i come to work to sleep! haha). after paying my bills at Uptown yesterday i drove to Ikea for a solo dinner (Significant Other had a Dinner thingo so it was just me and Baby). so i got to eat my Daim cake, along with Swedish meatballs =) yummylicious! and brought home with me a desktop mirror, the abovementioned pillow and two curry puffs, lol.

last week, out of the blue, Significant Other bought me a new watch. it's a 2004 model, but i love it all the same =*> thanks hunny~ at the moment i can't fit into my GMS Casio which i bought during my Bangkok trip last year, unless i adjust the metal straps (which i'm lazy to do so). the last time Significant Other bought me a watch was as a present on my 23rd birthday, a pink Guess watch that i've always been eyeing but never had the chance to get it for myself. unfortunately evil theives broke into my aunt's place where i was staying at the time and the watch was one of the casualties, sob. 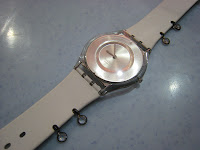 my new Swatch =)
i like my work now. probably because i'm now in a new project, so i guess you could say it's like starting on a clean slate =D however i'm still supporting my previous client, so i'm not yet totally out of the woods yet. at least my mood is improving. and no more credit card spending either. although recently i just paid for my car insurance and that practically sets it in stone that i'm broke for the month of July, haha (owh crap. which reminds me - did i set aside a small amount for my road tax? cheese!).

one thing though... where has my June payslip disappeared to???? i've already turned the drawers in my office upside down looking for it (and chucking old junk into the dustbin, clearing out unwanted rubbish along the way, hohoho). sigh. i hate it when i misplace things. i just hope that darn piece of paper will turn up somewhere sooner or later.

ETA: found the payslip amongst a bunch of papers whilst cleaning out my office desk in January 2010 lolz.
from my rose garden, E`n1x at 6:11 PM No comments: