i'm bored. let's talk fashion, shall we? (although, i might be the wrong person to talk about this topic. i have no sense of color coordination and i tend to be so fickle-minded).

i realize that i prefer to see and feel the merchandise in real life rather than randomly purchasing online and hoping for the best.

for one, you won't get yourself fooled by those pretty drop dead gorgeous models who wear them in photos and make them look so amazing, that you get overexcited so you immediately press the 'Add to Cart' button but end up being totally disappointed when you receive it in the mail because it doesn't make you look as thin as you thought it would be or that the material was not cut out as you hoped it would be.

haha. sarcastic, i know. but it's the truth. some people are meant to look pretty even while wearing a burlap sack, others have to try abit harder to shine. i'm part of the latter. i don't wake up in the morning looking like a hundred bucks. sometimes what looks good on on person may not necessarily look good on another. anyway models are meant to look good in anything they wear, if not how the heck are they gonna get their stuff to sell? and for all i know, they used photo enhancing apps like vscocam or 360 to make them look like human angels on earth. LOL.

i still hate them for looking effortlessly beautiful though. haha. i guess i should start unfollowing those instagram accounts now =P.

haters be haters,
players be players,
fakers be fakers,
bakers be bakers,
shake it off, shake it off,
woo hoo hoo.

anyway, i received the brochure for Scha X FV in the mail even before the collection was released. from the brochure, i'm not really a fan of her style but i have to admit, her collection are quite affordable if you compare her designs to some other brands that cost a lot more but didn't quite tickle my fancy material-wise. i wish her collection was physically available; vivy looks perfect in almost anything so i can't rely on her photos to make purchasing decisions haha. i often wonder if some of the more famous-er bloggers secretly get paid to review new collections.

i'm delighted that Scha X FV's collection are available in my sizing, just like Nora Danish for FV's collection is (although i have to say, i could barely move in her A-line skirt and Gary in the office actually noticed that i had trouble walking in it bahahah). some designers' interpretation of S size are overly underrated so i'm usually 'saved by default' from taking the plunge *roll eyes*.

heck, most of the designs were sold out fairly quick. i'm undecided as to which color i like best for the following design, what do you think?


last week i followed my friends to MAC. while the other two was busy dolling themselves up with eyeliners, i was busy taking a selfie:


i usually don't take selfies but i'm gonna pop soon and it's not always i see myself this fat, haha. i'm weighing about 53-54kg now at 37 weeks. anyway i discovered that MAC has a lip primer to prep your lips before wearing lippies. i find MAC lippies to be very dry and i always tend to steer towards matte lipsticks so with the combination of my super dry lips, it's like a disaster waiting to happen. this is definitely going into my wishlist one day.


T - 18 days to go. the pilot is kepala pusing because his schedule is packed for May. and i baru plan nak coax the baby to come out on XX May because i'd have an easier time recalling the first 8 digits of the IC number hahhahahahhahah.
from my rose garden, E`n1x at 5:45 PM No comments:

my husband is a big fan of Shakey's Mojos. i'm not sure if you've heard of them before, because i haven't, mainly because i was always a fan of Pizza Hut. well anyway, Mojos are simply fried potatoes mixed with some sort of secret seasoning that makes them simply awesome among the fans. go ahead, Google and see. you'd find a whole bunch of recipes on how to make them, but you'd have to experiment for yourself to see which one hits home.

i've tried making them quite awhile ago using some random recipe on the web, but i don't think it turned out quite the way the husband remembers it to be (i'm a fan of potato no more, especially after wolfing down so many of it during my first trimester with my third child).

recently he decided he wanted to have Mojos again (he's always looking for something to munch on while watching his favorite tv series T_T), so he handed me a recipe he found online and asked me to try it out and see, which required baking the potatoes first prior to frying. surprisingly, he likes how the potatoes turned out. i had to tweak it a little bit, because the recipe called for 6 big potatoes (takmo aku buat banyak2, nanti who gonna finish them??). so i'm jotting down here whatever i mixed into the seasoning below for future reference. i used local potatoes btw, i think if you use those russet ones or those bigger American ones, they'd taste even nicer? beats me =D. 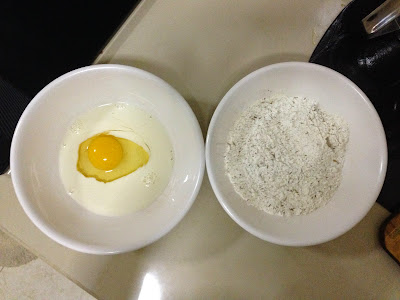 1. Rub olive oil onto the potatoes, wrap in foil and bake the potatoes at 200 C for about 50 mins or so, let cool.
2. Cut the potato into slices (how big you want them to be is up to you)
3. Heat oil.
4. Mix the flour, cayenne, paprika, thyme, garlic powder, salt and pepper to taste (adjust the seasonings to your liking, which i did. paprika wasn't called for in the recipe but my husband likes it spicy, so...)
5. Combine the milk and egg. Dip each potato slice into mixture then dredge thoroughly in the seasoned flour mixture (the recipe didn't call for egg either, but i thought it to be weird to not have egg to dip in =P).
6. Deep fry the potatoes without overcrowding, until crisp and golden.
7. Drain on paper towels and serve.
8. Season with more salt if you prefer your potatoes saltier lol lol but if you're health-conscious, then by all means skip this part.


ta-da! ok fine so maybe the photo doesn't look too appealing (i've lost my touch with taking awesome photography lately) but the taste was not bad, in my opinion lah. haha. the husband polished the bowl clean and later asked for more -____-.
from my rose garden, E`n1x at 11:58 AM No comments:

NOTE TO SELF: GET THIS DONE PRONTO.

i went for my 36th checkup yesterday and my Dr. had me do a CTG T____T. 2.4kg yo. i was like whaaaaa.? i haven't been having much of an appetite lately, where did those extra grams come from??? 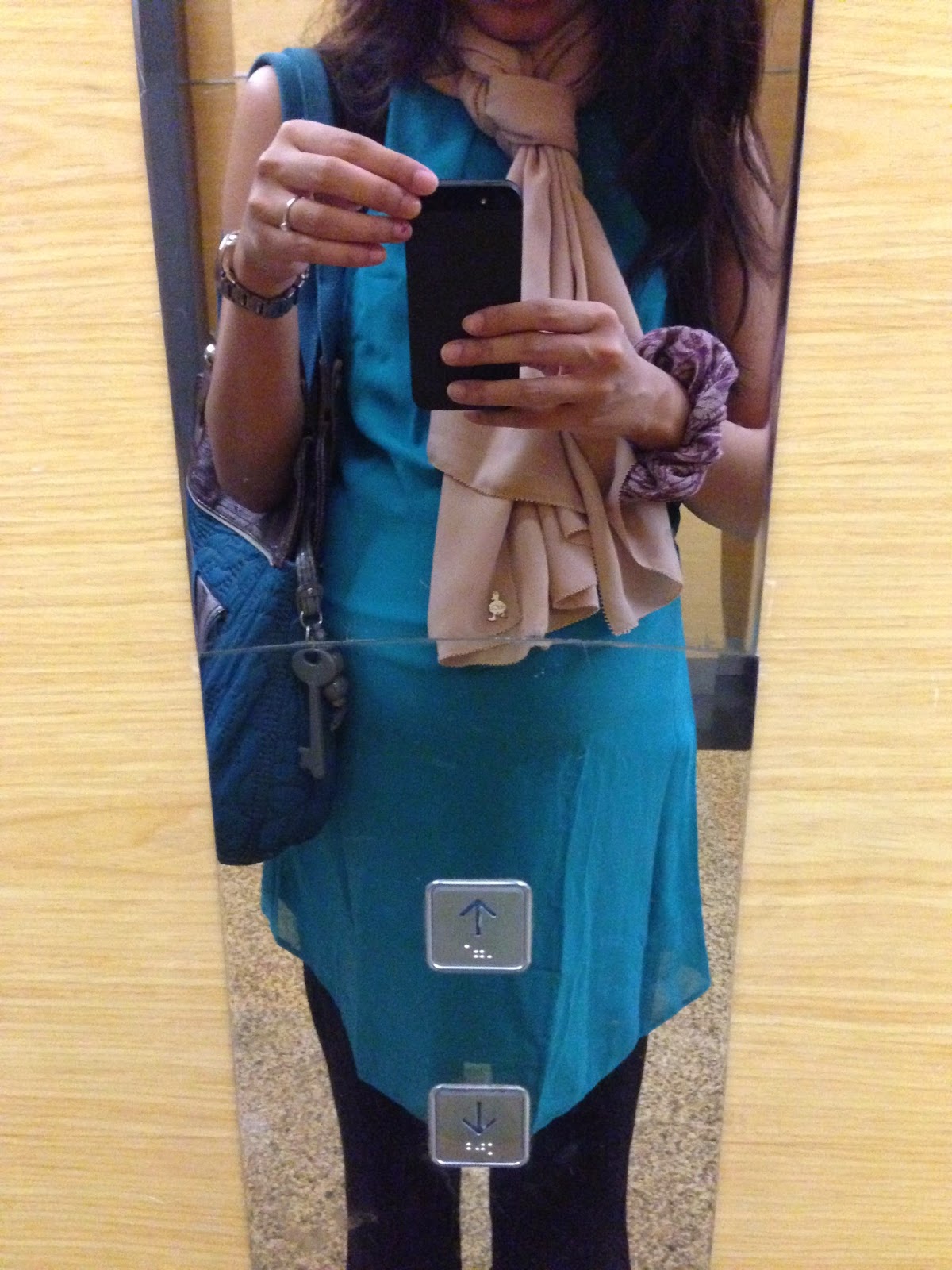 after so many times experiencing birth, my hospital bag checklist keeps on getting simpler and simpler.

mainly because you become wiser that you don't really need to pack your entire house, and also because by then you should be smart enough to differentiate between the necessities and the junkies.

so... here's my list. so that when the time comes i just have to click this post and voila, everything's there. i like to scribble on random scraps of paper and it's very annoying when i can never manage to find that particular piece of paper when i really need it. my boss has always been amused to see me doing this, especially when it comes to jotting down my work notes lol.

ta-da! that's it. now if only i have the mood to get started with going through the kids' old baby clothes to see what needs washing and what can be reused for the new baby. so malas T_T.
from my rose garden, E`n1x at 4:31 PM No comments:

Sophia's turning two next month. she weighs close to 10kg.
her current favorite spoken words are me-mey (lol), uh-oh, and oh NO.
when i come back from work, while the elder two had lots to report/complain to Mommy, dia pun sibuk nak kasi report in her own language which i don't understand, lol.
i am so not ready to give her up as my youngest yet. haha.

speaking of which, i am also not prepared to give birth! i have so many things to settle beforehand... so many things happened in the past few weeks which really took a toll on me. i haven't even packed my hospital bag -_____-. i have yet to identify my emergency contact person if the husband's on duty and can't make it back in time. the other day on my way home from work i was wondering what i would do if i had to pee while being stuck in traffic - worse case scenario is to stop at the curb and just do it (harhar), but what if i went into labor? pull over and push? ok let's hope that doesn't happen to me this time -_-. i've been very lucky for the past three pregnancies to be in close vicinity of the hospital when it happened.

Dinara contracted chicken pox two days ago. she must've gotten it from school, because not too long earlier the mother of her classmate announced in whatsapp that her son came down with chicken pox. and whaddya know, on Wednesday i came back from work to find her with little red welts on her face and back. a visit to the doctor and a temperature of 38 degrees Celsius confirmed that is was indeed chicken pox *sigh*. no school for her for the next 3 weeks it seems. another classmate of hers also came down with the chicken pox about the same time as her. it's like a chicken party!


i know nuts about treating chicken pox; apart from the itchy and scratchy show, it can be contagious and can threaten pregnancies if you haven't gotten chicken pox before. luckily i got the chicken pox wayyy back when i was young so i didn't have to worry much about me, but i did worry about the other two kids. could i handle 3 sick kids at the same time? let's hope that vaccination works wonders, eh? i think it's close to impossible to isolate one kid from the rest, unless you have a large glass aquarium you could keep the infected kid in for the next 5 days until the contagious period is over. i told the kids to stay clear of Dinara until she gets better but belum apa2 lagi my eldest was yelling her head off that Dinara sneezed in her face. sigh. and you think the youngest understood a word i said?

the kids' Nana came back from London last weekend and got them their own personalized chocolates. pretty ohsem, eh? naturally, all they cared is to keep them safely in their stomachs rather than admiring the personalized touch. lol. am i the only one not going nuts over nutella, btw?


these days the youngest thinks it's cool to stick out her tongue while taking selfies.


i met up with Noki the other day at mv. and that's the first time i've ever heard of telur sotong. selalu2lah singgah la mv la yek? =P