with the fourth kid (and especially after receiving yet another girl 4 times lucky lol), you tend to just recycle whatever you have assuming you've kept everything intact. everything poor Emma has worn are all hand-me-downs from her three older sisters. being born the biggest of the four, she outgrew the tiny sizes pretty quickly, probably due to the fact that she was born the longest length, but just as skinny as the rest. Emma's currently enjoying the life i secretly envy: sleeps most of the day (and turns owl at night -_-), demands milk whenever she pleases, release gas and spit ups so unladylike, and has a royal butler to pamper she soft butt every single day.


the Daddy secretly wants this job too haha.


well anyway, i'm up right now at 2am because i fell asleep earlier after waiting for Sophia to sleep first turned futile and woke up with a numb arm. the Daddy has to get up super early today to report for duty at 7am and apparently i'm his secondary alarm clock *sweat*.


i did get a few new things for the baby (and me) at the last minute, only after my gynae saikoed me that i could deliver anytime and asked was my hospital bag packed? i've forgotten how much interesting stuff you could find at a physical Fabulous Mom store (your online web is lousy btw) plus they're having a sale this month so how could i resist??!


for Emma:
i bought a baby binder, one that i kind of quite like because it actually fits my baby and it doesn't ride up like some other cokia brands i've bought before (that being said, i never binded my earlier three babies due to that factor). i bought a couple of mittens and booties for Emma which i find quite useless because irregardless of being old or new they still fly off Emma's hands (the old ones because the elastics were loose, and  the new ones were simply too big).


oh i got Emma new muslin cloths - printed ones! ladybugs and duckies! because the white ones are overrated... haha. and also because some of my old ones have been used to wipe goodness knows what so i'm using tha excuse to get new ones for the baby. new toiletries are a must, as well as diapers - i stuck to Drypers as what the other three have worn / are wearing (only because Tesco discontinued my favorite inhouse diaper). DEMC uses Huggies Ultra, which i also find to be ohsem but might ultimately burn a hole in my pocket in the long run.

it's not like Emma cares what i buy her, as long as she gets to demand and live like a boss, then she's a happy clam.


for me:
i needed more breast pads only because my old Avent ones were all yellowy and did i even want to reuse them even after failing to get them to look like new? O_o. i'm a fan of washable breast pads compared to disposable ones because i'd end up too sayang to dispose of them right away (as what i used to do with my contact lens last time; one-month? what one-month???) (don't follow me, my eyes were never made for contacts). i wanted to look for the Avent ones but i'm glad i couldn't find them; i find Tolly Jolly the most comfiest ones so far - they don't soak through like my Avent ones did, and the pads didn't stick to your nips either. i also bought two pairs of Fabulous Mom's branded pads but they tended to soak through too, also they were a tad bigger in size compared to the Avent and Tolly Jolly ones.


i bought myself a couple of cheap nursing tops from My Lovely Closet, the only nursingwear brand that i'm comfortable with. i also found this awesome air dry bag for my breast pump spare parts. this definitely beats storing them in a container while still wet and damp! aaaaand i can chuck in my bottles as well.

another new useful thing i got for myself that wasn't planned but i'm happy that i did was this awesome bengkung that homecare convinced me to buy during her visit to the house (which imo is ingenious, selling stuff to us innocent women who just gave birth and highly likely will end up buying it because we don't want to end up having flabby tummies hahahahhaha). in my defense, my current bengkung was falling apart anyway and was doing nothing to flatten my tummy fast enough. you know those 4-panel modern bengkung you can purchase online that uses velcro? yeah that was mine. while being a bit easier to wear than the traditional ikat2 one, it was quite a hassle to get a snug fit, because it was just one long stretch of elastic which you had to struggle to wrap around yourself. i had to pad it with a piece of cloth if not my tummy will end up all itchy due to the elastic.


the bengkung that homecare sold to me was also the velcro type, except that the back part was made out of soft material that was stitched to follow your body shape, one side consisted of three strips of velcro (this is what makes you to be able to get a snug fit) and the other side was made out of soft material for the velcro to stick. oooh i was instantly sold hahahahah what a sucker i am you thinks. but really, i like my new bengkung a lot, and i've worn it more religiously than i ever did with my old bengkung. it really feels like it's holding all my internal organs in place; what with all the horror stories people keep telling me about people's peranakan falling out and all -_- it's easy to wear too. price? rm80. i have no idea what brand is it though, it doesn't have a label.


i malas want to invest in nursing bras, simply because the good branded ones don't carry my size. i decided to try those cheapskate ones made in China instead. i bought a couple of buttoned ones during the last baby fair at mv for cheap; how i wish i had gotten a couple more, because the one with no underwire is super ohsem and comfortable to wear. but i don't even know what brand they are because there's no label, it's that cokia cheap hahahahaha. ish and i don't even remember the name of the booth i got it from T_T. next time booths should hand out their business cards to every purchaser so that nyanyuk buyers like me know where to go back to if they like what they've purchased. hee.


the last item i wanted to bebel about is the set bersalin that i'm using this time round. previously mil bought me the Set Bersalin Afiat three times in a row (three kan? ke two ek? dah lupa). i didn't really like it because i only ended up using less than half of the box's contents. i think i only enjoyed the Serai Wangi bath gel the most. and probably the Minyak Afiat because my mom uses it on bumps and bruises. so i ended up googling to see what set was worth getting, mildly out of curiosity because i've never bothered to do research before this. mil got me the Dherbs Set Bersalin this time (which i've never heard of before but apparently others have, even my mom who's not a social junkie lol), which i find wayyyy useful because i actually use most of the products in the set.

their pati herba taste really nice (like a sweet version of asam jawa),


the krim panas is really panas (i actually rubbed my nostrils after lathering it onto my tummy that i ended up with burning nostrils lol),


their feminine wash leaves you with a cooling sensation under there (though i wish it smells of serai =P),

just to name some of the items that i've utilized. i'm not sure what's the effect of wearing the bedak sejuk (previously known as param n pilis) apart from it smelling really nice. i'm on the fence on the mandian herba though, i tried throwing one sachet into a bucket of hut water as per instructions and don't quite see the effect on me. perhaps boiling it instead would make a difference? the only item i don't see myself using is the 'tungku' they provided, i heard it doesn't serve its purpose well. i think i benefited more with this brand than if i had gotten the Tanamera set because that one's mostly spa based and i'm not much of a DIY fan.


so that's confinement day 14 for you. many many many days to go. i've been dreaming of chocolate cream chip and caramel frapp and fajitas and sushi and carl's junior and A&W rootbeer and that super ohsem nasi ayam bakar that Mashi has been taking us to... ish someone - anybody! - come visit me already before the crazy post syndrome starts kicking in!


until i find something else to ramble about... toodles!
from my rose garden, E`n1x at 3:53 AM No comments:

hello!
i officially have a fourth kitteh. one more and i can create my own little futsal team. haha.
Auntie Enn, i appoint you to be their coach if that happens.

meet E1. yeap, D no more. i guess it's time to break tradition. 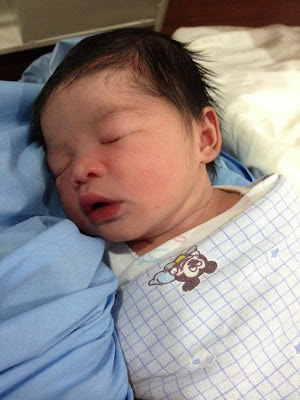 everyone, say hello to the new addition: Emma Mxxxxx.
as always, we're still deciding on a name for her. it gets tougher to decide when you have four consecutive girls in a row hahahahahah.
different letter, therefore more options to choose from =D

she came with very little warning - unfortunately due to the long holiday weekend  for the first time ever my usual Doctor wasn't around to deliver her, and the Doctor on-call arrived a bit too late =P.
from my rose garden, E`n1x at 8:05 PM No comments: