meet Princess Sparkle. i call her Sparky for short.


her hobbies include eating, pooping, stretching,
and climbing onto dangerous ledges and showing off that she's able to do so
while we humans if attempting to do so might result in us toppling over onto the ground below.


just wanted to show off this fluffy furball that is not mine.
so chomey!!!! tail macam feather duster! gerammmmmmmm.


now these, however, are my cats:


they drive me up the wall but i love them to bits!

happy Wednesday everyone! everyone in the house seems to be coming down with the flu =(
from my rose garden, E`n1x at 5:37 PM No comments:

so he finally got his confirmation, and he's flying off at three in the freaking morning.


his flight duration is 23 hours, with two transits in between. mau tak mengamuk orang tua tu hahahhahahahhaha. his fellow comrade going with him happens to know my uncle Pak Long, what a small world. don't ask me how many times he packed and repacked his bags, if he had the option to bring the contents of the house with him, he would have.


since it was past midnight that we left for the airport, the kids bid their goodbyes well before bedtime. i don't think they even know where Daddy was going. Dayana was like, "where's Cherry Barbie??".

his friends were awesome enough to come down the airport to send him off. all fellow pilots, they are. i pray they'll take to the skies soon.


i found this photo in my inbox one day later...


ain't look nothing like a training center. a change of plan it seems..? (bak kata Hidayat).
HAHA.

and judging from the following photo, you'd think that there was nothing to eat over there.

would you believe cili padi pun ado? rotfl.
from my rose garden, E`n1x at 4:30 AM No comments:

remember that little photo shoot i attended at my friend Adrin's house a couple of months (or many months... i forgot haha) ago for her little book project?

a few days ago my friend Shasha texted me... apparently she came across the book at MPH Nu Sentral. she 'saw the cover, flipped inside and saw me' was her words. haha. she even sent me a photo. lol.


i haven't seen the book in real life yet... i went downstairs and asked MPH to look up the book for me... but they came up with zilch results T_T.
(either they got the title wrong or they were too lazy to look it up proper for me... oh well)


anyway, the book's out, titled Babywearing Made Simple, available at (most if not all, apparently) MPH bookstores. or you could get it online at a 15% discount. Adrin will be having a book launch soon for those who'd like to have their book signed - i know i want my copy signed by her =D.

perfect book for those who'd like to dip their toes into the waters of babywearing. nobody could've describe things better like Adrin can. that's her on the book cover, btw. except that now she sports a head full of blonde. lol.

who doesn't recognize this old guy?

Mrs Doubtfire.
Jumanji.
the voice of Genie.
Flubber.
Night At the Museum.

he will be greatly missed.

one for the team

big boss came down all the way from the States.
naturally, we had to take a group photo.
the theme: RED.
unfortunately one or two of them are color blind hahahahh
ok i kid. some didn't get the memo.
(except for that one person that insisted that pink is red =P) 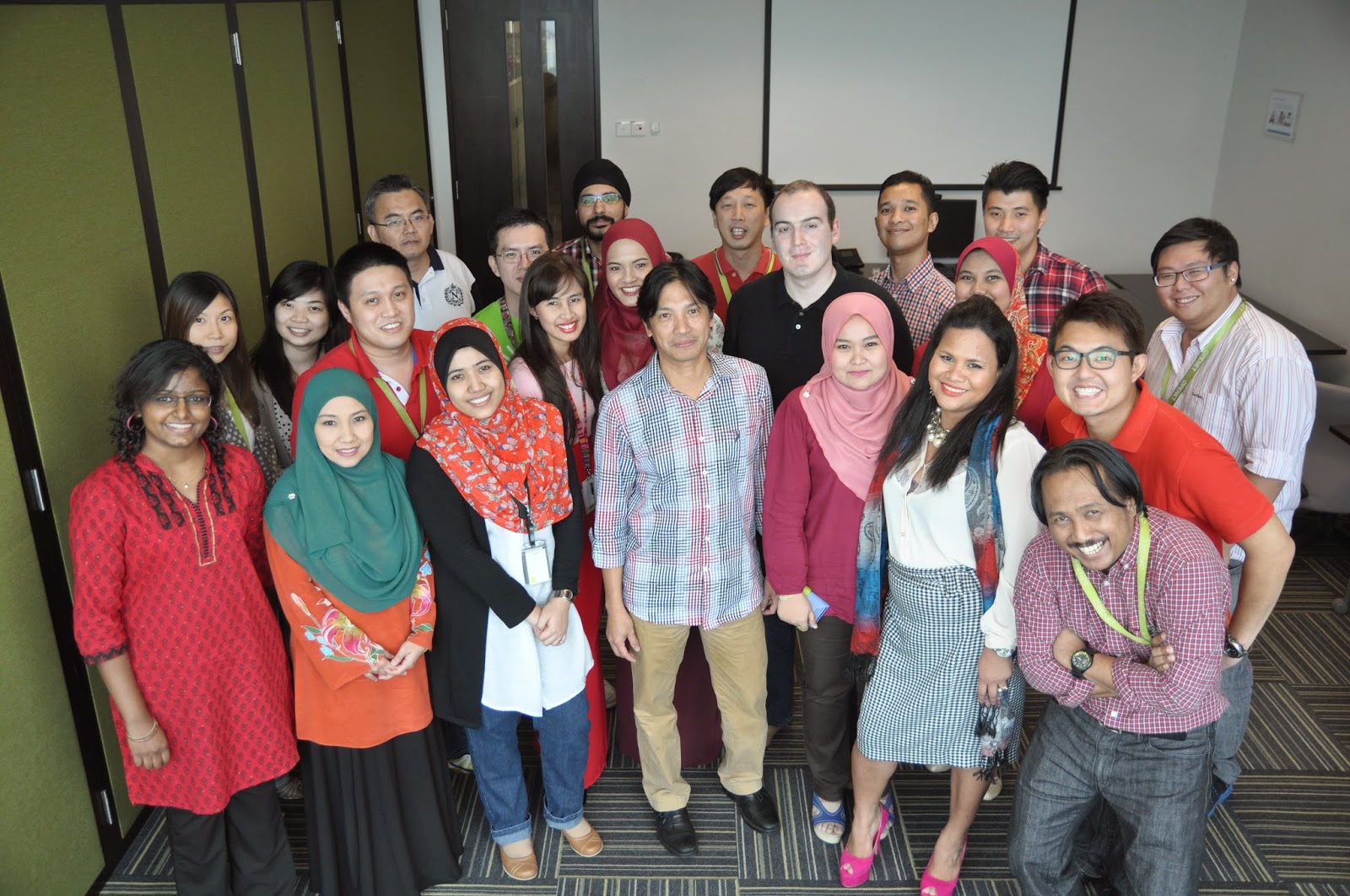 anyhoo,
if you notice the team has expanded.
(i've lost count)
am not really sure if this is a permanent thing yet.
but in the meantime, we work with what we have.
because there's so many things to complete.

So is leaving! *sobs*

happy Wednesday everyone =)
from my rose garden, E`n1x at 5:21 PM No comments:

i was given the opportunity to try more zatgebos of a different kind: twill, and plain weave EC.
(thanks hani n ciayin) 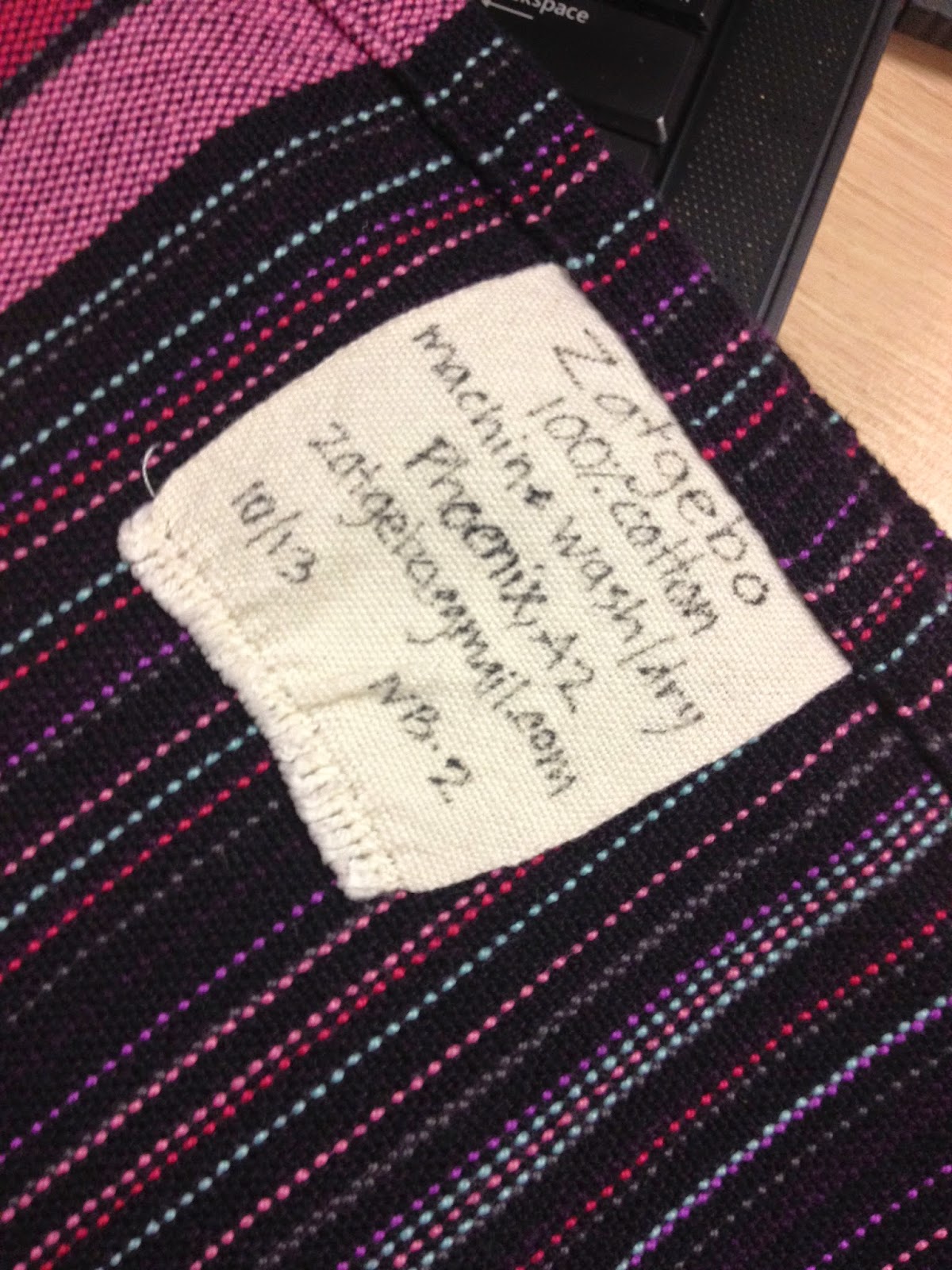 i didn't take a photo of the middle marker, but it's a weaved in thicker thread like my Reflections.

this has got to be my most favorite colored wrap, because of the pink n purple LOL.
aaand despite me hating dark colored wraps.
it's ridiculously soft too!
too bad the lengths about 3.55m. i can barely eek out an FWCC. 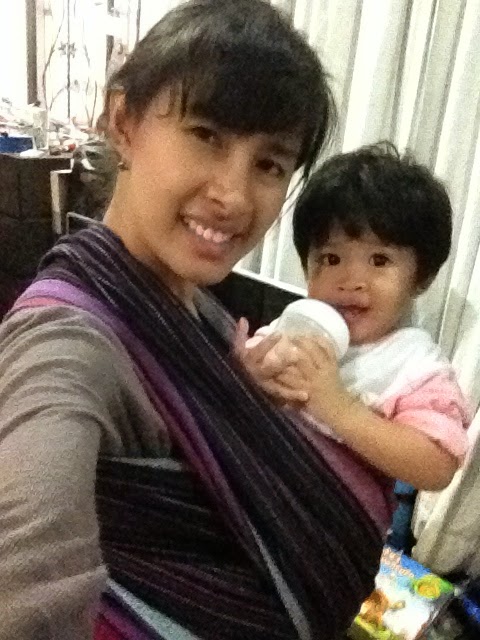 1. i find Aneto to be very dense, i think my arms ached just trying to wrap with it (bahahahah). i think a ruck length would suit me better. i find twills differ from one wrap to another, so i can't simply assume that twill is thick.

2. love the Nebula colors, but it's abit too soft for my liking to use with my 8kg+ kiddo. i think i would prefer my Reflections better. Nebula would make a very good squishie wrap!

maybe i'll iso a plain weave one day. i've still got a few scratches to itch in the meantime.
=)
from my rose garden, E`n1x at 4:58 PM No comments: