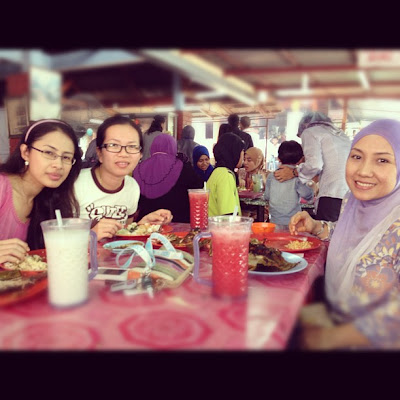 epal susu. nostalgic.
since this was the last day on a weekday to stuff our faces during lunch hour before Ramadhan, me and my two peeps decided to buat keje gila and go for ikan bakar at Bellamy.

i used to hear my colleagues say when i first joined the co. it took them 1.5years for them to realize that invitation. AHAHAH.

"P1 WIMAX la bengong", was her reply (ok she originally said 'sayang' in her msg, i re-edited to bengong for a touch of idiocy on our end AHAHAHAHHA).

ikan bakar @ Bellamy be closed for the duration of Ramadhan, but i read one of the notices on the wall informing that they'll be opening a stall at a Ramadhan Baazar in Sg. Penchala? aiya didn't read properly.