yesterday i accompanied my colleague to go DSLR hunting. her sister wanted to get a Nikon, so we walked around to survey the price.

i went to show her the shoes i kinda liked the day before, slingbacks with a nice rosette in front.
she said no, don't buy (another colleague of mine reasoned it was better to buy tops than shoes =P my WA friend said yes, since i wasn't gonna buy myself a raya outfit this year, so why not shoes? LOL).
then i changed my mind because i saw this: 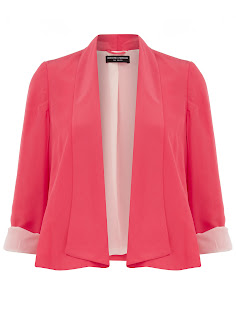 anyway, i told her i know nuts about Nikon; Significant Other was a big Canon fan. according to my colleague (which she probably Googled):

[7/17/2012 2:58:55 PM] N***l H**a: For some reason, people don’t argue loudly about HP vs. Dell or Audi vs. BMW, but when it comes to Canon vs. Nikon, people will defend their favorite brand to the death; if some poor soul dares to suggest another brand, like Sony or Pentax, murder ensures.

she ended up getting this, complete with an upgraded CF card and UV filter (haha): 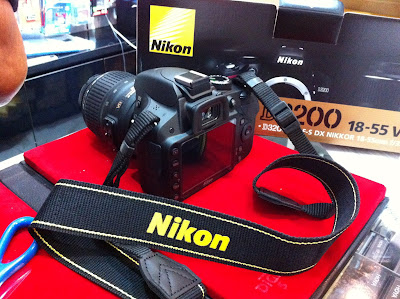 i didn't know what to do so i busied myself by eying this: 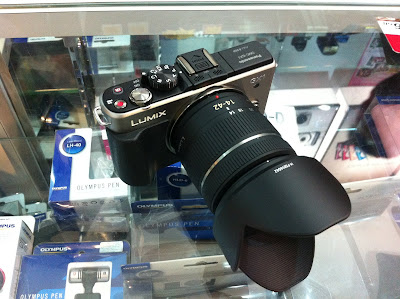 my colleague wanted that flower thingy on the lens. ape ntah nama dia
remember i was busy gushing over how i wanted the one of those Olympus PEN series? in the meatime, Significant Other donated his 400D to me. and he told me to go survey the Panasonic Lumix series, whether was it equally just as good?
i had no idea, i only know my friend Syud had a Lumix and it took great night outdoor photos, we didn't look shiny and orange-y in them (didn't think he was impressed by Olympus. my previous analog was Olympus, i loved it dearly).

here's the first photo taken by the new camera: 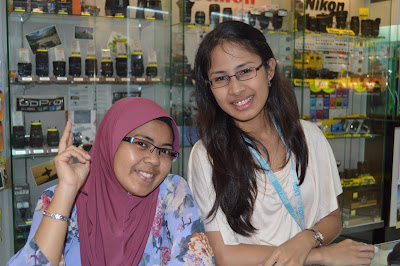 and here's the happy runner customer with the merchandise: 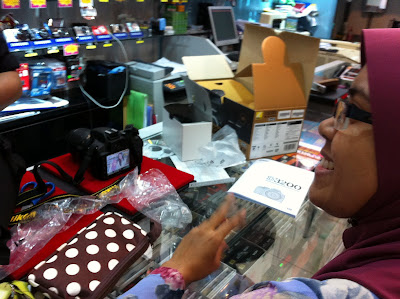 obsessed with peace.
i must stress here that it is really important that you store owners hire chirpy unbiased sales staff. because it really turns people off to want to buy something but hilang selera after encountering:

- staff who looks like they're suffering from PMS and takes it out on their customer
- staff who ignores you because of status
- staff who doesn't even care whether they make a sale out of you or not
- staff who desperately tries to brainwash you to try their products even after you politely say 'no, thank you'.

ok i've encountered these sort of people recently at mv. they really should understand that if you offer the best customer service, even i'd end up buying that horrible looking statue that nobody wants in your store.
and i didn't have any intention to buy anything in the first place!
from my rose garden, E`n1x at 11:04 AM