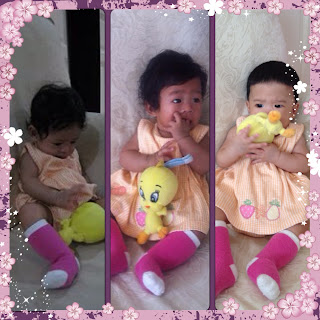 d1, d2, d3. who's who? LOL.
same outfit, same pair of socks, same tweety bird.
same chair even.
but oddly enough, the above photos were taken when
d1 was 5mo+, d2 was 4mo+, d3 was 3mo+.
either i produced slightly bigger babies as time went by or that outfit shrank.
carbon copies of each other, says many.
chomels tak? =D
d3 would have as much hair as the other two if i didn't decide to shave her hair off at 1mo+.
oh today we had potluck at the office. unlike last year, this year my baked macaroni tak laku, my dish came back empty by the end of the day, phew. the desserts were superb, i think they were the first ones to disappear. got moist chocolate cake!!! i didn't bring my camera because i wanted to concentrate on eating. bahahahahaha.