ushering in the nabbit

Chinese New Year is coming up. long holidays for the Chinese this time. Federal Territory happens to fall on the same week as CNY, so people are taking long leaves like no tomorrow =D.

it was pretty obvious as to what animal will be the reigning this new year according to the Chinese calendar. take the Empire, for example. 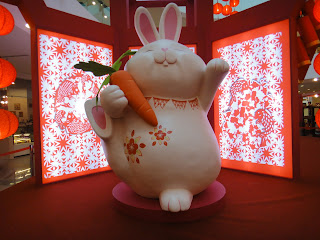 with a mascott that huge, if you still guessed wrongly i would just have to shoot you dead =P 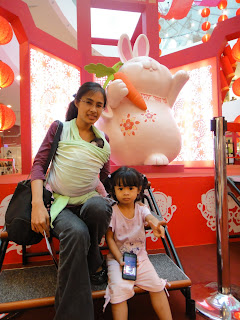 a photo with the carrot-yielding critter
it was pretty obvious that Dayana totally amazed at the sight of a rabbit in real life; the only animal she's familiar with is 'Nasty'. lol. it was by chance that we were there during the hour when the petting farm was open, Dayana got to see the rabbits up close and personal, haha. 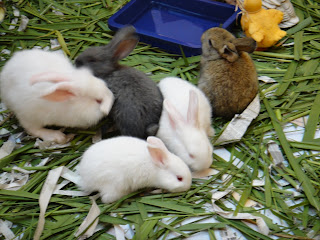 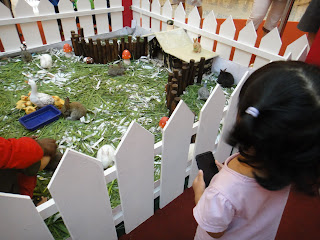 looking in awe
only kids aged 4-12 years were allowed into the petting farm, which didn't really bother Dayana much. she was intrigued alright, but not to the extent of allowing herself to be cooped up together with the rabbits. i think there were almost 20 of them in there? and they were of the really tiny cute ones, not the old grandpa-like looking ones you see at Bukit Tinggi.

we stayed until petting hour was up, then it was time for the rabbits to go home. Dayana refused to budge until every last single rabbit was caged up and brought away. one of the caretakers saw Dayana perched at the edge of the white fence so he took a rabbit out and allowed Dayana to pet it.

like i said, she was intrigued, but not THAT intrigued. but she did manage to pet it after a little coaxing. 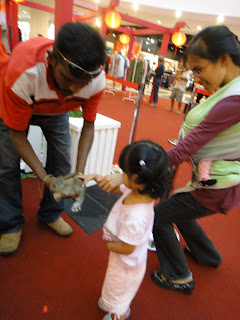 hmmm... feels like Nasty
and what was the LO doing? snoozing away. hoho.

so it got me to thinking, what was last year's animal?

Dayana was born in the year of the Rat, which probably explains why she always gets eksaited whenever Mickey Mouse Clubhouse is on the telly.

Dinara was born last year, and that makes her a full fledged Tiger. cool or what? =D. she shares the same year with her Atuk and her Angah. hehehe.

long holidays coming up... should a day trip to Bukit Tinggi be in order? LOL
from my rose garden, E`n1x at 4:41 PM