ramblings from the mouth of Dayana

while reading her handy manny book:

lol, even she knows better than me. hahaha.

it gets frustrating when she wants something but i don't know what. like the other day she was asking me for something that sounded like 'eko'.

her Atuk storied that the other day at my parent's place she wanted to ask my mom for milk... but her Tok Ami was busy in the kitchen, she got so frustrated for being ignored that she plainly asked my mom, 'Boleh takkkkkk, susu?'. hahaha.

she sudah pandai say 'No'. chis. and the more we tell her not to, the more she'll do it just to irritate me.

yesterday i was busy on the PC (as usual) when i overheard Dayana mumbling behind me on the floor. so i decided to stop what i was doing and focused on what she was doing. Dayana was on the floor sitting smack in the middle her Aqua Doodle and was naming each of the pictures that represented the alphabet as best as she could.

lol, i didn't even know she could do that.

i was surprised she could name some of the other pictures too. oh here's another one i wanted to laugh at.

me: (pointing to the rain) ini apa?
Dayana: sim-pool.

me: (pointing to the zebra) ini apa?
Dayana: itu zee-ba!

and then we spent the night dancing to 'sorry sorry' by that korean group and 'nobody' by the wondergirls that Daddy played on youtube. despite all that, Dayana still slept late. haiz.

she's growing up reallll fast. in the following photo these two looks pretty much the same. i remember me not looking anything alike compared to my second sister. so of course they're sisters, they're supposed to share a bit of resemblance, right? =) 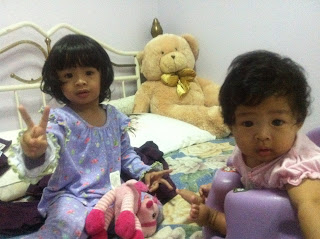 before bedtime
oh and another thing, Dayana likes to address herself as 'meh'. like,

i dunno where she got this. my mom addresses herself as 'mek'. but then Dayana hasn't been around her grandparents for awhile. so mana blaja...? hmmm.
from my rose garden, E`n1x at 4:16 PM