what's up with June

i guess you could say i'm 27 weeks pregnant now (according to the ticker la. i've lost count these days). i'm back to the babywearing sickness phase, where i now feel like selling off all my wraps and my mei tais. haha.

oh oh i got myself into the customs list! i was over the moon about this because i never seem to have any luck when it comes to first come first serve. it didn't help that my internet connection got disrupted a few minutes after the custom list opened. i am so happy to actually be in the list, although i barely made it (other M'sian mamas had better luck than i did) but still, i find it a plus to be at the back of the list coz i don't need to rush in deciding right away how i'd like mine to be. heehee. and i get to recover my funds first =P. i'm seriously contemplating using mandarin as leverage for later.

work-wise... i'm slowly adapting to the environment a bit better compared to the first few months i was here. probably due to reporting to a new boss (who kinda resembles ming na wen) who seems so much more understanding in a whole lot of ways, or probably i've passed the so-called transition process and am finally 'adjusting', but i'm not totally out of the woods yet. i'm still not sure what i see myself to be doing long term, but i have to agree i've learnt alot more here than i ever would if i were to stay loyal to my former company. i can't entirely blame what i feel about work right now on my pregnancy situation, but i remember i used to have the same feeling last time - a total disconnection. bahh.

i haven't been keeping up with updates on Dayana these days. i guess i'm going to regret this at some point in my life.

in another 3 months Dayana will be 2 years old. Daddy is exposing her to doses of Sesame Street daily. Daddy wants her to grow up to be a smart girl, so we plan to send her to school once she turns two years old. she picks up Malay words faster than she does English words. it gets harder and harder for me to figure out what she wants sometimes, which makes it frustrating for the both of us, haha. some words she pronounces in her own way:
- flower : fai
- frog : flossie
- keropok : pokok
- aikim : ice cream, chocolate bar also she calls it 'aikim'
- air uncle : any colored drink i.e. orange juice, sirap... tsk
- akut bike : the first word means 'scared', but i have no idea what 'bike' means. she's trying to tell me she's afraid of something but i have no idea what -.-

sometimes she has a tough time making up her mind on whether she wants milk or water before she goes to sleep at night. when you give her milk, she'll say 'air' but when you give her air, she'll say 'susu'. tsk. she usually sleeps in the adjacent room that's connected to ours. but in the middle of the night if she wakes up she'll come all the way to find me to ask for susu, and she'll drag her Chewy along (her main pre-requisite to get her to fall alseep every night).

she is still loving her Spongebob. the other day at Najua's daughter's party when giving out party favors, my daughter chose the yellow Spongebob bag over the pink Barbie bag. hahaha. we bought her a Barney bag recently at Toys R Us for her, and she loves that too. she'd sling one of the straps around her neck and parade around the room with it. she calls it 'mani'. she had sooo much fun in Toys R Us at the Empire the other day, i guess it's like to Toy Heaven to her. everything also she wanted to grab off the shelves and haul it around the store. rambang mata tengok lego, thomas, mickey, the toy bikes and goodness knows what else. she found an abandoned toy stroller in one of the aisles and started pushing it about. hehehe. a good way to keep her distracted while Daddy went off to see if he could find anything for his Transformers collection. 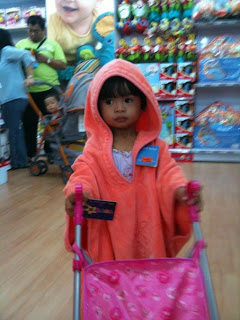 my little shopper hard at work lol
when i'm busy cutting my nails or if i'm in the midst of putting on some lotion, she'll come up to me and offer her leg, saying 'kaki' or 'kuku' or 'minyak' depending on whatever it is that i'm doing. apparently she also wants in on the fun of putting lotion on her leg or cut her toenails. lol. when she's over at my mom's she loves to bully her two aunts Angah and Ashu. she'll force Angah to get her down on her knees to the same eye level as her, and sometimes even asks Angah to carry her (mana Angah larat! hahaha). she loves eating out of Angah's bowl. she still pick fights with Rusty over the green rocking chair. sungguh tak reti nak share ini budak. tsk. and when my mom's in the kitchen preparing food, she'll go and steal a couple of my mom's pots and pans and say 'asak' (she also want to masak lah) and she prefers to play with real utensils as opposed to her toy set. chee~.

when her diaper is full, she'll come to me and say 'mami yak'. when she poops also she does the same thing. but she doesn't show me any indication before she passes motion. so i'm not sure if i should start potty training her now, or if i should wait a bit until she turns two (it's more of a matter of mommy-is-malas-to-potty-train-her hahahah).

football season is coming up. we got Astro to come by to install Astro Beyond (after i had to call them up practically every day because they never delivered as promised within the specified time frame). and for the past few weeks we kept getting disruptions in our channel services, despite the day being sunny! (it's like we're paying for nothing, grrr). hopefully with the installation of the new dish the services will resume to normal. Dayana hasn't had her dose of Cartoon Network, Playhouse Disney and Nickelodeon for quite some time already. haha.

it's raining outside and i'm really sleepy now. i was so hoping for iPhone 3G to land in June but apparently it got postponed to July pulak. tsk. at this rate iPhone 4G will come out first and 3G will merely be considered as a way to get rid of the old stock. haha.
from my rose garden, E`n1x at 2:59 PM