i borrowed Syaz's DIY wrap to try a couple of weeks ago. despite the 'guni'ish color =P, the material was thin and really easy to work with. the wrap was a bit too long for my liking though. meleret2 the straps, lol. anyway i've only managed to try it out once, in my room =P. plan to return it sometime this week. 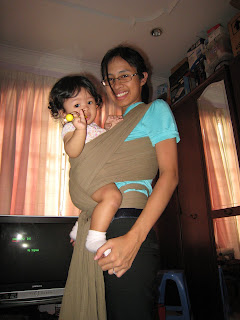 my first try at wrapping
after sending Significant Other to KLIA last night (destination: Norway), i dropped by the parent's place to pick up the OMT. the OMT IRL is really... purplish! haha (sometimes i wish i had taken holunder waves though. but nevermind. the purple is still unique... and i can now offically cross out purple for my future carriers, hee~). didymos violet waves is... thick, in my opinion. i think it would still be okay if worn in air-conditioned places. i feel that my storch is slightly thinner than the didy. probably because the didy needs more breaking into? the body straps were really wide and long 80" (i didn't want to take the chance of the straps being too short, rugi only). the body panel 16x18" and hood were double layered, and the waist straps 60" were padded. my mom says the way she designed the hood is genius. 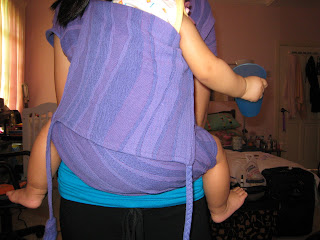 violet waves OMT
i just don't know how anyone can tie up an OMT all by herself, in record time too. the first time i tried it on my mom helped me with the straps. it didn't help that Dayana got all fidgety too =P. after tying it all up, i found that i actually like the feel of the OMT. probably because it's a two shouldered carrier? Dayana might need some getting used to it though. dunno what Significant Other would say about this, he might blow a fuse =P~~~ his snugli is currently being ignored. even our stroller shows signs of rust. omg. can chlorine make things go rusty? just wondering.

had considered a Kozy carrier on FSOT before this. didn't buy because i wanted to read people's reviews first. and also due to the fact that Kozys also deal with straps (more strappys? pengsan). i'm starting to think that an SSC with buckles would be a bit more practical. thinking of venturing into SSC in the later future when Dayana gets too heavy to be carried in my bare arms =D. the other day i ran quick errands with Dayana without my RS and i had arm cramps for the whole day. hahaha. carriers are a real lifesaver!

last night i had a dream that i missed my flight to... somewhere. i got lost on the way to the airport and i vaguely remember someone trying to delay me from catching my flight on time. weird.
from my rose garden, E`n1x at 2:53 PM

aritha: ha ah, sungguh pening! tp siyes u, it beats having to carry ur bb with ur bare hands (unless u mau bina muscle =D). the kain yg i kirim to ur address is for that purpose =P.

joely: depends. the longer the wrap, the more types of carry u can do. tp the one i used is 5m+ kot, too long for small ppl like us =P. IMO i think about 4m ok la kot... u planning to wear ur bb-2b?

=P i already got a couple of RS already! tp since it's one shouldered, lama2 sakit bahu once ur bb gets heavier...
when u come back to Malaysia come n join the gatherings here lah, esp since u got a bb on the way =D
i recommend Syaz's RS, hihi

cuppycakemommy: are u talking about pouches? after i tried an RS, pouches were never the same for me =P. i saje nk try out other carriers apart from pouches and RS =). mmg songeng abit la nk lilit2, tp interesting jugak nk wear...

hoh, u have no idea how hard it is to do this by yourself. by that time my dot dah lost patience in me. hahahahaha!

Do you still have the purple waves wrap conversion? I'd love to buy it, if so.

sorry dear that conversion is now living with my cousin =)