i know this is a bit outdated, but last friday i stayed up and watched Confessions Of A Shopaholic. i went to the DVD store to exchange my faulty PS I Love You DVD but they didn't have another one in stock so they replaced it with the Confessions movie instead.

i didn't manage to catch the movie in the cinemas the last time it was being shown here. and i heard people giving reviews on how it didn't really do justice to the original book, that the book version was better than the movie, and that hugh dancy was a real heartthrob.

i've heard of isla fisher before in those magazines i used to buy when i was in my teens (back when jonathan taylor thomas was an adorable heartthrob =P), but i wasn't a big fan of her then. she reminds me alot of alicia silverstone in Clueless.

with hugh dancy being british i didn't really think he'd be the handsome type. besides i 've never even heard of him before. but by the time i finished watching the movie i was already swooning over him. hahaha. the last guy i remember going gaga over together with my good friend aida back in high school was jonathan brandis, that was a long time ago and he's dead. 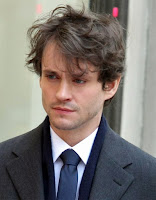 hugh dancy as luke brandon
anyway, i googled hugh dancy to find images of him but after going through the images i prefer how he looks in the Confessions movie than anywhere else. i guess i kinda like the character that he was portraying in the movie. who wouldn't love to have their life be something like that out of a movie: you being a total ditzy shopaholic airhead with your head in a cloud and going broke in the process, then end up with one of the most handsome and successful guys around? =D~~ sigh. i wish!

my version of a fairytale ending =D
i know the movie is adapted from Sophie Kinsella's Shopaholic series, but to me the movie is kind of like its own movie, separated from the book series. the movie plot is totally different from the book version. and in the movie the Denny & George scarf doesn't really blow me away as the scarf did in the books. i imagined it to be more dazzling and amazing-er, you know? but becky's friend suze, played by krysten ritter (another person i've never heard of) is EXACTLY as how i pictured her in the book =D. 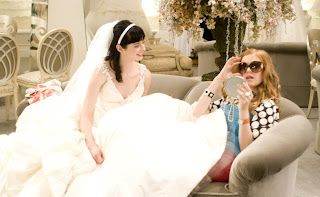 you're lucky if you have a friend like suze
hugh dancy's dating claire danes by the way. did you know? =D
from my rose garden, E`n1x at 11:44 AM

i pun minat this guy punye character in the movie.. huhu.. sampai mengigau wanted this guy to appear in my life.. haha.. i wish! and the movie is not fair at all.. how come the green lady can be so lucky... senang je nak dapt that rich guy... hohoho... tipu! tipu!

oh me too *shiny eyes*.
lagi2 when she managed to repay off all her debt by having that jumble sale... haha.
org malaysia ni tak main arr second hand... =P~~~