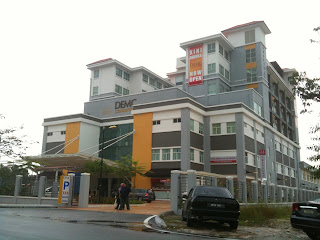 the new DEMC building
i dragged Significant Other to antenatal class last Sunday =P. ok so i'm a second timer so you're surely asking, buat apa mau pigi??? well i missed registering for class the first time because the slots were full, so i was determined to go for class this time round, despite already going through pregnancy and delivery =D. DEMC antenatal rates were quite reasonable for a 1-day course compared to others (some classes spanned into different sessions on different days and didn't provide meals even =P. but probably the classes were more extensive, hence the price difference?).

the night before we went for a movie marathon at GSC Midvalley - 'The Sorcerer's Apprentice' and 'Inception'. was really irritated with the ticketing kiosk there - there were two kiosks but it seemed that neither one was functioning. had to waste time queueing up to collect tickets at the Gold Class counter (which defeats the purpose of purchasing tickets online = wasting my time queueing!) that i missed the first 10 minutes of my movie =(. and i thought TGV's ticketing system was bad. i guess the only branch i don't have issues with is GSC One Utama (but then again, i haven't watched movies at One Utama for quite a while, so i beg to differ).

hmmm, since i'm already hyped up on the subject, i might as well add that i paling benci when people queue up at the GOld Class/ticket collection counter (which is supposed to be strictly for ticket collection, he-loo) but then i notice they end up spending a long time at the counter choosing their seats lah, contemplating this lah, that lah, as if they baru mau purchase tickets for the first time. i mean, tolong lah. it's really irritating ok, the purpose of the line is to PICK UP tickets. what's the point of me purchasing online if i still have to wait aeons just to pick up my tickets??? grrrr.

'Inception' is not bad a movie. you need to churn your brain cells a bit, but definitely a must-watch.

ergh, i'm off topic already. i'm supposed to tell you about my antenatal class, haha. so anyway, after the movie marathon we reached home at almost 3.30am and had only maanged to get a couple of hours of sleep before we had to get ready for the class which started at 8.30am. i was sooo happy Significant Other agreed to accompany me that day. DEMC is no longer at Section 9, they relocated to Section 14, but still very near to the house so i don't have to worry about getting stuck in traffic on the way to the hospital if i ever were to suddenly go into labor =P.

i think there were about 26 couples registered for the class? a pair of them were even Doctors. mostly were first timers, but they all seemed to be so much older than me. i decided to stay low profile when the presenter asked if it was our first time being pregnant or not, lol. breakfast, tea breaks and lunch were provided.

the antenatal class was divided into sections (in my own words):
- healthy eating during pregnancy
- the delivery process
- pain relief during labor
- newborn care
- successful breastfeeding
- relaxation techniques during labor and exercises

after taking the class, i think i feel that i was much better off not knowing what to expect. hahahahahaha. i didn't know that there were soo many types of complications that could happen during delivery. i wasn't offered any pain relief option during my first delivery save for the gas which to me didn't feel as if there were any difference haha. epidural seemed much to complicated for my liking either. most of the topics that were presented i already knew, save for the last topic which i hope is gonna be useful when i go into labor later. i already knew which topic Significant Other would be most interested in, funny how they conveniently slotted that topic right after lunch =P.

they even gave us a tour of the labour room and wards, something i was also looking forward to. me and Significant Other were interested in getting a single room with ample space for visitors and family to sit comfortably in after i deliver (although i doubt i'd get many visitors this time, since confirm it'll be fasting month by that time). my previous room at the old DEMC building was soo cramped it had only 2 chairs for the guest so the rest had to stand, sungguh tak hospitable langsung haha. as with new hospital comes new rates - the single room is now priced at rm185 per night as compared to the old rate of rm150, huhu. they even had other more expensive rooms as well, ranging from rm400 to rm600 to rm1k+... some included rooms furnished to a theme i.e. japanese, english :O i was like, wow, kalah hotel! heck i don't think i'll even have time to appreciate my surroundings, i'd be too busy recuperating from the exhausting birthing process to be even enjoying the room in the first place, haha.

the wards were rather quiet that day, not much people running about. perhaps it's a sunday? (musykil i haha).

after lunch we were given a quick quiz just to see how well our spouse knew us. obviously we failed, Significant Other got my primary school wrong, as well as some other measurements like my height and waist size, lol (by 1cm each! chis). there was one question asking what the wife's hobby was, the presenter mentioned that most of the husbands answered 'sleeping', ahhahahahahah. but you know what? i won one of the lucky draw prizes. wauwee...! ME, who has never even been lucky in any form of lucky draw, won something that day =D. first time! yay! yay! *syiok sendiri*. 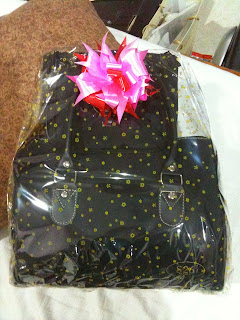 my first lucky draw ever!!! even if it isn't much, but still =D
well, that's about it. now if only i can remember the breathing and excercise techniques they taught me in class that day. i predict that during labor time, everything that i learnt and remember would simply fly out the window, hahahahaha.

that night after the class i finally got around to preparing my hospital bag, lix kept saikoing me that it'll be any day now despite having a month+ to go to me EDD (she delivered at 34 weeks, huhu). i'll be entering 35 weeks and i still feel like i'm not prepared to deliver. i wonder how i did it last time. i don't think i even rememeber my last month before i deliver. this time around, i am often tired and get rib ache + back ache, and have successfully managed to lose my appetite.