x2s in the house

i was supposed to take tons of photos before bringing them down to the gathering last Saturday. instead i brought the box unopened, along with a tons of my other wraps. and i had the box since Wednesday @_@. i was too busy to even open the box last week! haiz. 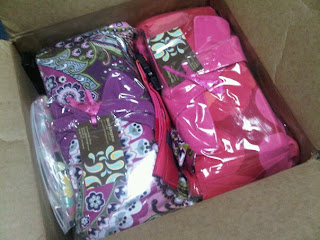 looky what we got heeere
anyway, they've finally arrived. and i scored the slot in May last year, pergghhh it's been that long for my own custom! what a long wait! and i was #42 on the list! @_@. i guess it was a blessing in disguise, because right before my turn was up, Kirsten came up with the X2, a newly improved version of the original X. super! and i was originally going with the J and had contemplated a headrest too. i hate hoods. i rarely use them. tried it with Dayana once, she started panicking right after she woke up because being in it obstructed her view lol.

the best thing was, my parcel was stuck at customs because the declared value was too high T_T. but good thing i had a friend who helped me settle the problem *phew*. do you know how much i'd have to pay to get it released? almost 30% of the declared value *pingsan*.

was supposed to surprise Lix, but i was too burnt out at work @_@. i suppose she was pissed off at one point, she kept pmming me about when i was going to take the Kangas, and i kept leaving the office wayyy past normal working hours lol. oops. my postman was supposed to join the gathering that Saturday, but had a last minute issue, so she couldn't make it =(. it was nice to meet her that day, even though for a while and even if it was at the gas station, lol. we (me and Lix) owe her lunch for all the help she did (using the power of heels and kenyit2 mata according to her hahaha =P).

i've wanted a Kanga since forever. the ones that were on fsot were lovely, but they were all in standard sizing, which wouldn't be a great fit for thin ppl like me. then i got irritated abit because people all around me started getting theirs left right and centre (with me still waiting for my turn like no tomoro T_T sungguh frustrating). i actually bought the fabric sometime last July to save the trouble of going through thousands of fabric only to choose ONE. i also wanted to go with blood red straps, but apparently it didn't go with the fabric. so i ended up choosing hot pink, and that was what made me decide to sell my Monkey XT due to its similar colors (bye bye monkey, it should be arriving in Dublin i expect).

which equaled up to a bomb, or hand grenade. ahahahaha.

i opted not to customize a hood, even though it was tempting to do so, i deduced that i wouldn't be using it (if i did custom one i would've wanted one side to be full fabric and the other side to have another applique which would definitely cost a bomb haha).

Lix customized the same thing save the bedford cord. she chose amethsyt for her straps, and with XT side extensions to cater for future kid expansion. i think hers turned out lovely. although in photos, amethyst actually looks much pinker. Kirsten had suggested boysenberry but i think Lix gut magic worked even better. kekekeke. 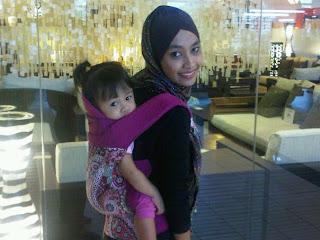 the overexcited enthusiast
mine? i think i get abit red-overdosed each time i stare at it. but i love love love it! =D. definitely a keeper, after such a lOoOoOoOOOOoOong wait.

my friend Adrin wore Dinara in Lix's X2 until she fell asleep, so i guess that's a sign of +veness lol. and i've never worn her in an SSC before. 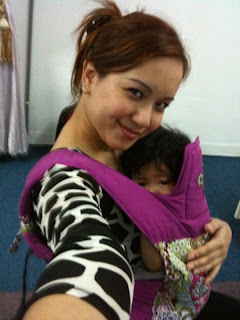 the hot mama with my lovely
btw, Kirsten will be reopening her slot again this February 26th 2011 10:00 am CST. she'll be opening custom slots for the first 50 people who email her at the abovementioned time. here's what you need to do:

-- send an email to bkcustomlist@gmail.com with:

then wait for her to publish the names in the bloo-kangaroo yahoo group to see if you're one of the lucky 50. each person is allowed to custom up to 2 carriers at a time :).

Kirsten does magic, it's soo worth it =).

now, what has Dayana been doing all the while the gathering took place? coloring with her fellow toddlers, Yaya to the extent of eating her crayon and using it as makeup on her face. haha. too bad i didn't have pics =P.

i have never seen so many wrap-crazed enthusiasts cooped up together in such a loooong time. and the stashes! my Gawd, i am officially hooked on DSF and GF. chis. it was too bad i had to rush home earlier for another engagement, i only had time to touch-feel some carriers (i would still kill for an rdbmama grad) and wished i had more time to savor the chicken and fish that was there (haha). met a whole bunch of people from cyberspace for the first time. no thanks to Aja, i am loving her rosanna butterflies LOL.

oh, i wish i had taken pics!

any babywearing mamas interested in joining in on the fun? (so far i never managed to racun my close friends into bbwearing, they'd rather build muscle carrying their kid with their own bare hands hahahah). visit Malaysian Babywearers online to know more about babywearing, get sucked into the current carrier craze (which changes so often like nobody's business) and mainly to gather info and meet other fellow mamas like yourself. i got to know my current close friends through here :).

so now that i'm officially broke due to the dye jobs that i have to fund, i seriously need to go into destash mode. i tried calyx yesterday for the first time and chickened out on selling it. haiz. apa punye turr. at this rate nothing will be leaving, what being the hoarder i am. haha.

maybe i should sell my shoes regardless of the huge loss i'm taking. i'm a size 5. any interest? =D
from my rose garden, E`n1x at 5:54 PM

lol.. where is your action photos la babe??? why is my X2 all over your blog.

hahahah. i don't have any. nanti bile dah ade eksyen pic i will taruk lol!