7D present and for me, a mari

decided to get Significant Other his two-year's worth birthday present (2010 & 2011) last weekend while we were at Pavilion. he initially wanted to get Angry Bird but since there was news that the newer version would be out sometime this year, he resigned to wait. his other option was to buy it anyway and get the newer version for himself later when it gets released later in the year. and the old one? sell it to me lah. hahaha.

i haven't been enabled on iPads yet. i was only enabled by iPhone because of DiGi. so yes, i have DiGi to thank for allowing me to be connected 24/7.

in the end what did we decide to get? a Canon EOS 7D for Significant Other's birthday. i told him he'd better expertise himself by raya this year, else i'd auction off his gadget on ebay.

the one thing we regretted a little was that we didn't realize the place we bought it from had marked up the price by a few hundreds T_T. we were cheated by such an established company, chissss.

now... anyone interested in getting a second hand Canon EOS 400D? =P.

i wore Dinara in a TSF RTIF that day. i find it funny that everytime i babywear, i never seem to bump into any MBW members? lol.

anyway, it would be unfair for only one person to buy. i came home with something too: 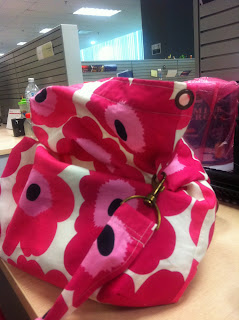 haha. i initially wanted to get red-orange, but Significant Other preferred pink. and it's delightedly growing on me. i like that i'm able to chunk my pumping gear into the bag. i just wish it was more sturdier and had more compartments. i didn't realize i bought it at the same stall my friend Lix had posted about in her FB tho. haha.

i wanted a LeSportSac, but that's currently out of my budget right now.

don't ask me what's so special about Marimekko, because i got no idea. kakakakaka.

oh and just to note down:

same here i plan to sell off my 400D too coz seems like better someone else utilize it than me for now.
rarely have more time taking picture and just using iphone for full use :D.
Hey if anyone interested too for another 400D let me knw.

lol. sure thing! i realize nowadays people can afford to buy firsthand though. eBay isn't the same as it used to be =)

heyy... why dint you get me one of the marimekko bag??? i sooo want one :P