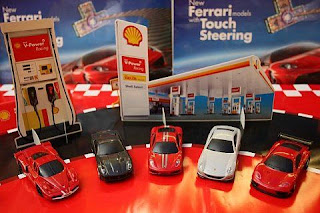 you know the Shell V-Power Racing Ferrari Model cars that Shell Malaysia launches each year in conjunction with the Malaysian Formula One Grand Prix? you can obtain any of these seven model cars at a special price by fuelling up at any Shell station nationwide with a minimum RM40. those who fill up with Shell V-Power Racing can buy the model cars at a special price of RM6.90 each, while filling up with Shell Super, Shell Regular or Shell Diesel will allow you to attain it at RM8.90.

we encountered one of these cars at my cousin's house, i wasn't sure if it was for Nedd's niece, or for my uncle to play with =P. but Dayana got attached to one of the cars, which immediately prompted Significant Other to purchase one one fine day. and so from there on, Significant Other decided to get a set for his own personal collection. he first set out hunting for the Shell V-Power Racing Collector’s Garage 2009, which he finally found at the Damansara NKVE station (with the initial thinking that he could purchase the whole set at RM60, lol).

he started out with one car in his collection (the one that was originally for Dayana is now sitting in his newly-bought garage, lol). he gradually added on another three more models (thanks very much to the super nice gas attendant!), and another trip to the station resulted in him bringing home another two more. 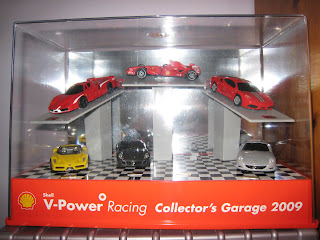 his current collection
the only model he doesn't have yet is the 360 GTC. and i've went to most of the Shell stations along the routes from my place to KL and to my parent's place, and a few others, but happened to be that this particular model has completely sold out =(. does anyone might know where this model is still available at? it's the last one to complete his collection. 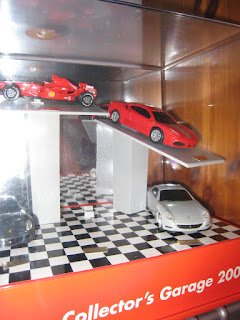 the missing piece
and i just found out that the campaign ends on May 11, so i've less than a week to find it.

updated: thanks a bunch to Jerry Wong (a total stranger i only got to know of through cyberspace), if not for him i wouldn't have been able to complete the collector's set. phew!
from my rose garden, E`n1x at 12:02 PM

macam mama,crazy about the collection.mama pon collect jugak tht car & she got like hell bnyak ohh!