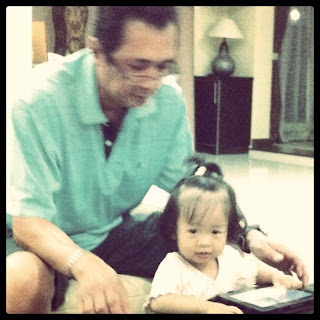 a quick update on her turning One:

- waves goodbye
- has already crawled properly, laju pulak tu
- loves to tag along with her elder sister and pandai cari gaduh
- loves to clap her hands for no apparent reason
- gives you a high-five when you ask for it
- when asked for a kiss, she'll open her mouth and give you one big sloppy wet one <3
- tried teaching her flying kisses, but so far she only managed to get pass the hand-on-mouth, lepas tu, kiss tu tak fly2 pun
- she hates anything on her head, be it tie band, ribbon, hat, if she notices something on her head she'll try her hardest to pull it off
- she still loves to eat, but i notice that she has preferences. if she doesn't like it, she'll spit it all out, and she'll stop when she's full
- her signature word is 'nyum'. she'd happily go 'nyum nyum nyum!'
- says 'ta ta ta ta ta ta' whenever she's playing by herself, eksaited la tu kot
- crusing now. no idea when she plans on walking on her own. my wraps won't have a wrappee to wrap with soon
- has been more open to other people, especially during raya. probably because she sees them more often that before. i dunno how long this will last. but still wary of strange never-seen-before people
- susah benor nak pakaikan diaper. grrrrr~
- still breastfeeding, although not exclusively anymore

mommy loves you, little girl :* (and Dayana too, in case she ever reads this =P)

p/s. worth mentioning, Dayana has become addicted to Alvin & the Chipmunks now T_T
from my rose garden, E`n1x at 1:35 PM