Daisy stayed over for a couple of days last week so i pestered her to teach me how to use makeup. i seemed to have accumulated so many types of cosmetics over the years; some of them half-finished, some of them barely used (because i decided that the color wasn't meant for me), some of them gotten free. and being the true hoarder that i am, i so sayang want to throw them out, even though i think most of them have already reached/exceeded its expiry date. hee~

due to limited storage space, i categorized my makeup into three categories in separate pouches: face, eyes and lips. so the first thing Daisy did was to go through all my makeup: to separate the ones that were old and expired. my eyes were round like saucers as she tossed the to-throw items into a separate pile - dried-out liners, old lip balms and lip colors, makeup packaging ("JANGAN SAYANG-SAYANG", she says. "MAKEUP IS MEANT TO BE USED", she says. LOL). i did sneak a couple of them back into my collection afterwards (eep), a few i gave the maid, and a little i threw away.

next thing was to show her my measly brush collection; the ones by Artistry i received as a wedding present, the rest were randomly bought along the way (Elianto - cheapest option at the time :P).


appalled with my stash, she took me brush-shopping at Pyramid. there was a shop at one wing of the mall that sold quite reasonably-priced no-brand brushes (as opposed to the crazily-priced branded ones). she even helped me label them as well (HAHAHAHA). i was pretty sure that Daisy got A in art class during high school; i was right.

so... my current brush collection! good luck to me in using them, bahahahhahaha. i'm currently loving the powder brush, it's so big and fluffy! goodbye, lousy sponge! kah kah.

there's too many steps in makeup, i actually had to take notes. her first experiment was on my maid, who was so ecstatic with her dolled-up look that she did not wash her face until hours later, HAHAHAHAHAHAH (i actually did that too after my first lesson, which ended in me having a zit currently brewing at my chin, CHIS).

then Daisy taught me how to create a look based on whatever makeup i had in my collection. so much hard work, i tell you. triangles and trees and lines. this shade and that shade, heck i tried swabbing three different foundations on my face and i could barely see the difference. and do you know how hard it is to create the ultimate eyebrow??? summore got two eyebrows, so kene la be identically drawn kan? =P~~~ i almost wished we could just stencil eyebrows instead.


because of her i have a bunch of items on my 'wants' wishlist =D. but i do need a good concealer, i have horrible dark circles that i desperately need to hide. she complained that most of the colors of foundation and concealer that i had in my collection were all too dark for me. i tak puas hati when she said that the husband was fairer than me, chis. he used to be dark-skinned until he 'expanded'. i have this theory that people grow fairer as their skin expand. hahahahahah true or not?? =P~~~~

oh i bought a makeup case to keep everything in! the husband said i could, yay! not the professional kind, that would be too extreme. we went into Inglot and found a box costing rm500+, and i was like T______T. i finally bought the case at the same shop i bought my brushes, they were having a sale and it was only RM95. ok la, i could fit all my stuff into it, and it wasn't too heavy so i could lug it around the house if i had to. aaaaaand it was PINK!

you know how excited the husband gets whenever he brings home a new gadget? well that was the same thing with Daisy and me (well, Daisy mainly hahahha) when we reached home - semangat nak unbox and terus simpan all the makeup inside. LOL


i finally got my Sephora Black card too. guess what i splurged on? 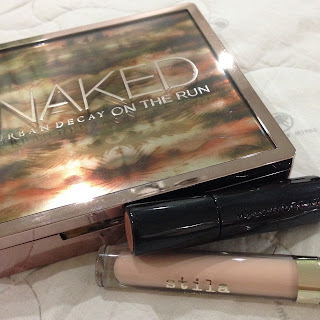 to justify, i was eligible for a 10% discount and Daisy told me that the Naked On The Run palette was suitable for lazy people like me, hahahhahaha ("untuk orang yang malas mekap", in her words T_T). the only downside to it is that it came with no brushes, phooey. i also bought two lippies - awesome Urban Decay Matte Stark Naked which i mix with a bit of Too Faced Melted Velvet for a bit extra color. i actually asked some random woman in the store what lippie color was she wearing on her lips ok -____- haha. that clear Stila tube in the photo is lip primer (i wanted the Too Faced brand but they were sold out).

can you believe Daisy has only two lipsticks for her personal use? T___T. i have wayyy to many to count!

btw, follow my favorite friend Daisy Dee on instagram @weddingfavour_dee; she does makeup, hairdos, and even personal classes. i'm always amazed at her hair masterpieces =D.

ok sekian kisah mekap untuk hari ni. now if only someone could recommend me a skincare product that can make my skin look brighter and more radiant =P
from my rose garden, E`n1x at 4:04 PM