a take on us

so school holidays are here again.

a quick update on the kids: 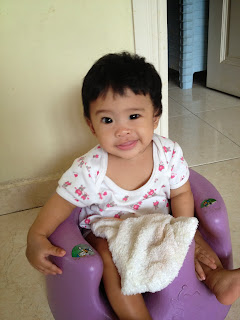 - she's happily taking in her baby cereal but she doesn't take too kindly to other foods, such as the banana. i mean really, who hates bananas??? Dinara ended up eating all the bananas i bought for the baby. belum lagi peas and spinach. kekeke
- bought her apple juice formulated for her age and rejected that as well, she made that trademark face of hers whenever she tries something new and her taste buds doesn't seem to like it.
- she blows raspberries a lot these days, sometimes even when she's about to fall asleep.
- her hair makes everyone think that she's a boy T__T
- got her 6-month old jab last weekend. i think she's quietly holding a grudge against the Dr. and she's not telling me anything.
- fascinated by plastic bags. or anything that makes sounds like plastic does when scrunched. 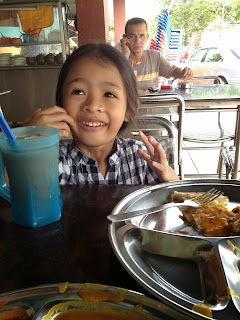 - she's on her school holidays now. fun eh?
- as expected, on her second day of swim class she practically didn't want to get into the water as they were held at the deep end of the pool. she practically strangled the teacher clinging onto his back, haha. she didn't trust the floats the teacher told her to hold onto X_X
- she's progressed to book 4a of Peter & Jane.
- am thinking of enrolling her for mandarin classes perhaps.
- she had her booster as well. she whimpered a bit but she was such a big sport for not kicking up a fuss. she's such a big girl now. 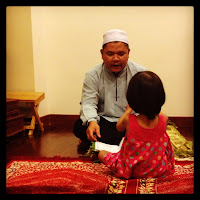 - eats and eats and eats.
- practically cried when i dragged her home after registering her for kindy at Dayana's school. seems she wants to stay because her big sister was there. let's hope the feeling's mutual when she actually starts kindy next year.
- a couple of times a week i send Dayana for mengaji at my friend's house, and Dinara would usually tag along. on good moods she'd mengaji along with her sister if she's in the mood. haha.

have you you heard of MomentCam? you take a photo of yourself and you upload it into any sketch template that you like. for those who doesn't know about this app, they'd go all 'oh wow cantiknya! sapa lukis niiiii???' haha


on another note, anyone interested in a ring sling? 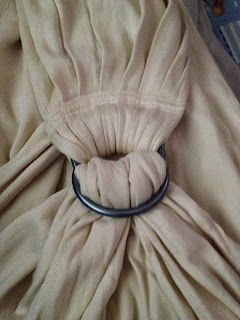 and lampone has finally sold, getting the love it deserves.
i'm left with rosie, my only indio (after my dyed silk and natural linen).
and to think that i used to own so many indios, what me being an indio lover. haha
(trust me, indios are soo worth it).


sekian my rambling for today. i took leave for tomorrow, i need to run errands at the Indonesian Embassy and i really really hope it won't take all day.
from my rose garden, E`n1x at 11:57 AM