my sister's off to India 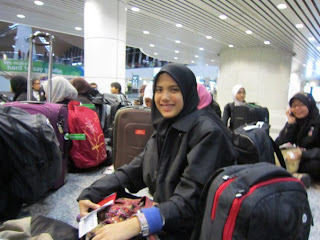 well. it's official. my sister finally left for India yesterday. the last time she flew overseas was to Italy so i guess this must be another big adventure for her (but why...?? nevermind). my C++ lecturer was a native Indian. i remember we used to have a hard time understanding what he was saying - "seeyin, siottt" (HAHA). good luck with understanding their dialects, sistah!

the house is kinda empty now, what with only Kak Ish left to fill in the void. previously Aya would be the official nanny for Dayana to bully, now it's all Kak Ish, the new super bibik. Dayana's having a +ve effect on her too i think. lol. i'm in Bangi at the moment btw, finishing the remainder of my confinement period at home sweet home.

i have no idea what Aya packed to India. baggage limit tends to pose a problem, especially if you wish you could haul your whole bedroom with you. not to mention all the food you wish you could bring with you that doesn't happen to be available at your destination. my sister's bags were already filled to the brim with goodness-knows-what, i found her trying to stuff a bag of cloud 9s into her hand carry. cloud 9 i tell you! cloud 9 takde kat India ke? hahaha. ini baru pergi. belum lagi balik. people end up buying new luggage just to lug back all the extra stuff they've accumulated overseas (yours truly included. on my defence, Significant Other brought back 8 boxes of Transformers collectibles. so how leh?).

i wonder if Dayana would still remember Ashu after 2 years. i know Dinara most definitely wouldn't. lol.

so we went to KLIA yesterday evening to send her off (i pun ikut skali ok =P). i was kinda moved by the way her friends came down just to see her off - her IB friends, even her peeps all the way from Kedah. i think there were about 30-ish MARA scholars that were flying off that night, plus a bunch of JPA scholars. KLIA had never looked this congested the last time i was here (which was er, when i flew to Houston in March?). each student seemed to have their own pasukan sorak present at the airport. they actually had to hold their so-called briefing past the checkpoint just to separate the students from the whole big crowd, haha.

funny thing with those MARA scholars is, it's bad enough that they had to wear boring looking navy blazers for formalitie purposes (probably so that they can distinguish themselves apart easier), they all happened to show up at the airport looking more or less the same - dressed in black bottoms, black tudungs, even their laptop bags were in the shade of red-black (is it a trend that i'm missing, perhaps? O_o). if it weren't for my sister's weird shade of purpley Crocs, i wouldn't even recognize her from the crowd. lol.

and you would've thunk that MARA would have this procedure down pat since they've been sending a whole bunch of students overseas for quite awhile now - apparently not. the students were supposed to be there at 5pm, but i guess everyone arrived late due to last minute notice in change of time, and the whole process seemed a bit kelam kabut in my opinion. ntahla. s'long as they don't miss their flight, eh?

Dayana didn't want Ashu to leave. in fact she was all set in following her Aunt to India. hahaha. even told my dad to pick her up and go down the escalators to Ashu (pandai betul ini budak). Dayana burst into tears when Aya waved goodbye to us after the bag screening checkpoint and was heading towards the gates. Dayana's willing to follow anyone as long as they're going somewhere, tak kisah la sape2 pun, janji she gets to jalan. keke. nampak sangat sudah mati kutu kat rumah. and Dinara's too young to play with her yet. 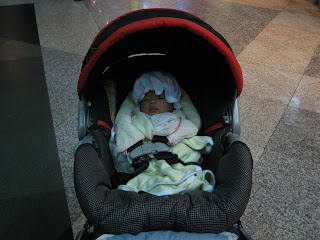 dinara at the airport 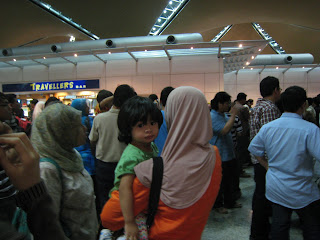 dayana and the overcrowded KLIA
i miss my sister already. lol.

the whole shebang makes me wish i was 18 all over again and back in Uni... (where we didn't have to worry about bills and work and money *bliss). i miss my Uni room. i'd pull the curtains to my window wide open much to my roommate's annoyance. i miss walking to our UFO, the cheap food at the cafes, ogling cute guys (haha), outings to Batu Gajah and KC... those were the days =D.

revisiting KLIA again also brought back nostalgic memories for Significant Other, who wishes he was still travelling. that very same person used to say he hated travelling and wouldn't even think of stepping foot in the States is now a big fan of New York, hahahahah.

oh we officiated our new tandem at KLIA too. Significant Other was excited to try out our new gadget so after assembling it that morning we hauled it into the boot of his car, which took up the whole boot space T_T. now Significant Other is contemplating using this as a reason why we need to upgrade to an MPV. haha. we forsee that whatever the baby does, Dayana wanna do too, so we decided to get a tandem. let's just hope we get to put it to good use. it would defeat the purpose of babywearing though (but at least i'd have a solid reason to destash later hoho). maneuvering the stroller was great, it had great suspension (according to Significant Other), ample room to chuck away the baby bag, only huge compared to a one-seater stroller (duh). 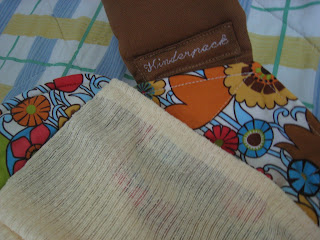 sunflower kah? lets have a 3some photograph wif Lix!!