a bit of paintball, face paint, babywearing and f1

i'm really behind on my post, aren't i? i'm still at the office at this hour, a fuse blew at our house yesterday which blacked out the back section of the house -.-. thinking on the positive side, i'm glad it was a partial blackout and not a total darkness blackout (the lights and fan were out in my bedroom, but the PC and tv were still functioning, beats me how they wired the house @_@). thanks to Faiz, i got someone to come over to fix the problem. yay! alhamdulillah.

so let's recap the past weekend, shall we? (British accent mode :P).

first up, mini babywearing gathering at Tasik Chempaka on Saturday! happened to be the F1 qualifying started at the same time the meet was held, so i decided to take the opportunity to snake away with the kids while Significant Other was occupied! hoho. photos courtesy of Leo and Leen. 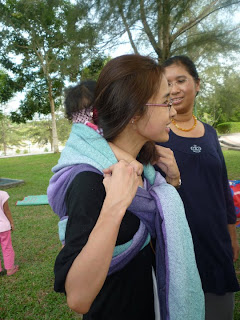 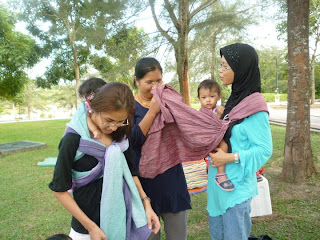 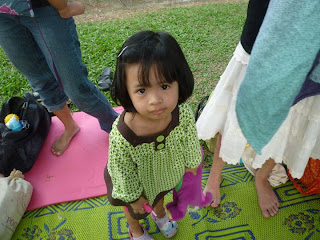 Dayana wants to be worn too :P 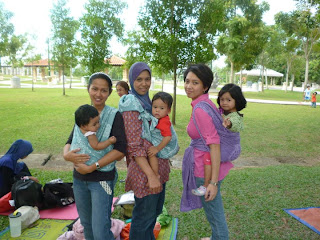 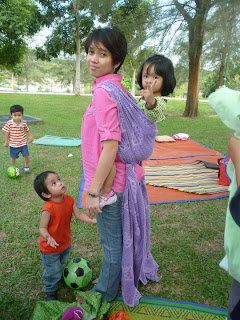 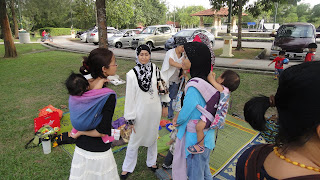 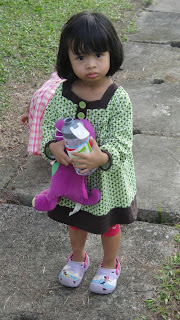 she's loving the new water bottle i got for myself... lol 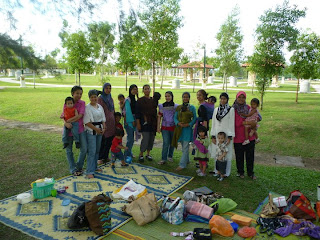 babywearing group photo shot
i went for my first Paintball event on Sunday. Significant Other's department organized it at TT Sports Park, which is apparently the biggest paintball park in Malaysia? (yakah? i dunno i simply read the words written there hoho). i think many were expected to turn up but in the end there were only 11 of us. and about 4000 bullets to finish. uh oh.

i didn't know what to wear for paintball. i think it doesn't really make much of a difference even if you wear layers of clothing, you still end up getting bruised. we were only given a vest to wear, and face helmets. heck, one of the guys in my team went into the game wearing absolutely no protection (kebal kah? i think he was pro). apparently i was the only one who was a paintball-virgin, so i got front seat for the quick briefing O_O.

first round i think i was the last one in my team to be eliminated, i was busy hiding behind one of those blown-up bolders, too scared to charge forward, until i got ambushed by the rival team, haha. i was actually more scared of getting nasty bruises, if anything. and boy did it hurt. i managed to shoot a guy who was busy crawling on the ground and didn't notice that i was on to him, kekeke. we played a total of 4 rounds, with me getting hit twice on the legs.

er, what happens if we run out of bullets? surrender and die? :D 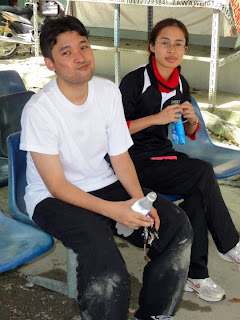 end of Battle
i didn't bruise as bad as Significant Other though. he bruises easily. haih. even his skin is high maintenance. and boy, were his bruises horrible-looking. 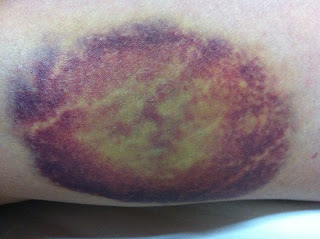 Significant Other's horrible bruising 4 days after getting targeted
later in the evening i dropped by Rinie's crib to celebrate Dani's 2nd birthday. Significant Other stayed home to watch F1 on tv. i waited for the kids to wake up from their nap, so we arrived just in time for the birthday song. didn't take many pics since i had two kids to handle all by myself. luckily i met Syaz, Dayana was quite smitten by her. hehe.

managed to say hi to Dina (insyallah we'll see you this weekend!), Munirah (waited in line together for face painting, dun even know if she knows me or not), and i said hi to another fellow blogger who looked familiar thanks to my friend Mawar. don't think she knew me either. said hello but she looked pretty blur. oh well. nobody reads my blog anyway. i write pretty meaningless stuff most of the time haha.

Dinara managed to grab hold and dump a bowl of cendol onto my lap T_T.

i realllllyyyy wanted to get Dayana to do face painting (mother was more eksaited than the kiddo), but after waiting in line for ages, she burst into tears as soon as it was her turn T_T. so i thought that if the kakak didn't wanna do, i decided to do for the adik instead. the adik was happy to oblige :D. here's my little tiger, literally speaking :D. 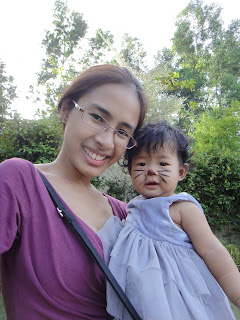 RAWRRRRRR!!!
Dayana had more fun running around with Ari and the rest of the kids chasing bubbles. see if you can spot Ari in the photo below. and i handed over rose and hemp to Syaz to be chopped. bye bye size 6. muahahahahhaha. 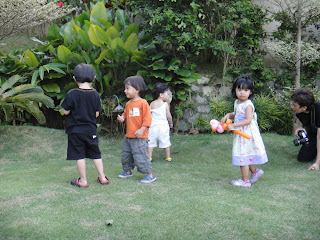 my eldest one frolicking around and has totally forgotten about me
intec is no longer based in KLCC :(. i no longer have a reason to drop by the towers just to gaze at the gorgeous scenery below. i even hear the Skybridge visits aren't free anymore :(. anyway, guess where they're moving to? bahhh... :P.

hmmm. i'll update more later when i have the time. i need to send an email out before heading home, and i'm hungry :(
from my rose garden, E`n1x at 7:53 PM