i initially wanted another dyeist to kill something for me, but unfortunately at the time she was busy with other commitments (she did reply me much later after that but that's another tale in the future mwahahahaha) so i decided to enlist the services of another fellow dyeist. i previously owned one of her dye jobs but i sold it off because the color and size was definitely not 'me'. but her dye jobs are superb (i own one of her hemp jobs), so one day while i was feeling abit frustrated i pmmed her to ask whether she had any available dye slots.

i got lucky: she said yes. glory glory~

so i bought a wrap from an Euro mama (who i have yet to hear from, i hope she is well) and she had it sent directly to the febeles 'I'. i decided on a 55 azur in a size 4, since i liked how it rucked, despite it being thick and guni-ish.

now this was hard. browsed to existing photos of dyed wraps and the more i saw, the more confunded my brain became (i hate customs =P). the base of my 55 is blue, so i needed something that could blend in. i initially wanted to do a Fera lookalike, purplish-aquamarine - it had two of my favorite colors, purple and blue. but if i were to request that, it would be her 3rd identical creation in that colorway. and i think she was starting to get bored dyeing the same thing.

i couldn't ask her to be creative with the colors because i didn't want to end up with a wrap that i didn't like, i wanted to love mine. that's the whole point of doing a custom, right?

ok so the other option was to recreate the colors on a wrap i came across while traversing TBW. it had three of my favorite colors: blue, pink and purple :D. 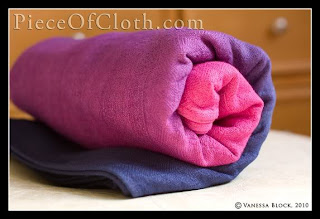 Luminescence taken from Vanessa's FB page
inspired by this:

Psling Berry Berry Gradation
and so after bugging her with numerous of PMs (changing my mind like every 5 seconds) and even to the point of asking to redo (sorry dear :P), she came up with this for me: 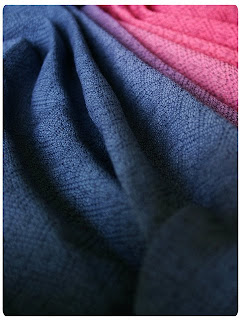 a berry berry of my own :)
i loved it so much i kept the page open in my iPhone browser to stare at it. hahahahah. cannot wait. for it to arrive and to see it irl :D.

my 55 search is officially over. i am sooOOoOOo banned from TBW after this T_T.