proud to be Malaysian?

sometimes i just can't help but shake my head at the attitudes of Malaysians these days. not only do they not have proper manners on the road (cutting queue, being inconsiderate to others esp. pedestrians, yada yada), they don't even have proper manners among themselves!

left the office quite late today even though the company was on half day today (i was busy depleting the company's paper supply) and Significant Other wanted to buy FIFA 2010 and a new PS controller so we drove all the way to the Curve to get it since KLCC was out of stock. after getting his junk we thought to have a bite to eat before heading back. so we headed off to our usual - Warong Penyet. 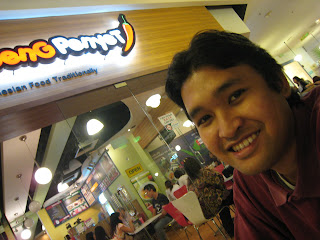 Significant Other's fav ayam place
so naturally at 8-ish most of the restaurants were packed, and this was no exception. only thing is, there were a few couples (as in TWO people) who were sitting at tables that were meant for four. but that was still ok since the table can actually be split into two to cater for two different couples. there'd be a small gap in between since the restaurant is slightly cramped, but that's ok, as long as your tummy is happy, right?

so there was this middle aged MALAY couple seated at a table by the window, occupying two tables. they were waiting for their order to arrive, totally oblivious to others that were mingling around waiting for a table. the lady had her handbag on the table, and they arranged all the sauces and chillis on the connecting table. the waitress saw us standing around so she went up to the couple to ask if she could separate the tables so that others could occupy it.

but did you know what the old guy said to the waitress? the table they had was too small to hold all their food! wth! *$&*(@#&@#^(*@. for one thing, if she would have removed her gigantic bag (that took up 1/4 of the table space, i might add) they would have more room for their food, wouldn't they?

come on man, others seem to be just fine with their small table. and did you notice that there are others waiting to find a place to sit? not to mention some of them had young children with them. how INCONSIDERATE can you be?????? 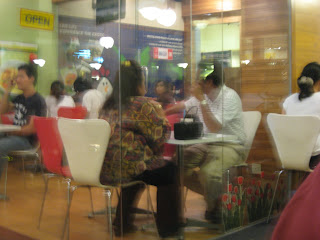 the evil couple. you can't really see the table from our angle
if we had Dayana with us, Significant Other would have told the stupid couple off. if he had wanted a bigger table, go eat at those expensive restaurants lah. eeeeeeeeeeee benciiiii. i hate selfish people. see how bad Malaysians can be sometimes?

we were lucky enough to have another couple (i'm not sure foreign, but definitely not Malay) happily separate their table for us. they ordered a lot too. but i don't see them complaining of no room. bahhhh. i was so irritated that i took a photo of the stupid couple. even though you're almost at the age that's considered 'warga emas', doesn't mean you're entitled to two tables for only two people. were they planning on eating the table too?

i really don't know if i should be disappointed in Malaysians or just plain Malays. i even read in someone's blog about how this bunch of teenage girls had the audacity to cut in front of queue ahead of a foreigner in the toilet and even started bitching about the lady in their tongue language after the lady kindly told them that they should queue up in line for their turn. how sorry is that?
(i need to find that blog again to confirm my memory. that's the trouble with blog hopping. you forget what you read and from where haha).

so... should i be proud of how the people are projecting our country to the outsiders?
from my rose garden, E`n1x at 10:45 PM