it's been awhile since i last joined any form of treasure hunts! i soOoOOOO miss joining them. it's fun! what's not to like? running driving around looking for signboards that you may or may not be able to find, cursing tulips (and blaming other drivers around you), missing a turn when you confidently thing that you're right (hahaha mashi =P), snapping a photo of every single signboard you see when in doubt, and blindly following the other teams when all hope is lost.

my first ever treasure hunt i joined was when i was still studying in UTP. Significant Other's company used to organize them as well but they're for employees only =(. there's a bunch of treasure hunt events you can join that's open to the public, but most of the participants are hard core hunters so if you managed to place, that means you're really good. i'm up simply for the fun of it all. and seriously, it's fun. funnnnnnnnnnnnnnnnnn.

i was lucky this year to be given the opportunity to join Mashi's team at the last minute, her team was short one person. yay! so here was our breakdown:

mashi: our personal driver
fadela: our formal navigator
me n fadhlina: mere joyriders = the bestest position of all =P~~


i can't remember the last time i was out the door before the sun was even up.

needless to say, and quite surprisingly, we won.

hahahah. i kid you not. when they were announcing the top 5 finishers, i was already quite contented.

"no, i don't want top 5, i want number 1!", said fadela and fadhlina, full of conviction.
(they lost miserably last year, i guess they want redemption this time, haha).

so when they announced the 2nd place winner (which was not us) the other three were practically close to tears when they found out we placed FIRST  *___*. heck, even i didn't expect our team to finish first, LOL. i mean, even the other participants didn't  see us as competition, and didn't dream that an all-girls team would take first prize. bahahahhahaha.


the treasure hunt route covered a little bit of Bangar, Hartamas and Publika, before ending up at TGI Friday's in KL. last year the team were a little too hasty, checked in early and missed out on alot of correct answers, so this year their strategy was to go slow and steady. by the time we were nearing the last few tulips, it was almost 12.30pm. we were one of the last teams to arrive at the checkpoint. by the time we arrived, a bunch of other teams were busy piling up their plates with food.

there was a roadblock challenge that we had to complete before continuing on with the treasure hunt. prior to that, we had to submit a form, in which we had to guess which photo belonged to which movie or tv show.


the roadblock station only opened at 9am, so we had plenty of time to complete the form while chilling out in the car (gugel sampai habis battery kot haha). the first challenge required us to throw plastic eggs into an egg carton. you think easy ah? they gave us one round of practice and still failed miserably. i think only 2 team managed to score 1 mark each. our team? telur ayam T___T.


the second challenge required us to 'touch but no see', putting two hands into a pillowcase and then guessing what items were inside and and how many were there. mashi and fadhlina did the raba-ing, and i was so amused that i forgot to take photos.

if you can believe it, our driver managed to miss a junction, hahahah. she was busy honking the other cars as we past them by, cheyyy confident je, skali amik kau, we missed a last minute junction and had to do a go-around to get back on track, bahahhahahha. by the time we reached the next tulip, the other teams were nowhere to be seen. kagum really, because that stretch took us quite some time to complete.

out of the 30 route questions, we got 2 wrong. seriously they were not a walk in the park, some of them we took quite awhile to spot, and for the ones we got no clue of, we simply took a blind shot and still end up getting them wrong. HAHA. some answers were pretty literal, some required a bit of thinking, and a few were so straight forward that you tended to second guess your answer.


prize moneh! no i didn't win the whole sum, it's split 4-ways among the team. syok habis. can pay loan shark.


this team won 5th place. they were also one of the fews teams to come in last, like us. slow and steady win the race, eh? 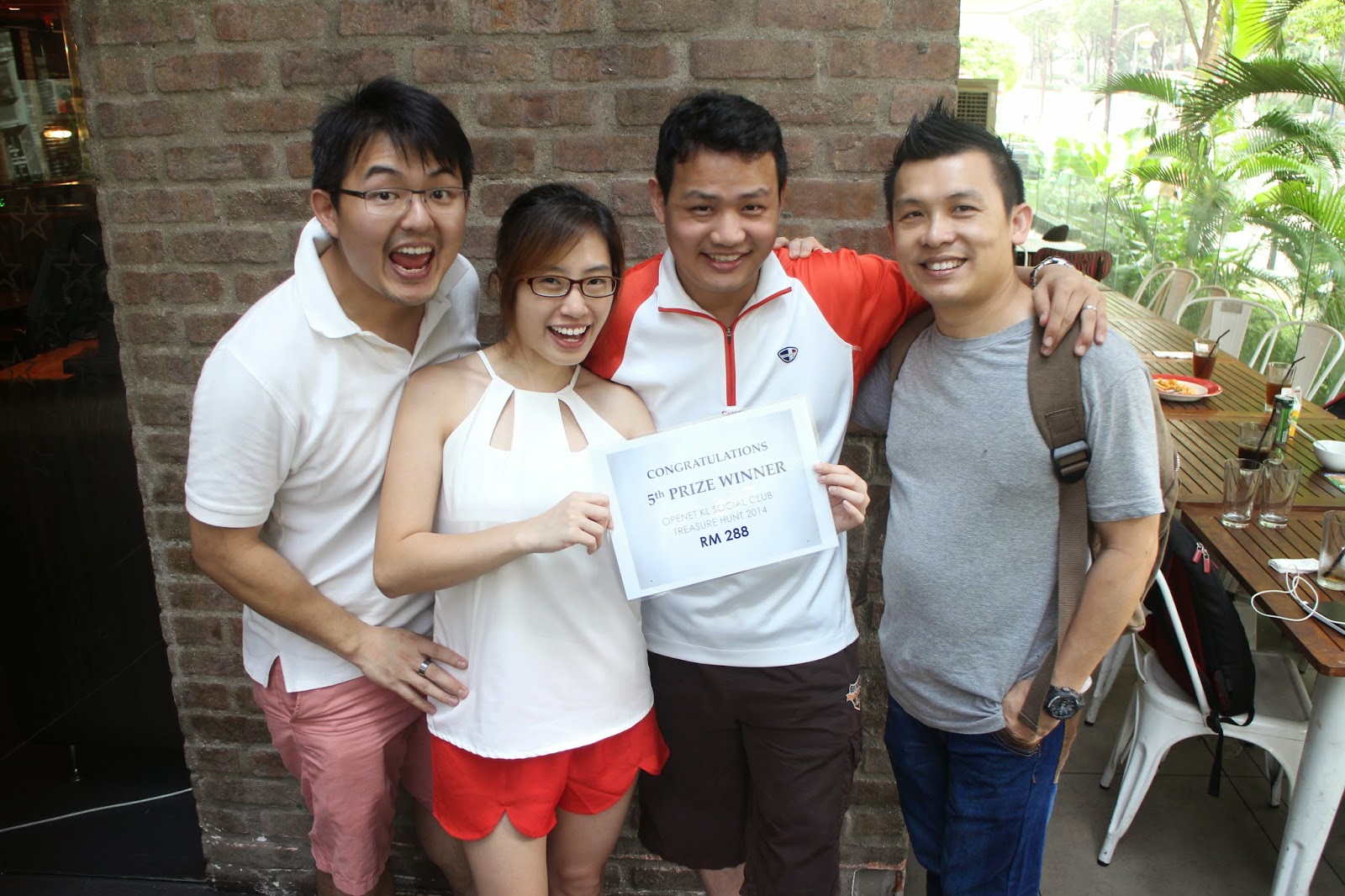 the treasure hunt event was organized by Purple Antz. at one point while we were running around Bangsar being literally lost (we misread a tulip), some random person asked us how to join. haha.


count me in if you plan to join a treasure hunt and are short of resources ok. HAHA.
from my rose garden, E`n1x at 3:44 AM