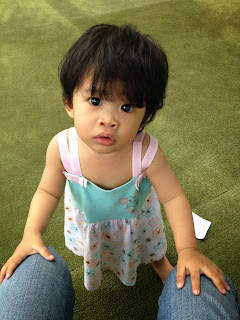 - she used to burst into tears at strangers for just staring at her, but now that she got legs, she's a 'see no touch' kind of person haha. walk walk walk among everyone like nobody's business, but this time if you stare at her, she won't cry - she'll simply turn around and walk away. lolz. just don't pick her up lah, that's all. you touch, she cries.

- she's not afraid of cats! i only found out when she saw a cat one day and went closer to pull its tail and grab a handful of ears. geram kut tengok kucing. poor cat. i had to rescue it from Pia's reaching hands. hahahahaha.


- she likes observing. she'd sit and observe when her Daddy performs prayers. she'd observe diligently each time Dayana's uses the ipad (and that's how she learns that she needs to swipe the screen for something to happen :O), and yesterday she went to sit beside Dinara and listened to her mengaji. lol. banyak curious, this one.

- she got her hair cut by bibiks! nOOOoOOoOOoOOoOOOoOoOoO


and for the other members of the family updates:

#2
someone got a new toy last weekend. toys like this will cause him to ignore food and sleep.


and like the book 'If You Give a Mouse a Cookie', our version would be 'if you give Significant Other a Toy, he'll be on the hunt for suitable accessories next' =P.

he keeps calling it 'ohsem'. i for one have yet to see this awesomeness especially since i'm a mac noob and he only just joined the macbook bandwagon. my sister is a macbook user. in my time i had to lug around a fat heavy CPU to and fro campus, and i used to stay above G floor.


#3
i got the kids to watch My Little Pony recently (i got bored of them watching Dora, Sesame Street and Sophia the First -__-). i think sometimes the Daddy watches MLP too, he seems to know the names of the ponies better than i do, bahahah.

Mommy yang terlebih gedik to buy them toy ponies =P. but the kids enjoys them all the same. it's just a nightmare to take care of their hair though. tried brushing the tail out, big mistake.

there's Rarity, Fluttershy, Pinkie Pie and Twilight Sparkle. i'm they're missing Rainbow Dash and Applejack. if you see any of those two being sold anywhere, could u let me know? they should cost about rm22.90 each.


see? cousins bonding over the ponies. hahaha. we had a small family gathering at my Uncle's house before the fasting month. Dinara even abandoned her Sofia toy for Fluttershy to join the gang. hehe.