D recommended me her favorite nyx soft matte lip cream (smlc) in Istanbul. "a must have color", she says. 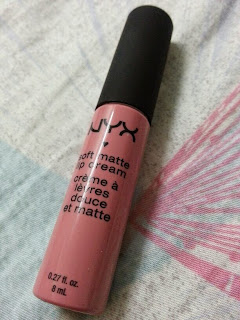 oh you know me, asal promote je, you get caught up 'in the moment', like so many people i know. seriously one day someone will be promoting dog poo and even then everyone would get drawn up in the 'hype' despite the mess. hahahahah.

my husband pun dua kali lima. between the both of us, we somehow got convinced to purchase a seven thousand vacuum cleaner, crazy u think? best purchase ever, despite the crazy price. we still use it to this very day.

well anyway, the other day Mashi went on a shopping spree at Paradigm so i got her to get me one of those smlcs sold only at Sephora (which are usually sold out due to its popularity, i hear) (mv y u no have Sephora???). another option to own one of these lippies would be to buy online, alot of people these days pre-order them overseas and sell them here.

sorry lah, i just joined the bandwagon. never heard of this brand before, sorry hahaha.

you can just google them nyx lippies, there's tons of reviews for every possible existing shade, so i'm just sharing with you what i think of this lippie, for someone who has really dry and chapped lips.

mashi bought Istanbul for me, the very same shade D was gushing about. despite coming in so many colors, the store only carried three shades. pfffft.

(the thing with these imported brands is, stock availability is always uncertain so everyone opts to buy them overseas instead).

my take on them (after only owning this lippie for less than a week haha):

- the lippie had a pleasant smell, reminds me alot of red velvet cupcakes hahaha,
- the lippie dries down into a soft matte finish, which may be a bit drying for the lips. someone says it wouldn't do to apply lip balm first, but i'd apply lip balm afterwards and reapply accordingly,
- doesn't wipe off as easily as other lippies, so the color lasts longer on your lips,
- it's rm26 per lippie at Sephora, got some online stores that charges you as much as rm38 T__T but my friend recommended me this nice online store that charges rm26 only, just pay for postage =D.

i even managed to corrupt my colleagues into getting a couple of lippies as well bahahhahahahha. i don't think i'd ever get to own every single shade in the smlc range. a friend said that you should at least own a red, a pink and a neutral, so i got myself reddish Amsterdam to add on to my pinky Istanbul.

my friend Z kagum gila with my enthusiasm, hahaha. she already had Ibiza (which i didn't know she had), so she added on Monte Carlo (another lovely shade of red) and Stockholm (as nude as it can get with a hint of pink). my deskmate N got herself Stockholm (which she loves to bits hahahah rosaklah deskmate aku), and another two colleagues bought Istanbul and Antwerp. we got to split shipping! hahahahahah.

i tried to get my chat friends' opinion on which color would suit me well so i created the below collage for them to decide. 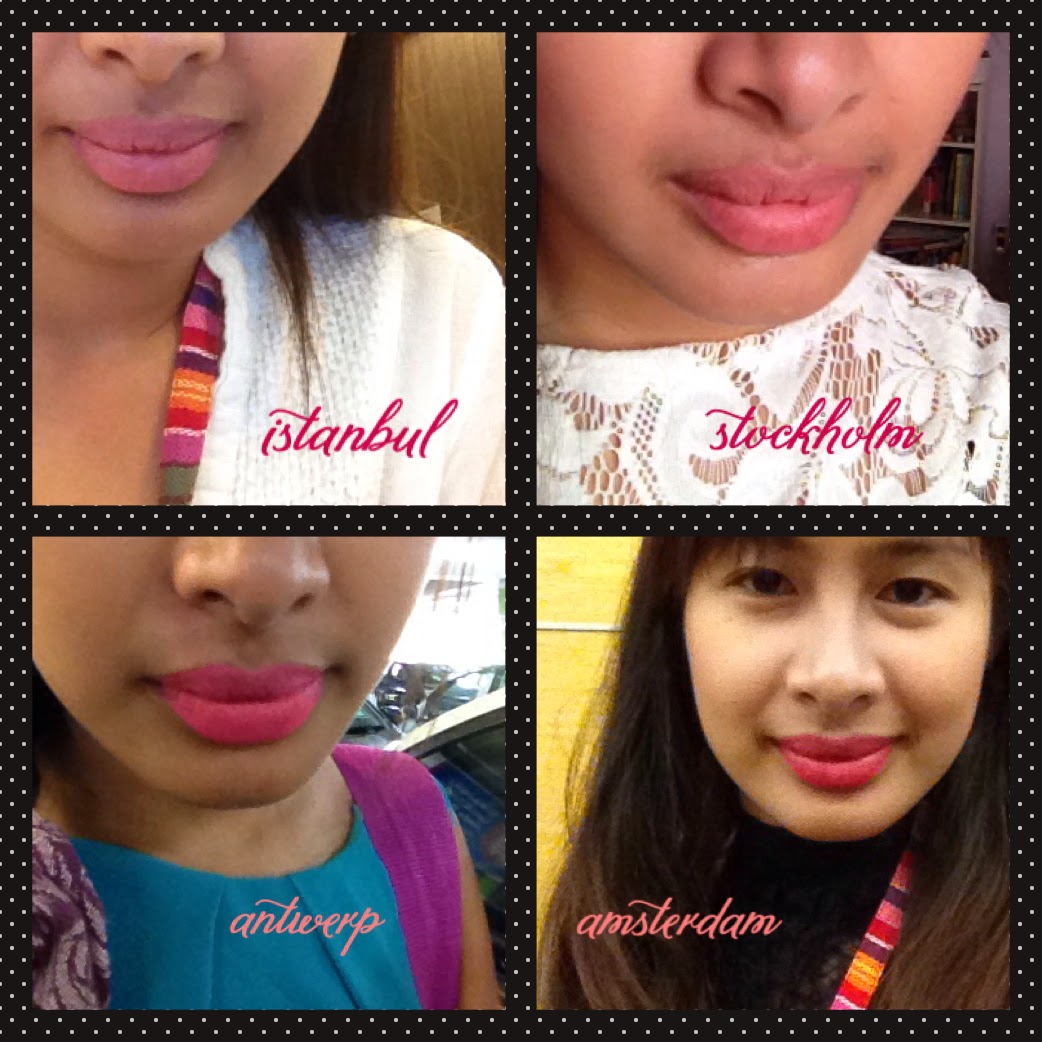 ok so i guess the Antwerp shade looks as if i took a crayon and scribbled on my lips hahahahaha. that color imo would suit fairer skin. but i love Amsterdam! when i first got it i was dismayed to see it so red, but i wore it in the office and a bunch of people said to me, "eh you wearing makeup today?" T____T

Istanbul pun pretty. it's a very soft shade of fink. Stockholm is for those who wants a subtle shade to wear (Z who loves bolder color statements for a lippie would say, "macam tak pakai apa, baik tak yah pakai hahahah").

D tells me, "you should start wearing makeup la".
ok finnnnne. please recommend me stuff. and thennn maybe i won't get that line of 'you don't look your age'. hahahhahahha.