it's a rare occasion to wake everyone up in the wee hours in the morning, usher everyone (and everything) into the car, just to catch a plane and end up somewhere else entirely in just a few hours.


any guesses as to where we've headed off to?
=D

somebody was so excited to leave for holiday, that she even packed her own bags. HAHAHA. Dayana saw her Uncle packing and i think he told her to get a move on because when i came back that night she told me she had already packed her stuff.

at first i thot Kakak had helped her to pack but then again i never told her what to pack for the trip. so i took a quick peek into her Trunki and found out that Dayana's definition of packing was: to take out a bunch of her clothes from her chest of drawers (not even stopping to look whether it was hers or Dinara's) and made sure she packed it full to the brim. the only thing that she managed to pack right was to include hers and Dinara's swimsuits, haha.

when i repacked her things (with the proper amount of clothings for both kids), she took one look at the contents of the Trunki and asked me, 'mana cukup, Mommy?' O_o. 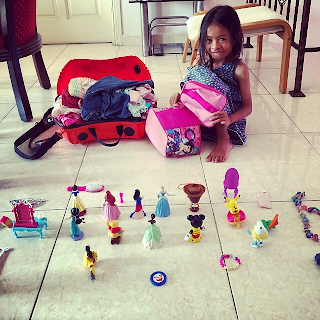