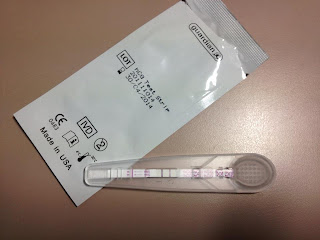 somebody decided to be cheeky and post this on FB.

out of the blue i bought a cheapskate upt test and had a go (i've never splurged on sticks before. if i bought clear blu, then i'd have to frame it). i took the test a few weeks back, it came back -ve. this time however, i got a different result.

Significant Other left his wallet when he left for Langkawi so i had to courier it to him. ok so this time i decided to be creative. i thought why not let him see for himself instead of me telling him? i don't really remember how i broke the news to him during my last two pregnancies, i only remember him diligently asking me 'dah P belum?'. real cocky of him, see.

when the parcel arrived the next day, he only commented on how he got his wallet and how prettily wrapped the box was (i recycled a gift box, complete with its original wrapping paper). told him to check the box again, there was something else in there. he almost threw away the whole box -___-

i should have remembered to mail the instruction leaflet with the test.

and so he asked, 'so what does this mean?'. i don't know whether he was feigning total blankness for the fun of it or that he really didn't know (forgot that only females know this test the best). his friends on FB had a field day.

no wonder my rumet messaged me out of the blue. cheh.

the best part was, he told me, 'do you know the worse thing? i actually touched it with my bare hands!!!'. oops. LOL.

i didn't think he'd post on FB so soon @_@. it's still too early, and you know how i feel about jinxes *touch wood*. i wonder if he's more excited than me.

the only symptom at the moment = metallic taste in mouth.

so here's looking forward to everything that comes with the word that starts with the letter 'P'.

p/s. some people can be so dense in their calculations, especially when they're inexperienced. i mean, how stupid can you be??
from my rose garden, E`n1x at 11:06 AM