no, not J-card day.
it's only JM fever.
unfortunate to admit that i never knew who JM was until my friend N told me he designed SN's wedding outfit.
i was like, 'ooOoOOOOoOoOOo' (without substance) =P.

sorry if i live in a cave where fashion doesn't exist.

my first purchase for JM was via Zalora (who many would like to pick a bone with them. or however it is the saying goes...). sold it off immediately because the cutting made me look like i was wearing a sack of potatoes.
yes, people actually buy and sell. who would've thunk?

and i thought only carriers hold resell value...

i must say, he designs beautiful outfits for raya.
i wasn't that crazy to attend J-Box last month. but i know there were many die-hard fans who did. kudos to them.
here's a quick pic of the ones he had to offer during the J-Box that i like.
i have a friend who owns 4 of his designs.
and there are probably more people out there who owns more than that. LOL. 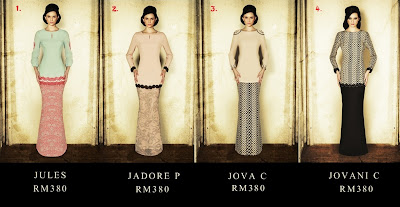 this time round, JM's gotten smarter and decided to do a preorder instead. YAY!
great way to handle J-crazed fans.
i've set my mind to just drool over his latest collections for the J-Raya.
here's a pic of the ones i like (i've narrowed it down to ONLY these two three): 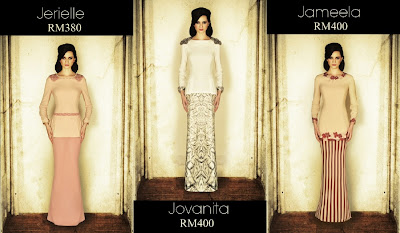 my friend has already PMd me asking if i'd be going for his J-Raya. haha.
i wonder if Significant Other would be amused.
dresscode: Jovianista

i dread to imagine myself showing up wearing the same outfit as 50 other people in the same room. hee~~~ we could take a boria photo of something, lalala~

i saw a photo taken by Jovian fans via twitter. it's such a nice photo.

more details of this upcoming J-Raya on his website.
from my rose garden, E`n1x at 2:57 PM