it's a double-faced easel with a chalkboard on one side, and a whiteboard on the other. i would've thought that when buying the easel all its neccessities would be included - apparently not. it only came with magnetic alpahets, a board eraser, paintbrushes and a cup holder. paper, chalk, whiteboard marker, sila beli sendiri ya. 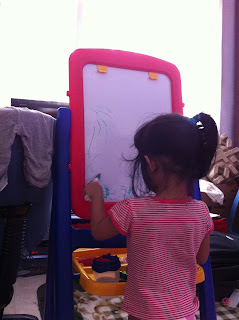 the thing with kids these days is that they never seem to get that they have to put back the cap on the marker after use, else the ink will dry up. heck one marker has already passed away no thanks to the kids, batang hidung cap pun tak jumpe. sigh. baru je ingat nak beli those special markers from Crayola. i'm thinking 1000 times now, no point if the ink dries out simply because they keep forgetting to put back the cap? (i've confiscated all form of marker pens from them edi).

well anyway, i actually wanted to talk about the chalkboard. did you know new chalkboards need to be 'seasoned' before use? i never really bothered to know until i got this easel (it was written in the instructions lol). the reason why we do this is so that the very first drawing on the chalkboard wouldn't stay on the chalkboard forever and couldn't be erased.

chalkboards may seem smooth on the surface, but they are actually fairly rough and porous on a microscopic level. when we first draw on the chalkboard, we jam chalk into the little pores and clog them up with lots of chalk. then we erase the image and spread chalk dust into all of the surrounding pores, so you end up with a ghost image. ghosting is when you draw on a chalkboard and after it is erased – you still see the images, but in black.

to season a chalkboard, take a full piece of chalk and run it on its side over the entire surface of the chalkboard. make sure to rub it in well. once the board is covered with chalk, erase it. this will put an even layer of chalk in the pores all over the board. and so you won't have any problem erasing your drawing and leaving ghosts behind. lol.

the kids were delighted when i took out a piece of chalk (don't think they've ever seen chalk before) and rubbed it all over the board. they took delight in rubbing it off, and also to break my new chalk in half T_T while doodling all over the chalkboard. the bad side about chalk is that they accumulate alot of chalk dust. haih. nampaknye mommy kene vacuum more often than usual.

anyone know of any school teachers i can scalp chalk from? =P~~~ i only have white chalk though. where to find colored chalk ar?
from my rose garden, E`n1x at 10:56 AM