for the past 2 weeks she's been going to school wearing sports attire. i can only imagine the patience the teachers have with the kids. not easy to get the kids to follow your instructions. especially when they start to feel tired, cranky, and in some cases, crying for their parents, lol.

meet the little one, who thought that it was a fun idea to follow, until the heat got the better of her: 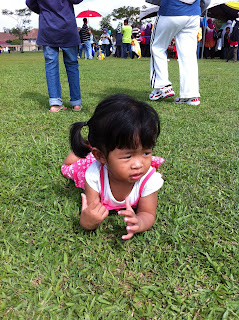 cik kiah mogok atas padang rumput
i kinda wished they had the games indoors, it was so hot for the kids to sit under the sun while the performances were going on, everything seemed to be melting in front of my eyes hahaha. other branches of LC were there too, but it seemed that Platinum had the most kiddie participants.

look at the costumes they had to wear, LOL: 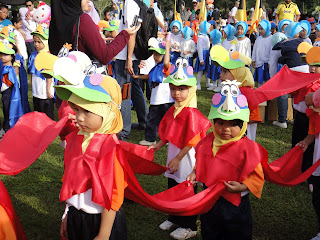 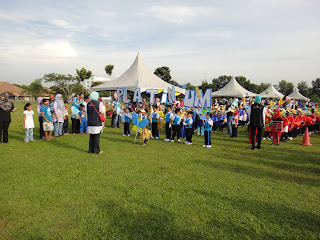 LC Platinum LOL
after the march parade there were the student performances and then only the games. the skies were so clear (and hotttt pergh i basuh selimut hasben 2 kali pun boleh kering in a jiffy hahahah) that by the time it was time to start the games, this little missy started to lose interest in participating: 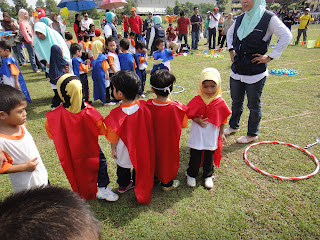 bad mood due to heat
we participated in a parents game too, btw. Dayana refused to join until she found out that Mommy and Daddy were joining too. Daddy was amused at the whole she-bang (being first-time parents attending their first kid's Sports Day), but i told him not to expect 4 to 6-year olds to lontar peluru, lari 2 ratus meter and lompat jauh any time soon.

a final photo before heading back: 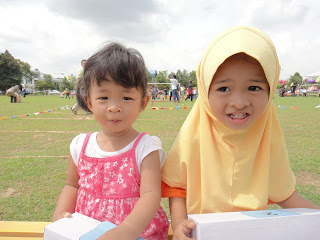 they each got something
and later in the afternoon after attending Significant Other's friend's wedding in Setia Alam (warrggghh jauh sehhhh @_@ but i finally realized if i took the 60sen toll i wouldn't have to go through Klang roads oops) we dropped by Starbucks (they have drive-thru wor). ade orang tu perasan best sebab he has the Starbucks card. hmmm... maybe i should get the Chatime card, no? =P~ 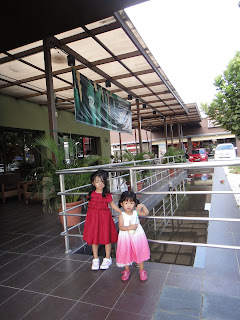 at Starbucks. look at the Starbucks monster that stole my drink @_@
from my rose garden, E`n1x at 11:38 AM