decorating cakes that is. most of you peeps tau camne nak makan je kan? =P.

i think i saw her announcement a couple of days on FB before the day of the class, and since i was sorta free that morning (March 3rd) i initially thought of just dropping by to observe the commotion.

miraculously i got lost even after using my GPS that nina had to send her husband to save me haha (it actually did take me to the right location, except it didn't take into account a steep hill that i actually had to go around it to reach nina's house lol) i was already an hour late so imagine my surprise when i walked into the house to see ONLY these two: 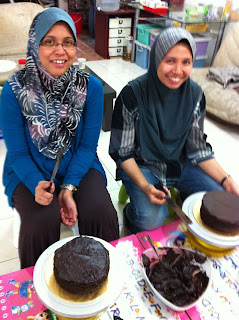 check out noli's cake! =P
i absolutely love nina's chocolate cakes. they're moist, they're yummy... well anyway, she gave each of us a nekid cake fresh out of the oven, a turntable, a spatula, and a large bowl filled with ganache (which is really easy to make, after this tak yah la nak spend rm15 for chocolate spread, providing i rajin nak buat sendiri) and then you're on your own *imagining nina laughing evilly in the background*.

if you're a chocolate lover you might be licking the ganache off your fingers while decorating the cake. not me. i like chocolate, but i'm not that big of a fan. call me crazy. my colleague does. haha. nina gave us a little demo on how to slather the cake with ganache (she made it look so easy, nyampah aku) and then it's do or die.

FB was a pro, so was noli (diorg ni rajin bab baking2, nyampah lagi aku haha). biker mommy sya arrived at the hour a half hour later (i still can't believe i actually know a minah rempit irl wahahahahahah). i had fun. nina taught us not to be kedekut with ingredients (heh, we all were ok, it was how we were brought up to be ahahahahah). well, at least i now have an inkling on how to actually decorate a cake (cantik tak cantik is another matter ok). 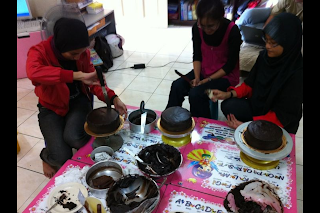 busy mastering the slathering to perfection
did you know those rippling effects you see on top of cakes also required skills? nina even had this triangle thingy that created the ripples. we first tested it out on a slice of bread though. the three of them had so much fun testing it out (and then later eating the bread T__T). you could also decorate the cake using a fork, which FB did after re-doing her ganache. 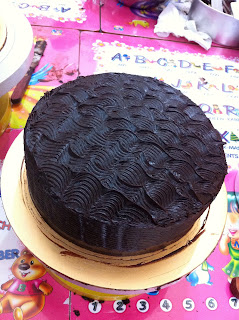 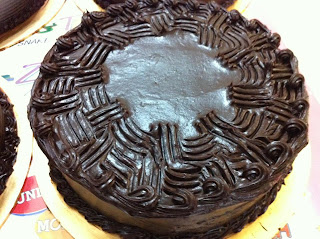 FB decided to stick a fork innit hahaha
on the side nina showed us how to make cream cheese and slather it onto a square-ish red velvet cake for a customer (round is actually so much easier than square), how to make ganache from scratch (sya took a video of this), and also how to make those sugar flowers you stick onto cakes to make 'em pretty. i dah lupe what it's made of, buttercream?

and again, teacher nina made it seem flawlessly easy. i have no patience, and cerewet to boot, so i only made one, so here's my masterpiece: 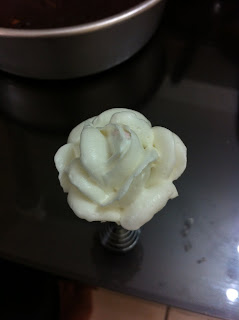 looks like melted vanilla ice cream
aaand here's my final masterpiece. the leaves were a little cacat because the piping went amok on me. and i wanted to just leave it empty because i hate eating icing, but since everyone started writing stuff on their cakes, so i decided to write my children's names on the cake (my friend says his cake-writing is much better than mine, chis). 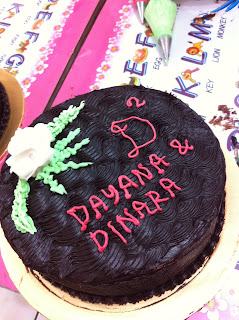 class went into overtime... as usual haha. noli and FB were in a rush so i didn't have time to snap a pic of theirs cakes... 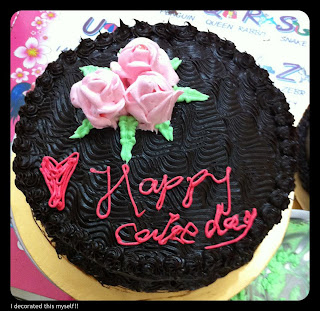 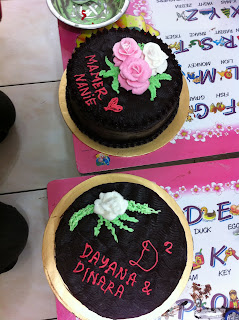 mine and sya's cakes
and here's a pic of the students with the ticher: 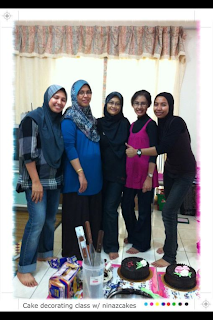 love u nina!
i think nina might be opening cake decorating classes in the future. you might wanna ask her. glad to be a part of her guinea pig class! LOL
from my rose garden, E`n1x at 2:48 PM

she stays in taman sutera, Kajang =) i'll def let u know that you're interested lol~ she'll be so happy hehe

aisey, jauh but only coz of where I live. It's all relative, innit?? haha. Kalau ada lagi, and if you're going, i nak ikut! if i go alone, confirm sesat. still not buying a GPS :p

would u be interested in making donuts? nina plans to hold one this 31st... rm10 and she'll supply everything you need. if i'm free i'm definitely going. if not to learn, but to eat =P~~~