elmo without the L

it's been awhile since i've blogged. the past week has been sort of an emotional roller coaster ride lately. let's just leave it at that.

for one thing, project's started. so we're currently coordinating among ourselves sharing the server, cursing the server and cursing summore each time we calculate the total remaining test cases for us to execute (we were lucky we newbies weren't given WRs yet, just understanding the regression TCs were havoc alone).

i babywear a lot less lately now that si kecik prefers to tag along with her elder sister in lots of things - walking, messing up my room, and being opinionated on everything that it's useless reasoning with her. when i do baby my wraps every once in a while, the kids will start fighting over who gets to be carried first. but that's only like, 5 minutes? buang karan je ku eek out a DH. might be having a stash sale someday after i figure out which ones get legacy status. in the meantime, some are out chilling with friends.

the eldest isn't feeling well, i think it's due to a gassy tummy. she refuses to eat anything, not even her favorite food, and poops cair throughout the day. hope a spot of colimix would work wonders for her. she doesn't put up a fuss when i tell her we're going to the Dr. like last time - i wonder if she'll put up a fuss if i drag her to the dentist *muahahahah*. she hijacked her MyKid from me this morning, so i reallyyyy hope it doesn't end up missing. things simply disappear into thin air whenever my kids get their hands on them. and when you ask them where something is, they'll simply ignore you. chis. even after stressing how important that they remember (lol kids. at their age you thinks they wanna even bother listening to you?).

well anyway, last weekend i spent my days in Langkawi. this time round my stay was slightly pleasurable than usual, Significant Other decided to give Sheraton Langkawi a run for his points and boy was i blown away by how gorgeous everything is. of course, you can't beat Andaman's beaches, but i've been to Langkawi so many times already to know that i'm not much of a beach fan - too hot. this time around, despite being school holidays, there didn't seem to be many people lulling about. did everyone suddenly decide to go for holidays overseas? 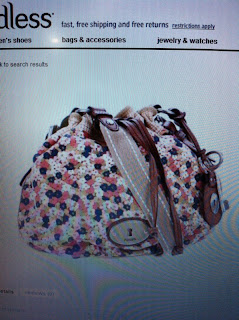 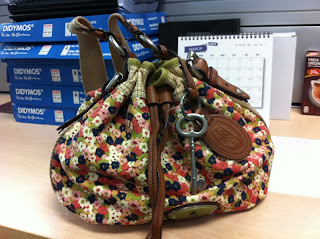 the actual thang
i'm absolutely loving my Fossil tote bag i got from endless. beats the price at the boutique, price difference exceeds rm400 no kidding. and you know how difficult it is for me to get attached to bags because they don't meet certain requirements. to commemorate how i love my bag, last Sunday i managed to empty out a 400ml bottle of water into the bag.

T__T (stupid bottle. yeaaa when in mad, blame the bottle).

i was lucky all electronic equipments were in bag's side pockets. however 3/4 of everything was dampened, nothing spared. my cards n bank books n tissues n recipts were literally soaked. Significant Other had to turn on the car heater to full blast just to dry it out because mister sun chose the exact moment to give way to mister rain, sigh (he also managed to melt my chocolate bar in the process hahahah).

i got a haircut in Langkawi. someone told me i didn't seem to look any different, but i can 'feel' the difference - i lose hair weight!

before i forget, MarryBrown ain't bad at all. lol. definitely beats Popeye.

oh and one other pleasant surprise i got while boarding the plane back to KL. this time around the plane back to KL was one of the older ones - so no cool in-flight entertainment system =P. i was also one of the last to board the plane (that's so like me, always waiting til the last minute, and then running like hell to reach the gates in time). it's kind of fun traveling alone, btw. you don't have to worry about anyone but yourself and you have the chance to actually see and observe others who are boarding the plane with you.

but that's not my point of the story. since i was late, the cabin was already in chaos with people shoving their luggage into the overhead compartments, people still trying to get to their seats, cabin crew jostling around the aisles trying to get everyone seated before the plane took off. while i was rushing to get to my seat, who did i come face to face with but one of my bil's good friend, Nadya =P. in my haste i didn't bother focusing on her face until she started giving me this blank stare you get when you're trying to figure out if you find someone familiar and trying to find out whether you actually know the person or not. hahahah.

someone had already hijacked my seat so Nadya offered me another row in which i could still claim a window seat - on a Monday night, the flight wasn't full. i haven't seen Nadya in years, not since my bil left Segi to pursue his degree overseas and that was over 2 years ago. she's one of Dayana's biggest fans =D. she used to seem like one of the guys. look how far she's gone now =P.

oh btw, thanks for the urm, 'souvenirs'! my Dad was specially pleased (he got hungry waiting for me in the car). and so was Significant Other. he kept pestering me to ask for more nuts, so imagine my surprise at the quantity that seriously surpassed Significant Other's expectations hahahahah. too bad i didn't take a photo.