one day to Christmas

last Thursday brought Dinara for her 3rd month checkup. haha. she'll be 4 months this Sunday, so at the time she was already 3.5 months old. she has officially doubled her birthweight, now weighing at 4.9kg. i get shoulder pain each time i wear her in RS for long periods of time. i'm so used to cradle carrying her that it feels weird whenever i try to t2t her in RS, haha. now's a good time to start utilizing my wraps, don't you think? lol.

Dayana has begun to string a jumble of words into quite meaningful sentences if you care to listen to her properly. she surprises me sometimes, at other times she just annoys the heck out of me, especially during sleeping time when she refuses to go to sleep before 12am @_@.

i've started a new chapter in my weeekday life already. wish i could've started it next year, but oh well. starting now means nobody in the office, which means less unfamiliar faces to meet in one shot, haha. on the first day i arrived sharp on the dot only to have the doorbell go unanswered, hahaha.

i come in here barely a couple of days and already i feel like it's a mini reunion. the place is a whole lot smaller than the former. and i finally get my own cubicle to mess up with whatever junk i like! rotfl. but unlike the former, there isn't any special place to pump, so i have to make do with their sort-of exec toilet which really reminds me of those toilet cacats they have over at the twin towers.

the food here is definitely a whole lot more variety than the former, but i have to watch how much comes out of my purse, and leave a little bit for parking by the end of the day. parking alone costs about rm8ish a day give and take. huwarrgghhh. and don't get me started on gasoline. and the nightmare of a traffic that awaits me each time i exit the PJS toll. sigh. i guess it was also a good idea to have 2 of my cc's terminated before i started, eh? =P

hair loss has begun to take its toll on me. been realizing this everytime i brush my hair in the mornings but i've been in denial and chose to ignore it muahahahah. finally allowed reality to sink in this morning when i shampooed my hair and clumps practically came off each time i ran my fingers through my hair O_o. too sayang to trim, but i'm too chicken to try something new. i've been meaning to try that liese hair dye thingy, but i haven't dyed my own hair for such a loooong time. the last time i highlighted my hair red it was done at a store in Taipan, hahahah. tempted to rebond my hair, but poker straight is soo not in these days. what does a relaxer do, anyway? should i get a fringe? =P

i got a new cover for my iPhone yesterday at Machines. i was bored with black, despite Significant Other saying that we should be one big BLACK family haha (his cover was black, Dayana's was also black... boringnya). initially i wanted to get Speck's PixelSkin HD, but the salesguy pointed out that the HD version was kind of keras. tried it on my phone, but didn't look as if it was shock-absorbent, so in the end i stuck to the older PixelSkin, where the 'pixels' on the cover are slightly larger than the HD version. i bought it in pink as that was the only one available, and which has now started to grow on me =D.

mine's the pink one. although it looks more shocking irl
i also bought a dress for Dinara at Baby Gap. eeeeek. i dropped by the store after i received an sms saying there was an additional markdown on sale items. big mistake. i would've bought more though if i didn't exercise proper control, haha. there was this adorable reversible jacket for Dayana, but i kept thinking whether she really needs it or not... ended up not buying it =(. so apart from a dress for Dinara, i got a kewl-looking blouse for Dayana, thinking that once Dayana outgrows it, Dinara gets to wear it too. haha. it's no fun being the hand-me-down kid =P.

but put it this way, i'm more willing to spend a bit more on clothes for Dinara compared to Dayana when i could only afford Jusco and Sogo brands. keke. i guess that's why my second kid is also a girl =P~~~~

have you read Mini Shopaholic? i think:
- Becky is crazy
- i wish i had a husband like Luke
- i wish i was Suze =D 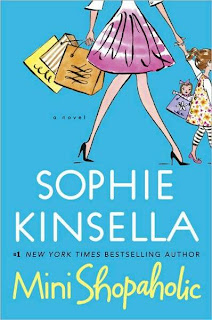 i bought the UK cover version
patiently waiting for Kay Hooper's latest book. i kinda read it already at the bookstore in US but i didn't buy it because i wanted to get the paperback edition for my collection =D. i read books in the loo. hahahaha. what a way to pass the time =P~~~~~

tomorrow's Christmas! if i was still at my previous company i'd be on holiday today. i got no idea what my plans are as of tomorrow. i love Christmas - the shopping malls, the sale, the decorations, the atmosphere, the holidays =P. i only wish Raya was hyped up just as much as Christmas is every year lol.

ok i'm merapuing. i haven't downloaded my photos so i still got lots of backdated entries to post. ttyl. hope everyone has a wonderful Christmas holidays this year!heck, we even have out own miniature Christmas tree at home, courtesy of Parkson Grand KLCC =)
from my rose garden, E`n1x at 3:03 PM

i wanna read Mini Shopaholic too!
eheh
gonna get it soon