we'd have checked-in here right after checking out from Andaman, but unfortunately most hotels, including One Helang, were unavailable for Sunday. i said if worse come to worse, i wouldn't mind sleeping in the car. hahahah.

Significant Other was not amused.

i wouldn't mind AB Motel, but being the 'manja' one, he insisted on finding a more better place. i asked him if he would rather sacrifice comfort than paying more. i've heard stories of cheap places that came with their own room resident: bed bugs. ugh. after this i'm bringing my own mat and will be sleeping on that as a lapik for obvious reasons *shudders*.

so in the end, we chose this hotel due to its location. it was situated right beside the airport (you could just disembark from your plane and drag your bags here without even having to hail a cab), and it was also about 10 minutes to the school. also, the friend we met up for dinner stayed there previously and according to them, they were quite satisfied, despite getting a room which faced another building, lol. we stayed two nights at this hotel.

the foyer was really spacious, unlike Four Points who did nothing to manipulate the available empty space, the foyer had proper chairs for guest to sit down and wait while someone checks them in. further ahead was the dining area, and the glass doors lead outside to the pool. i didn't go swimming here, it was too hot and i takde geng - Significant Other had class.

they had very limited parking spots available, so if you get back late then you've got no choice but to park outside along the main road. the place was packed, btw. mostly with tourists and big families with hyperactive kids. i registered at the check-in counter alone (i came directly from Four Points).

the hotel was not situated beside the beach, but i heard someone at receptionist telling a mat salleh at the counter that they had a private beach shared with Langkasuka Hotel (this i got to recheck) and they had shuttles to take guests there in case anyone would like to have a go take a dip in the jellyfish-infested waters of Langkawi (ok i'm overexaggerating on this one =P).

according to the website, room prices start from RM 230 nett per room per night, and i think you can get better rates online rather than purchasing directly. 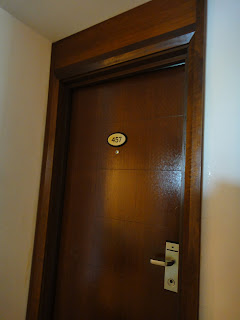 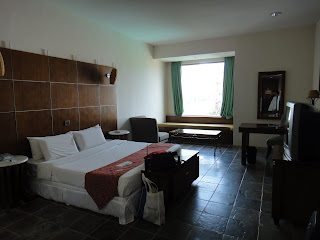 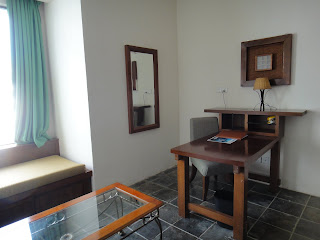 the room interior
i was quite happy with the room view. i love the window seat. the room was facing the swimming pool (not that i actually cared), but i was more happy with the view beyond the hotel. 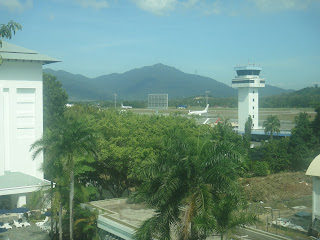 my room view, facing the pool, overlooking the airport
the view of the planes departing and landing at the airport. such a remarkable sight!!! lots of AA planes landing and taking off. so okay, please bear with me who loves to gawk at planes, doesn't matter whether they're stationary or in the air. i've never actually bothered to understand the principle of how planes take flight, until the day someone decided to enroll into flying school (he kept saying it would be an insult if i didn't know all this. pfft. who again is enrolled in flying skool?). 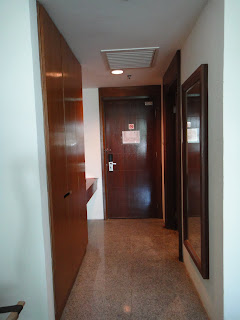 the hallway. bathroom to the right 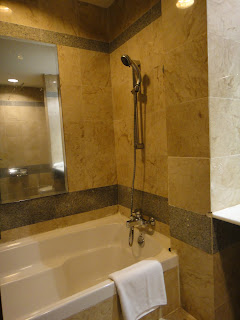 the basic shower + bathtub, with the old-fashioned stopper 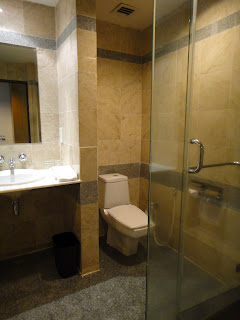 toilet and the shower 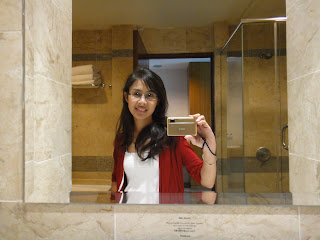 ok that's me camwhoring at the bathroom sink =P
everything was really peachy... until i realized that one of the main lights in the room (mounted on the wall) wasn't working. so the room seemed really dimmer than normal, it made for a perfect romantic setting. hahahahahah. on the second day of my stay did i call someone at maintenance to get it fixed. the call was actually to replace the bulb for the lamp at the study table but after fiddling with the switch, it suddenly decided to stay lit. and the maintenance people realized that for the wall light, the wasn't the bulb that was the problem, but the light itself (or something like that, since they had to dismantle the whole thing) and in their haste they managed to let a bulb drop to the floor and smash into smithereens (lucky they didn't drop the light. hahahaha). this reminds me of a little joke i used to hear while growing up:

how many people does it take to fix a light?
in One Helang Hotel, it apparently takes THREE.

hahaha. little hotel humor for you.
seriously, it really did take three people to troubleshoot and fix the light problem.

on the first day of our arrival, we had hot water. Significant Other happily officiated the bathtub. but the next day, hot water was nada. haih. what was available was only cold water. grrr. called reception, they said they'd been having an intermittent problem with the water heater in the hotel, said that their people were looking into it and would probably be fixed by lunchtime.

they were wrong. right up until the day we checked out on Wednesday, there wasn't any hot water. Tuesday night Significant Other was desperate for a hot bath he practically boiled hot water in the electric kettle and kept dumping the hot water into the bathtub repeatedly. kggal. at one point he had this 'supposedly brilliant idea', but all he managed to do was to shortcircuit the power in the room. wahhahahahhaha (we were lucky it was just the room, and not the whole hotel).

heck, in AB Motel, if you wanted a room with hot water, you had to pay rm20 extra. so... does this mean we get a discount since we didn't have hot water during our stay? NOT.

oh for once, breakfast was inclusive for our stay. you pay a much better price for the breakfast vouchers if you purchased them a day before instead of the day itself. the first morning at around 9ish the restaurant was jammed packed with people, you practically had to queue for all the good stuff. but seriously i'd rather drive out and find a good stall that sells roti canai or nasi lemak. beats the price by a whole mile.

the second day of breakfast, we went down early due to having to have to send the car for servicing. so at 7amish the dining area was practically deserted. unfortunately no waffles served for breakfast, unlike the day before (phooey).

since i didn't really go anywhere during my stay here, i took the opportunity to do a little laundry in the room, although the process of drying took longer than usual. heck, i think the clothes would dry much faster if i just left them baking in the car, it's thaaat hot in Langkawi @_@.

this hotel wasn't a member of SPG, so you had to pay extra by the hour if you plan to extend your checkout time. my flight back home wasn't until 8.55pm so Significant Other suggested that i extended my stay for about 3 hours (checkout at 3pm). i misplaced the little leaflet the hotel presented me indicating the extra charges incurred for late checkouts but i remember that a 3 -hour extension costed me rm30. i vaguely recall that if you decided to stay until 6pm, then that would cost you about rm80, but i need to reconfirm this.

verdict:
1. would have been lovelier if the hot water escapade didn't happen.

2. also, the one of the room lights weren't working when i first stepped into the room. the room didn't have any ceiling lights, just wall lights. a bit dim for my liking. but at least they managed to solve the problem, unlike the hot water issue.

so... those are my own personal reviews on all three hotels i've stayed in so far in Langkawi. with the exception of AB Motel of course. i must remind myself to write one for it.

hahaha... what can I say? I'm easily pleased. "what, view of another building? an ugly-looking one too? okay." *shuts curtains* lol!


what did akbar do to short-circuit the room? hahaha.. btw, one of the lamps in our room was out too!
and oh, i dreamt about jim carrey one night thanks to the repeated playing of yes man!!! :-S all the other channels were blurry so we kept it on in the background while Hubs was on his ipad and I was reading. tsk