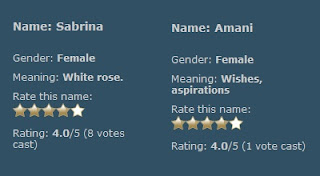 couldn't find the meaning for their first names, though.

on another note, yesterday morning Dayana woke me up as early as 7am and said,

i don't think she knows how to describe the terrible smell emitting from her sister's diaper. wahahaha.

and last night she came to me and said she was going to sleep with bibik later, and told me not to get angry at her nanti, ok?

she actually remembers earlier that morning i scolded her because she woke up and made too much noise (sibuks nak mintak susu lagi) until her adik woke up too. lol. these two are such early risers @_@.
from my rose garden, E`n1x at 5:19 PM