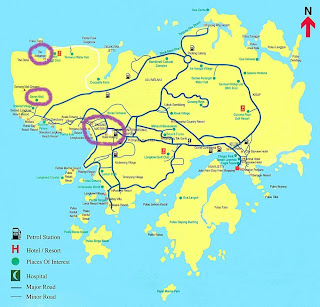 image from Google. circles on the map are where i basically spent my hols
during his Baker days, he collected quite a number of SPG (SPG: starwood preferred guest) points. so... the first night Significant Other redeemed 4,000 Starpoints and $60 for a night's stay here: 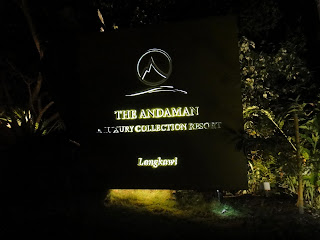 the Andaman, Langkawi
a member of the Starwood Hotels and Resorts, the Andaman is situated practically in the middle of nowhere, haha. ok i'm kidding. just head towards Teluk Datai and you'll reach the hotel just before you reach the Datai. the location is really secluded, you won't get a proper phone signal during your journey to the hotel.

but the place is gorgeous. the Andaman is surrounded by one of the world's oldest rainforests, so that kind of brings exclusiveness to the hotel. here you can find many 'posh' visitors, which is no wonder, since a stay here starts from rm1,050 a night. this was our second time staying at the hotel. to Significant Other, for the price that you pay, it is better that you spend 100% of the time here in your room to get your money's worth =D

breakfast wasn't inclusive for our stay. it didn't matter really (i'd rather go find a nearest mamak stall... aihhh kemut betul diriku ini =P~). the room itself was cozy already! Significant Other didn't understand how hotel beds are always the best - he was comparing to our mattress at home, as expensive as it was, it could never beat the comfort of any hotel bed. so... what's the secret??? =P. 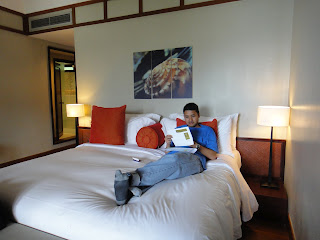 the king-size luxurious bed
we had the most loveliest view of the Andaman's private beach. on the balcony doors there was a sign saying to always keep the balcony doors closed - monkeys had a tendency of breaking in. there's also an espresso machine in the room for coffee lovers, complete with 4 complimentary capsules. i tried making a cup, and since i'm no coffee lover i didn't really appreciate the machine that much =P. 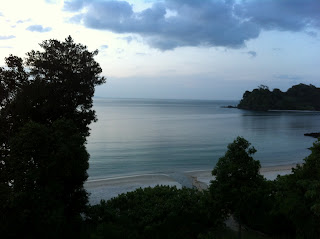 seaview just before sunset
and the bathroom? lovely. if i ever have the rezeki to build my own house, i want our bathroom to be modeled to the likes of that. with a walk-in closet of course, haha. the first thing Significant Other did was to take a soak in the bathtub (kesian, rumah kitorang manade bathtub2 nih). the hairdryer is super best too. you can dry your clothes with it like, instantly. wahahhahahahah.

oh they also have this cool digital scale in the bathroom. and so the other day i tweeted:
'i weighed myself naked: 40kg. i weighed myself fully clothed: 40.6kg ahahahahhaahhahaha' 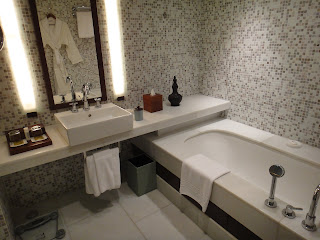 the spacious bathroom
we ordered dine-in for lunch since we didn't want to drive out. ridiculously expensive if you ask me. rm43 for a burger? if you're a tourist from a country with a better exchange rate, rm43 is nothing. so we shared a meal between us. yummy, yes indeed. hole in pocket? that too. 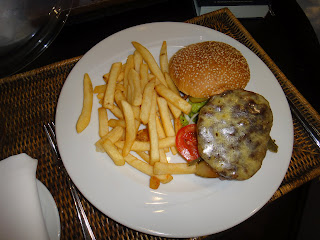 the super-spensive burger haha
our first night however, we drove out to Kuah town to have dinner with a good friend of ours who happened to be in Langkawi the same time we were there. Significant Other introduced Wan Thai, a thai restaurant situated in 'Langkawi Mall'. do not be fooled by the term 'MALL'. probably they could change the name to 'Langkawi Walk' or something. to me the restaurant was situated among buildings, and not inside a mall. ntah la. anyway landmarks for this restaurant is KFC, and is located right next to Bahagia Hotel.

we miscalculated how far the Andaman actually was from Kuah so we arrived rather late (sorry babe -__-). the place was fully booked @_@. initially we were told the waiting time was 50 minutes, but i think Significant Other's luck worked, right after he parked the car, there was an empty table waiting for us, yay. 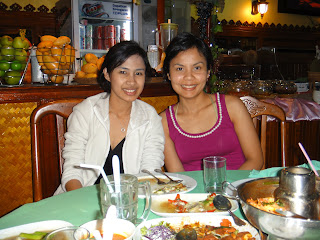 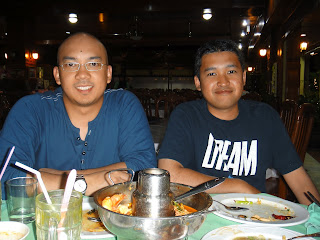 the them
serious sedap. i didn't know how but we managed to finish all the dishes between the four of us, minus the tomyam. the tomyam was nice but it wasn't really my style of tomyam. anyway... you should give it a try if you ever drop by Langkawi. i'd recommend you to reserve in advance though. i heard tourists come by the busload to try this restaurant @_@.

the hotel has many other tours and activities for guests to participate in, for a price. they have wonderful spas here too. i only registered for the complimentary nature walk (free ma =P). as expected Significant Other refused to follow, instead decided to rise to the challenge to waking up late T__T. only three of us participated, four if you count the tour guide. the other two was a couple on their honeymoon, inai was still visible on their fingers.

ok only now i just know that a banana tree would bear fruit once in its entire lifetime. hahaha even Significant Other knew that, chis.

i got to see with my own eyes a monkey patrolling the balconies and actually trying to pull the balcony doors open and break into the rooms. smart wooo the monkeys @_@. our tour guide mentioned that once a tourist left the balcony doors open, went to the bathroom and when he came out, he found a group of monkeys in his room watching television. and between water and a can of beer, the monkey would take the beer @_@. 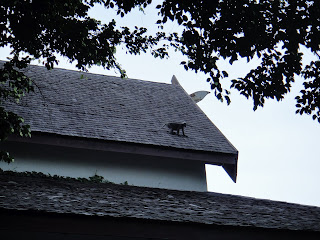 the evil monkey plotting it's next steal
oh according to the tour guide, Daia (who studied marine bio btw), there are more visitors to the Andaman compared to the Datai. and the Datai is much higher priced than the Andaman. so maybe that's one of the reasons..? 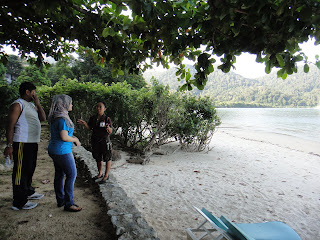 morning walk participants. the tiny one's Daia, our tour guide
after checking out and leaving our bags at reception, we went for a swim! or more like soaking in the pool. it was hot hot hot hot hot hot hot hot hot, we were literally baking ourselves in the sun. i know many of the tourists were, they love a good suntan. and then after that we headed for the beach. just to take pics. i'm not sure why i'm not such an enthusiastic beach fan. 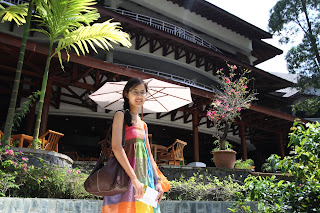 that's the restaurant in the background 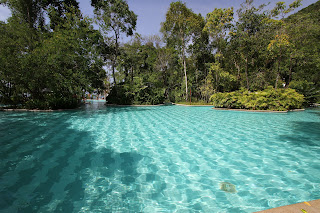 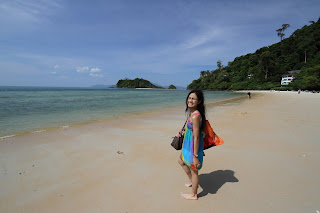 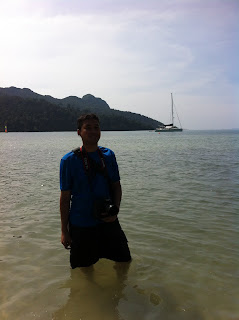 wading in the hot sun. i wish i had a yacht
the Andaman has a coral farm too, you know. it was recently established in December 2011, a little pool where they restore coral before putting them back into the ocean. the hotel holds quite a number of coral-related activities, you just need to contact the front desk for more details. we only went there to take pics =P. 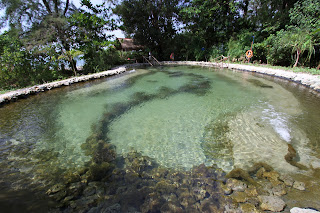 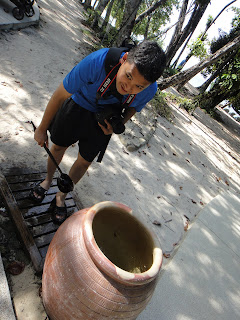 cleaning the sand on our feet
verdict:
1.our first visit was so much more pleasant than our second visit, in terms of treatment comparison. for one thing, during our first visit, when we arrived at the front door there was someone there to help park our car while we went to check-in (strike!).

2.according to Significant Other, the staff didn't seem as friendly as last time. they didn't smile as much (strike lagi?). i barely noticed. i was too busy trying to absorb the Andaman's surroundings a second time.

3.as an SPG member Significant Other requested for late checkout during check-in but the request wasn't immediately granted. he had to complain at reception before they finally allowed a two-hour extension, due to the hotel being fully booked. also, he told me the person at reception didn't seem to believe that he was a gold member status (strike!). in my opinion, the hotel looked totally empty, so who's to say what they're telling us is true? go figure. i didn't want to make a scene.

thumbs up to the Andaman, i'd definitely come again =).

more pics later. i think that's the wrong monkey picture i posted there. there's two types of monkeys lurking around the Andaman. one is good, one is evil. kah kah
from my rose garden, E`n1x at 12:45 PM