i'm backk... to work that is. you can't imagine how i was dreading this day, i even had this queasy feeling in the pit of my stomach when i woke up this morning.

i'm contemplating another move again. this one could be permanent. so i might be letting go a number of perks, but i'll be gaining in other areas that i previously didn't. what say you? er, is this cryptic enough? sometimes i wonder, would i even get what i'm saying 20 years down the line? haha.

Significant Other bought me an early birthday gift this year. and being the dummy Sagittarius that i am, i kinda fail at displaying my excitement, much to his disappointment (although, deep down i am really really really excited that i have now have a new gadget to record the milestones of my 2 kids!!!! yay!!!! =D). no more excuse for the future question of why are there more photos of the eldest compared to the rest of the other kids, if any one of them decides to interrogate on the matter. lol.

about the 2 little rascals, let's backtrack for abit, shall we? Dinara turned 2 months last month, and the terrible-2 kid is now 2 years 2 months old. since my memory has been fried due to giving birth twice, i'm no longer writing an in-depth progress of my kids, but will chuck info here and there where i seem fit (in other words, when i actually remember to, lol). no harm in reading through my rambings and rants ey? =P~~~ feel free to volunteer to be my subject to torture if you please. 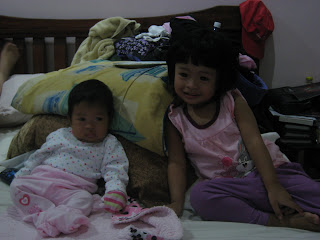 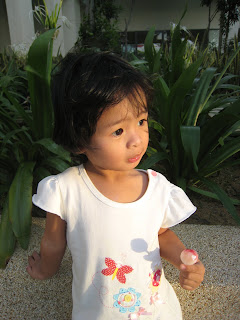 - loves camwhoring. loves looking at herself in mirrors. gets that from her Daddy. insists you take her photo first before allowing you to take others
- cannot pronounce the letter 'L' properly (anak Cinakah?)
- likes to punctuate her sentences with 'lah'. 'Elmo-lah!'
- sudah pandai throw tantrum at shopping malls
- an excellent iPhone user. so excellent that she can already screw up my icons in the menu. the other day she showed my mom how to play this ice cream game application, complete with what to 'tekan'. lol. whenever she wants the iPhone she'll say, 'Mommy nak ABC!'
- her bestie apart from Chewy would be 'Ayame' - previously known as 'Barney'. at one time it got muddled to 'Babi' in my attempt to teach her to say 'Barbie'. hoho.
- pantang ajak jalan. will angkut her bottle, her toys, her Chewy, anything that she can hold by herself (she refuses to allow me to stuff them into my bag), insist i hold them for her when going down the stairs, and she'll be the first one out the door for fear of being left behind. lol.

am a little concerned about her milestones and am contemplating sending her to dayschool next year.
she has yet to get her 1.8 months and 2yo jab. 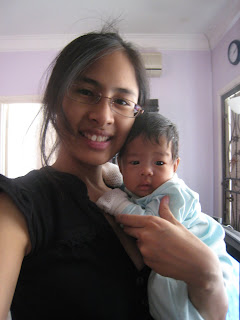 - 4.1kg at 2 months ain't that bad at all =). her Grandad says she'll definitely surpass her elder sister soon enough
- definitely loves bathtime. still does. never cries before, during or after, unless she's super hungry. but most of the times she absolutely loves the attention i give her
- she can cry nonstop in the car seat until she's red in the face and will abruptly stop in a way that worries you sometimes. doesn't matter whether the car is moving or not, it all depends on her mood.
- rejects her pacifier. instead she prefers to stuff her tiny fist into her mouth. sometimes i see Dayana staring and doesn't seem to understand why her little sister does that, lol
- if you give her a few minutes of your time to bring your face close to hers and talk to her she will happily respond to you =)

i babywear Dinara everytime we go out now, and NIP practically everywhere just because i am too malas to handle EBM outside of the house. haha. i'm starting to appreciate my ring slings long tails alot more too. i don't need my nursing cover anymore (except for when i express during office hours). i consider myself a pro *ahem* at cradle carry, but i totally forgot how to do t2t since i'm at a loss at how to coordinate the baby's legs properly - not forgetting proper head support too. and i'm at 0% at pouch wearing. heu~~~. my wraps are underutilized now. please forbid me from wraps from this day on. heck, one of it is now being utilized as a cover for my bed's headboard. haha.

babywearing is fun btw. at times people don't seem to notice there's a tiny human being in there, keke.

that's it from me. will be heading to SR later to get a progress stat - i want this unit up and running, one less subject to think about later @_@.
from my rose garden, E`n1x at 5:41 PM

changing work again dear ?
Well if u feel it is best for u then dont stop :)

lol. that obvious?
my only justification is the word: p.e.r.m.anent.
hey congrats on ur engagement. heard it from Najua, although i think i may have gotten u mixed up with your other besties because all of you seem to be tying the knot in unison =P