2 weddings, a party, a car breakdown and a funeral

i realized lately ever since she turned 3 months old Dinara loves to stick out her tongue. really, it's like she just realized she has a tongue to stick out. haha.

"blekkk~~~~"
oh and Dayana, whenever i scold her, she'll look for Daddy for sympathy, and vice versa. pandai ohh this one. haha.

let's start with me being dulang girl, shall we? the term 'dulang girl' has been coined by the bride herself, so i shall not complain further for i might induce the bridezilla to run amok haha. i remember Jo asking me to be her dulang girl aeons ago so i absent-mindedly said yes because weddings were fun and i didn't mind helping out. lol. Dini was supposed to be dulang girl as well but fate be have it, she fell down the stairs literally and broke her ankle (ouch).

so on Friday i took half day off from work and carpooled with Dini to get there. we were both going stag, so i guess two's company? lol. i pratically didn't know anyone there save for the bride and groom. my baju nikah was cream color, so i didn't have to worry about looking for a suitable outfit and i was lucky that i could still FIT into it hahahahha. heck i even bought colored contacts for the event just to melaram skali skala =P~~~~~. but imo i look weird without glasses, i'm so used to seeing myself with them.

and so it was a tearful event, lol. simple yet sweet. Fahmi's reception will be this weekend at Dewan Perdana Felda (Jo's reception was the day after, which happened to clash with another reception me and Significant Other went to). congrats to these two lovebirds. it's maddening to see them camwhoring everywhere they go, hahahhahaha. proof: blog of Fahmi. p/s. please blog more, ever since you got tied up, you seem to be writing less and less! 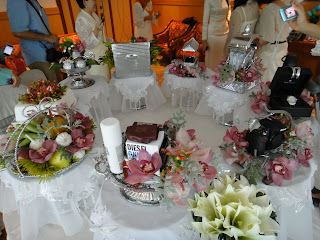 the hantaran. see the toiletries? 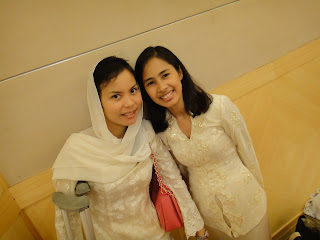 dini, me & the crutch 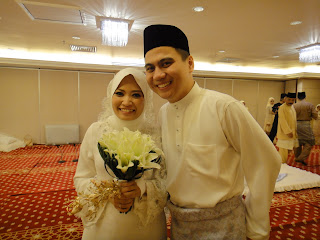 the bride & groom
made a new friend that day, Azlina, formerly a PwC-ian, gave her a ride back home =) in the usual Friday jam. the more the merrier, aite? i've almost forgotten how terrible the jams were during rush hour. i'm due to be experiencing that again real soon :S.

so on Saturday i had to opportunity to bring the kids to Kidz Sport at OU for the first time (thanks Lita! =) a very happy birthday to Aariz!). it was just me and the kids as usual, and i was lucky Dayana was in a cooperative mood as we made our way from the new wing (my usual parking territory) to the old wing, haha. being our first time there i didn't know we had to wear socks, so there goes my $$ that day to two pairs of socks. haha. at least now Dayana has her very own pair of socks, i don't think i've ever bought her a pair except for those given to us as gifts. hee~ (kedekut Mommy!).

decided to come earlier as i had a wedding reception to attend later in the evening so i wanted to give Dayana an opportunity to explore before rushing her back home again, lol. luck has it the rest of the peeps were still on their way so looked like Dayana had to play on her own for a little while.

while others prefer to dive into the balls, Dayana preferred to collect stray balls and put them back into the ball area. she seemed rather skeptical at sliding down into a bunch of balls, lol. we didn't have time to cover the entire play area though =(. perhaps next time? i sempat jumpe a very pregnant ito, pwiddy as always =D.

i couldn't get nicer photos of Dayana though, she was too busy running around and didn't bother to stop to take photos. tsk. 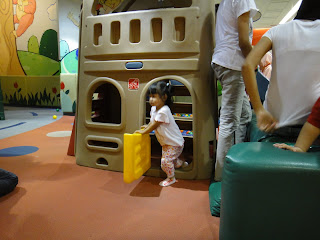 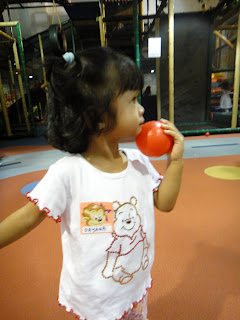 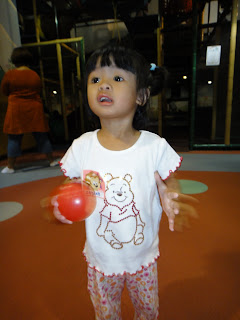 at this age Dayana already knows that when there's a candle with cakes on it, it's happy birthday to you time. she's improving on her candle-blowing skill too haha (she had practice during Mommy's birthday). you can see just how enthralled she was just looking at the cake! the cake was chocolate peppermint btw. absolute yumminess imo =D. 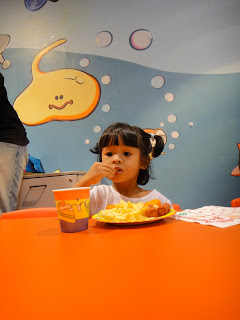 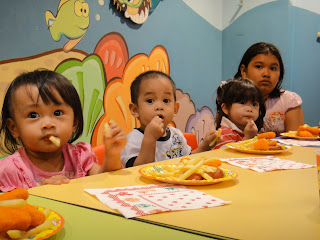 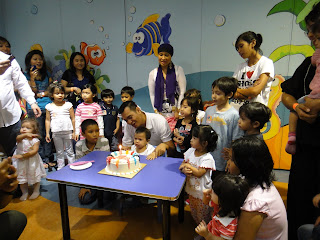 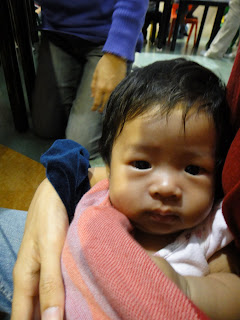 what Sleeping Beauty was doing the whole time
as expected, her party pack included some Princess stickers, but she caught a glimpse at another boy's party pack and insisted on Mickey Mouse instead, haha. then she went round showing off her stickers to anyone who would listen to her, totally ignoring her food, which her mommy ended up eating hahahahahaha. her stickers are now successfully scattered all over her play pen.
Dinara spent time chilling out with Uncle Nizam, she was such an angel in the car on the way to OU. too bad the same can't be said for the journey back home lol.

so what were the other mamas doing? busy checking out lix's new gadget =P. should i be sorry that i'm an iPhone user? haha. later when i left i found out the mamas continued gawking over berihitam at... guess where? 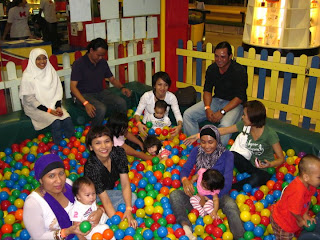 being 5 again
that evening me and Significant Other attended a friend's wedding reception in Shah Alam. we left the kids at home this time. as usual Significant Other decided to arrived very fashionably late, but just in time i might add, 5 seconds before the bride and groom arrived at the front door, haha. 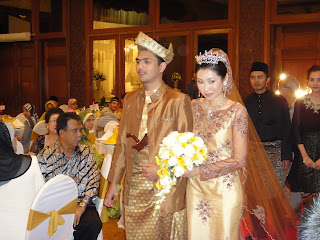 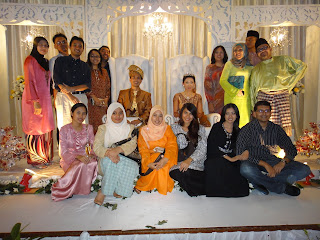 the ex-PwCians
so the groom finally got his bride. lol. Shasha looked absolutely gorgeous as always (i didn't know you switched telco. any chance of turning yellow later on?). and Najua's Aisha is just adorable!!!

later in the evening Significant Other's friends came over for abit to lepak. Dayana was simply excited to have visitors over. insisted to show off her iTouch to Uncle Rijal (haha) and later handed him a crayon and asked him to draw in her new notebook, part of the party pack she received during the birthday party.

the final part of this chapter would be about my beloved Neo, which happened before the abovetold events. i happened to get caught in the rain one day when i was visiting SR and came down with a terrible fit of sneezes which left my brain rattling in my skull. so i took the opportunity to run errands while i have the time away from work, sick or no sick.

it started out with the aircond not functioning. i was like bahh, is it time to service the aircond already? my car was already due for its 90km service so i thought i'd wait until i was work-free to send my car for servicing and other miscellaneous fixes one shot - my brakepads were due to be changed too.

as luck would have it, the owner of one of the cars i was blocking arrived. i thought i'd already be D.O.A. but instead she was really kind to help me move (or push is more like it) my car out of the way to reverse her car out, and then stopped to help me push my car into her parking space so that i wouldn't block traffic. is that nice or what??? you don't get people like that these days. to that kind person, thank you so much!

with no idea what to do, i called my brother. luckily he was working night shift that week, so he got his ass over to help me out =D. seemed that the engine overheated and i didn't realize it (which later turned out to be faulty wiring, phewww). luckily after the engine cooled down abit i was able to start up the car so i drove to Proton Mutiara and went back home with my brother. got ourselves hotdogs and curry puffs at Ikea. and i got to eat meatballs while waiting for my brother to arrive =P. thanks to my brother to for helping me collect the car yesterday. i owe you steak ok. haha.

heheeheh great entry lily..ingatkan apa la died-ed.
See you at Fahmi's recep nanti and hopefully we can catch up stories :)
hey i loike ur new shoulder length hair , should have let it down that night..i think mcm its the style now..even ity have the same style like urs :)

hey sha =P. i look like makcik kah with my hair up haha. wanted to leave it down but my hair macam kene karan -.- and i haven't cut my hair since i was pregnant in my first trimester. my hair grows really slow @_@
see you at Fahmi's reception nanti! lol