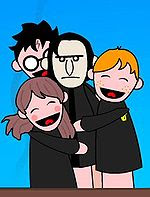 pic source: google
Salam Aidiladha from all of us here in the Monsoon road, including Severus Snape, Harry, Ron & Hermione =D

we'll be celebrating Aidiladha here in KL, since we both didn't take any additional leave and don't have plans to go anywhere yet (also i'm out of leave balances, all taken to extend my maternity leave =P). big shout out to Wan, Sue, Sarah & Izzah back in KT! *woot woot*

the much awaited Harry Potter movie is premiering this week! *shuffle shuffle ala macam that guy in Waktu Rehat LOL* Significant Other isn't much of a fan though, he prefers movies that involve vampires and wandering half-dead zombies than magic =P (but oddly enough he happens to like 'The Sorcerer's Apprentice'... which involves magic? go figure). my colleague even went all the way to Sunway during lunch hour yesterday to queue up for first day tickets, haha. when will i be able to see it??? sure ramai gila orang serbu cinema for the next few weeks, not to mention school holiday has already started. fufufufufu~~~~ shall i bring Dinara along for her very first movie? LOL.

i don't care i'm going back early today to pick up ketupat for Mommy, i hope today's traffic isn't as bad as yesterday. yesterday was total hell @_@. my parents left for Terengganu yesterday night, and i've sent my Neo to represent us for not being there (haha).

so today i was late for work because... i absolutely fail at parking a Mercedes.