kids learn fast. the other time the kids were fighting over something and i overheard Dayana tell her little sister something along the lines of, 'gimme adik! 1! 2! 3!'

Dinara learns quite abit from Sesame Street reruns we play for her on the telly every day (she can also memorize dialogues from certain Disney movies, thanks to a gazillion times of nonstop neverending reruns which she never seems to get tired of). she's familiar with most of the nursery songs, and she knows how to count from watching Sesame Street (although i don't think she gets the actual meaning of the numbers yet).

anyway, with regards to the earlier story above, i was putting the kids to bed and we were deciding on what song to sing before saying goodnight. Dayana suggested to sing ABC, but Dinara was quick enough to interject by saying 'no! 1! 2! 3! 4! 5! 6!'


Daddy and the Princess

one of the kids' favorite storybooks would be 'I Want to be a Princess', a hardcover book i bought for them a long time ago. being the little girls that they are, they're overly obsessed over three things: princesses, barbies, and PINK. recently Dinara has started to actually read books instead of destroying them. so that particular book, she and her sister will share and drool over all the princess pictures and go 'yada yada mommy can i be a princess?' and sometimes get me to read it to them before bedtime.

and they would fight over the princess tiara i had bought for Dayana back when Dinara didn't know the existence of princess and barbies and iPods (so now it seems i need to get stuff for them in sets of two now in order to avoid petty fights such as this since they obviously do not mesh with the word 'SHARE').

yesterday Dinara sat beside me on the bed and pointed to pictures in the book, telling me what each of them were. like 'apple', or 'shoes', or 'i-keem'.

the last page shows the Princess and her Prince Charming, with a green frog overlooking the two in the background. 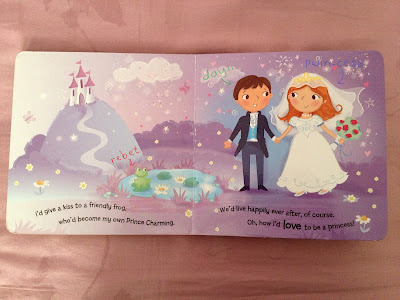 'rebet', Dinara tells me, pointing to the frog. she began to start hopping up and down on the bed.

'Dayiiiii', she exclaims, referring to her Daddy while pointing to Prince Charming.

'clever girl,' i tell her. 'now who's this?' i ask, pointing to the Princess.

'pwin-Chess!' she tells me triumphantly.