our second day here involved getting the kids out of bed in the morning for breakfast. Significant Other had a paintball session that morning and so told us to utilize the breakfast coupon. obliged mainly because i was hungry =P. yesterday after Significant Other got back to the room we went out for dinner because i was starvinggggg. i had rice with oh-so-yummy tomyam, telur dadar and kailan ikan masin - what i always used to order back in my Uni days during our dinner outings to Batu Gajah. my partner in crime would be Mahani, lol, she was always up for anything (which is why i love+hate her, hahahah). 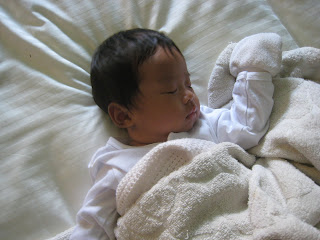 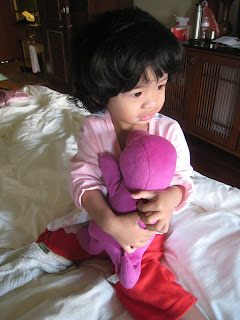 the kids in baru bangun mode
after breakfast (in which Dayana would only allow me to feed her a small quantity of bihun with the rest ending up all over the table and the floor =D) we took a stroll around the chalets. seems like they're all interconnected to each other, so we could just enter any row of chalets and eventually end up back at our room =D. the sun was starting to scortch after that, so we didn't stay out long. dropped by the hotel pool but there were just too many people occupying it @_@. and the sun was already bearing down on our necks to be out playing at the playground without having to end up being hangus-ed =P. 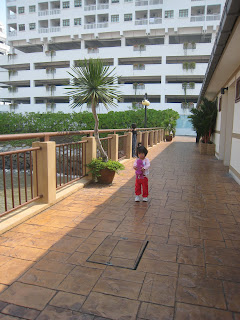 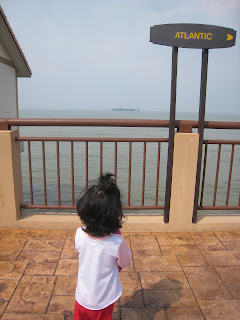 this way to the Atlantic! 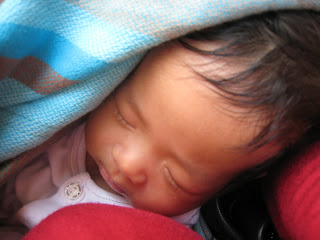 princess #2 sound asleep cradle carry
took another swim in the bathtub with the kids, Dinara included. i think Dayana was already opening up to the term 'swimming' haha. the last time i brought her to the beach she screamed her head off punye la tak nak set foot on the sand, and even when i brought her into the water she was terrified of the waves.

by lunchtime we had to pack up because checkout was at noon. went to check out the beach so dropped by the beaches nearby Avillion. the sun was still bringing it on so we didn't venture near the water, just sat under the shade of a very thin tree and allowed Dayana to play with the dry sand using the sandcastle set her Daddy just bought for her. she seemed intrigued with it. or maybe she enjoys the scooping and pouring part. haha. 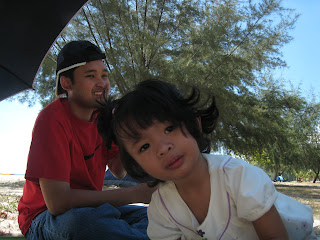 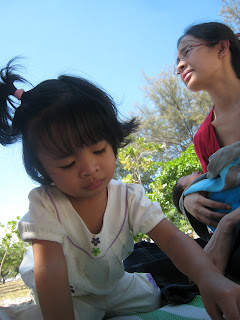 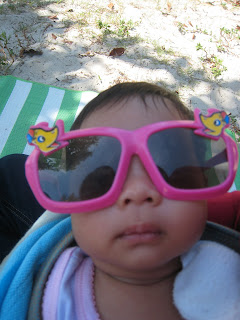 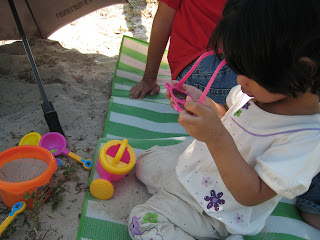 the sandcastle engineer wannabe
before heading back home, we dropped by this restaurant Significant Other had been to previously during his ex-company's weekend away day. he said the seafood was good, and we should try it. so we did, me paying (only because Significant Other had already had his lunch and i was still starving so anything that comes, goes). we were lucky we arrived there when we did, they were just about to close for the day and would only repoen a couple of hours later. so we ordered, and by the time our food arrived (Which was quick because we were practically one of the very last customers there) everyone including the waiters, chefs, and cashiers had gone home. hahahahahha. we had to leave by the side door. Dayana was more interested in exploring than having her lunch T_T.