so it looks like i finally got to utilize my Indian Visa before it expired! bahahahhaha.
second day of raya and the husband has to report for duty already. 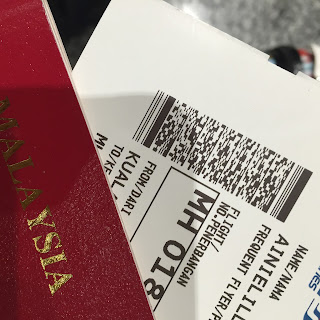 i had just gotten back from beraya-ing at my Uncle's house and made the decision to drop the kids off at my mom's for a few days. i was already running late when i headed to the airport, i checked-in just about an hour before departure. luck was on my side because unlike the last time, the husband's prior flight landed in KLIA on time, yayyyy (although they still were about 20 minutes late).

luckily i didn't dilly dally, you should've seen the queue to board, panjang gila. i think most of the passengers were local.


whilst queuing the husband called me excitedly saying the he was doing walkaround now, and i should go see and take photos if i could. now, 1) among all those tiny people wandering outside the aircraft, how the heck do i know which one is you?, 2) am i even taking photos of the correct aircraft? i remember taking photos of  the supposed aircraft that i was to board only to be ushered to a totally different one hidden by the jet bridge structure afterwards. bahahhahaha.


estimated flight time: 4 hours 35 minutes. we took off late as usual due to traffic. it was a night flight, so there wasn't much to see out the window.

i am so not used to this class, btw. the fun side was that i got to try their food. i finally got to taste their infamous satay that the husband keeps raving about. not bad la actually.

did you know business class choice of entertainment is actually better than economy class? they actually have more movie choices to choose from (feel free to correct me if i'm wrong, as this is my first time in business class). there were a bunch of movies i haven't seen, but i chose to value my sleep more (old age is catching up omg). the husband insisted i test the Beats Solo that he recently purchased; its sound-cancellation feature was so awesome i could barely register everything else happening around me, haha.

many hours later.... imma in a different part of the world!


customs wasn't too bad lah when i arrived since there weren't a lot of people arriving in the middle of the night. by this time i was too tired to take any more photos (it was already past 3am back in Malaysia). once the crew reached their hotel they all disappeared into their rooms and are never to be seen again until their next duty period, hahahah.

i did take photos of the room, it's customary of course. the room had a view of the pool. if only i had more time to enjoy everything hehe. the hotel was considered to be so awesome i kept hearing about 'stairs in the bathroom' on the way to the hotel bahahahhaha can i remodel my bathroom at home to resemble theirs???